President of the UFC, the greatest promoter to ever do it, Mike’s former boss and long-time friend, Dana White, Skypes in for this episode. He and Mike talk about Tyron Woodley’s upcoming fight against Jake Paul, his honest opinion of Diego Sanchez, Joshua Fabia’s fixed fight accusations, the new season of The Ultimate Fighter, updates on Zabit Magomedsharipov and Khamzat Chimaev, and lots more! Be sure to hit that subscribe button and click the bell for notifications so you can watch the episodes as soon as they are released!

4:07 This is the only thing Diego Sanchez is guilty of

12:08 The UFC Apex is a game-changer for The Ultimate Fighter

21:17 What’s going on with Zabit Magomedsharipov and Khamzat Chimaev? 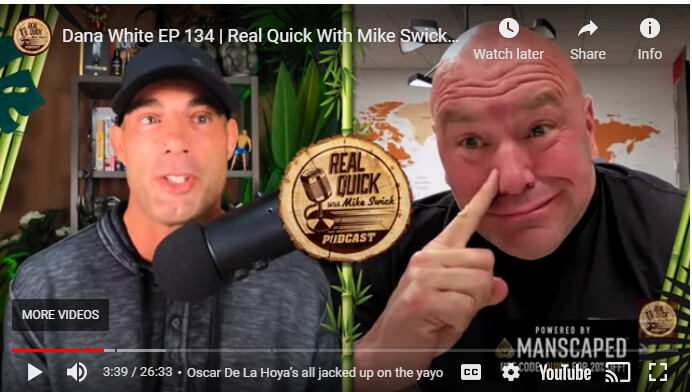 I skimmed the Diego shit, will watch the rest later.

Nice to hear people speak of Diego in a positive light, especially you two.

Another great one. Dana comes off really likeable in this interview.

I’m always in for Dana talking about De La Hoya

This joke is getting old, dana sometimes shows up in post fight press with such a red head cuz of high blood pressure, he sould be the last to joke about coke, oscar must live rent free in dana head