Dark Side of the Ring Season 3

The Dynamite show was good but odd.

I agree that his wife is just as insane as he was but his oldest daughter is as well.

Given all the talent they could use for interviews there was nobody from Bulldog’s family plus no Brett Hart. Like a wall of silence. Really Lance Storm was the only one who didn’t seem to condone what Dynamite did outside the ring. Dan Spivey seems to still think that putting Halcion in someones drink at a bar is a good rib and Foley couldn’t get over the giddiness of getting to talk about his hero.

Jericho said that Norton was the one who pulled him aside in WCW and told him the importance of standing up for himself. When Scott Hall yelled to Jericho “You expect to get paid for that??” after a match, Jericho went up to him in front of everyone and asked “Is there a problem?” Hall responded that there wasn’t.

He went on to tell a story about how Hall told him no one came to see him so be quick in the ring while the two were in WCW together.

“Scott Hall came up to me and told me that nobody was coming to see me, get in there, do your 5-10 minutes and get out,” Jericho recalled. “No one wants to see you. I remember thinking, wow, what an asshole. Why would you say that? I told Chris Benoit that, and Benoit was already furious with Scott Hall after Hall pissed on Chris Benoit’s cowboy boots by the urinals. He just leaned over while they were both pissing and he leaned to the side and pissed on his boots.”

Jericho went on to describe Hall as someone “whenever he talked to you, you just wanted to slap him in the face,” before telling another story about how Scott Norton threatened Jericho to stand up for himself with Hall or he was going to start bullying him.

Jericho continued, “When Scott made another comment I went up to Hall and said to never f–king talk to me like that again, you understand me? I told him that there was no rib, or no joke, don’t ever f–king talk to me like that again. He would tell me to calm down and that he was just joking, ‘geez Jericho, can’t you take a joke?’ I looked over at Scott Norton and he was just smiling like I did the right thing. That was a Scott Hall for you. He was always like that, which is a shame. He was obviously a great worker and a great performer but no love lost for him even until this day.”

Scott Norton having your back would make you brave real quick.

Hall sounds like he was a total dick but god damn he was so cool to 12 yr old shansky.

Agreed. I thought Scott Hall was the coolest.

I also didn’t appreciate how badass Scott Norton was until years later.

Also, Jericho apparently took that message to heart because he fought Goldberg, Sin Cara, and tried to fight Brock (lol).

I always hated Jericho’s gimmick but he came around when I grew tired of wrestling. Just did not want to see him in the ring or listen to him on the mic. It was not the heat they want to create, I just wanted to see him go away.

Anyone know how Dynamite Kid died? Just watched the episode and can’t find how he died anywhere

Anyone know how Dynamite Kid died? Just watched the episode and can’t find how he died anywhere

Don’t think they ever confirmed the cause of death but I know he had heart issues.

Bret must have not wanted to be part of this one, must not have wanted to tell those stories about Dynamite’s personal life.

As for the ex-wife and daughter…people make excuses for those they love and who have done a lot for them, so I don’t judge them. In fact I think it’s much more admirable than burying the person publicly and prattling on about how forever victimized they are. The ex obviously severed ties with him personally and the older daughter had almost no relationship with him either.

they could have done another hour on dynamite

guy was a mess

Here is the Dynamite episode. 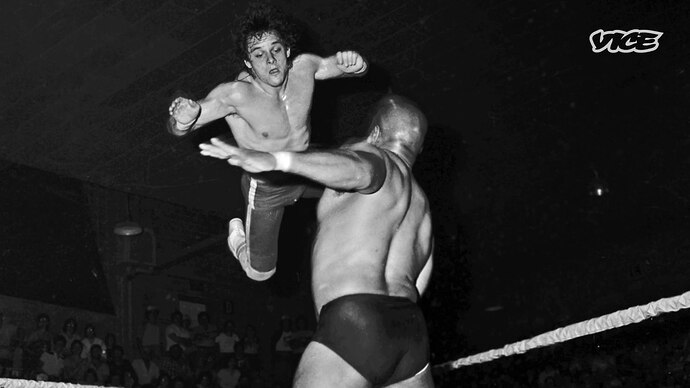 DARK SIDE OF THE RING | The Dynamite Kid - video Dailymotion

The Dynamite Kid earned worldwide fame with a riveting, self-sacrificing style, but violent confrontations outside the ring would destroy his family, his body and his legacy.

I based my life on the teachings of Billington and Sayama