I'm pretty sure that 75% of the Jalopnik readership is composed of warlords, dictators (deposed and serving), and various other fiercely important players in highly dangerous environments. I know I am. That's why I'm proud to present the global introduction of INKAS' new armored personnel carrier, the Huron.

The Huron is the absolute state-of-the-art in tactical attack and defense vehicles, and for those of us not in charge of SWAT teams or small armies, it's pretty amazing to see what these things are like. Here's what INKAS tells me about it:

Huron is a unique APC in terms of technical specifications, design and assembly. The vehicle is characterized by a high level of maneuverability and is extremely lightweight relative to its size. It incorporates revolutionary lightweight armor which increases its mobility and speed performance in comparison with the other similarly-sized vehicles in the market. Huron's well-proven off-road capabilities are supported by an 8.3L Paccar Engine and a ten-speed manual Allison Transmission. The OEM body of the vehicle was replaced with a fully re-designed body by INKAS® Armored Vehicle Manufacturing that incorporates heat and noise insulation materials providing an unprecedented level of comfort to its occupants.

And, if you guys know the sorts of weaponry your enemies use, here's a breakdown of the sorts of protection you'll have: 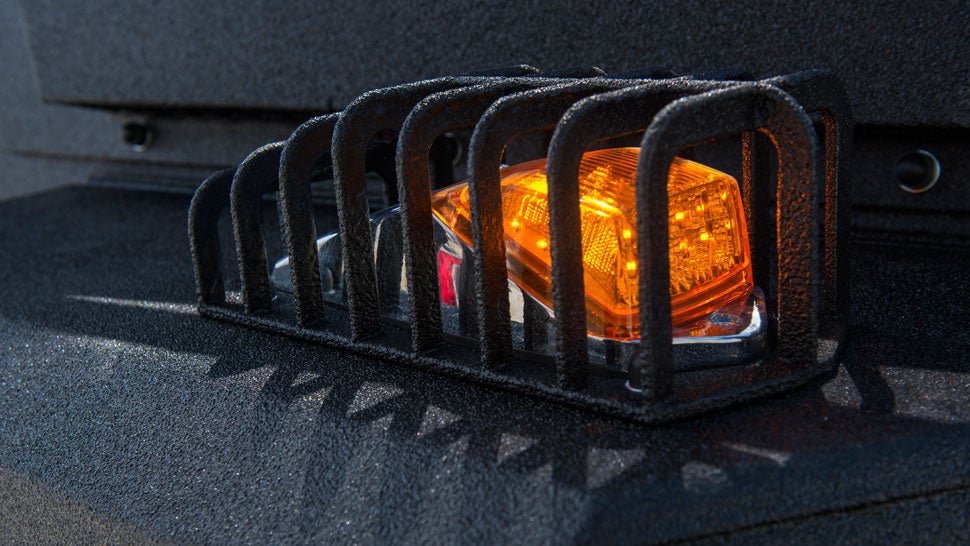 Hopefully, this gives you the information you need for your next armored personnel carrier purchase. Based on the pictures, the Huron does look pretty tough, and has what may be the most well-protected turn indicators in the history of motoring. That, or the most dangerous indicators that have to be kept in stout cages or they'll go right for your neck. 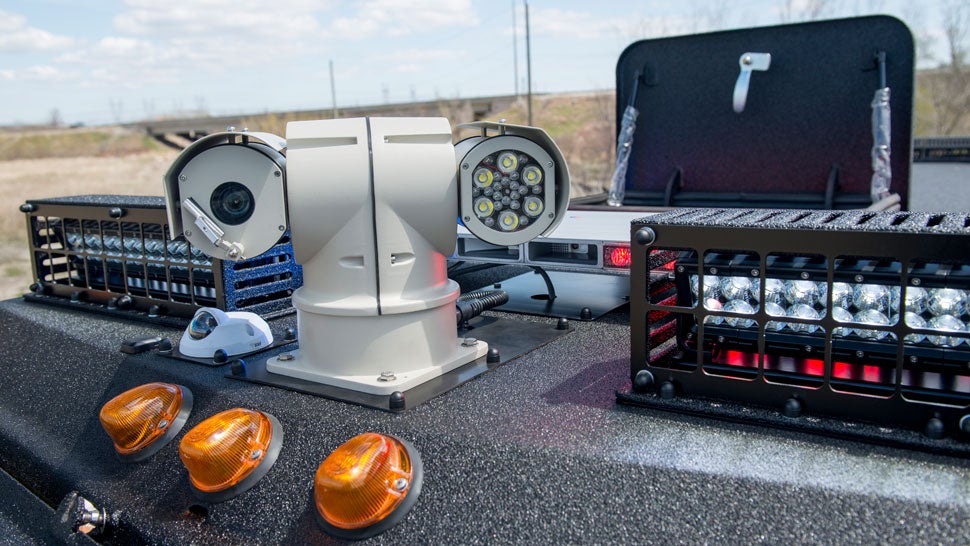 Up top appears to be a full surveillance/sensor suite, complete with a steerable camera with an adorable tiny wiper for the lens. The interior does have a bit of an imprisioned feel, but I suspect that's hard to avoid in a vehicle like this. 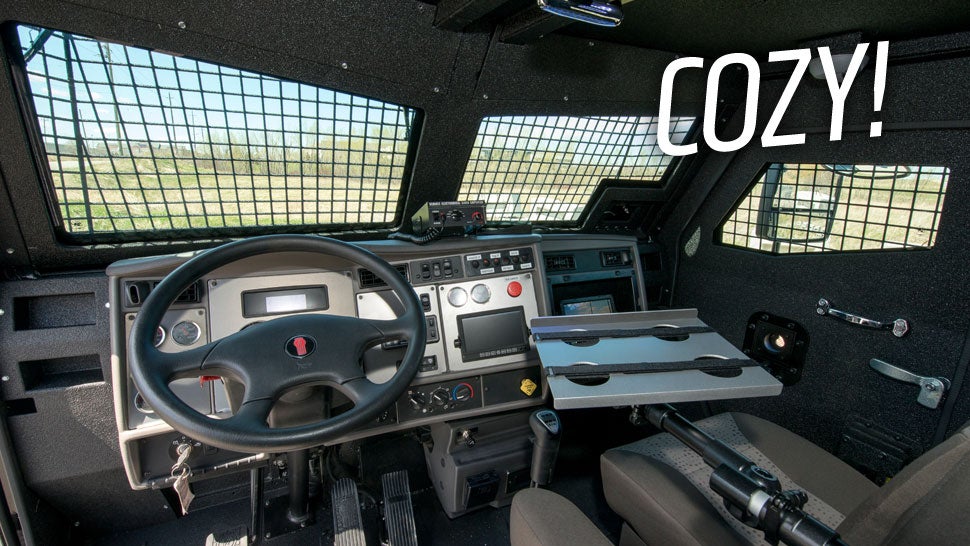 There's something strangely appealing about a vehicle like this -- the inside is such a protective little cocoon, and you can just imagine the sorts of adventures or situations you might be in inside one of these. Maybe appealing's not the right word. Somewhere between exciting and terrifying. 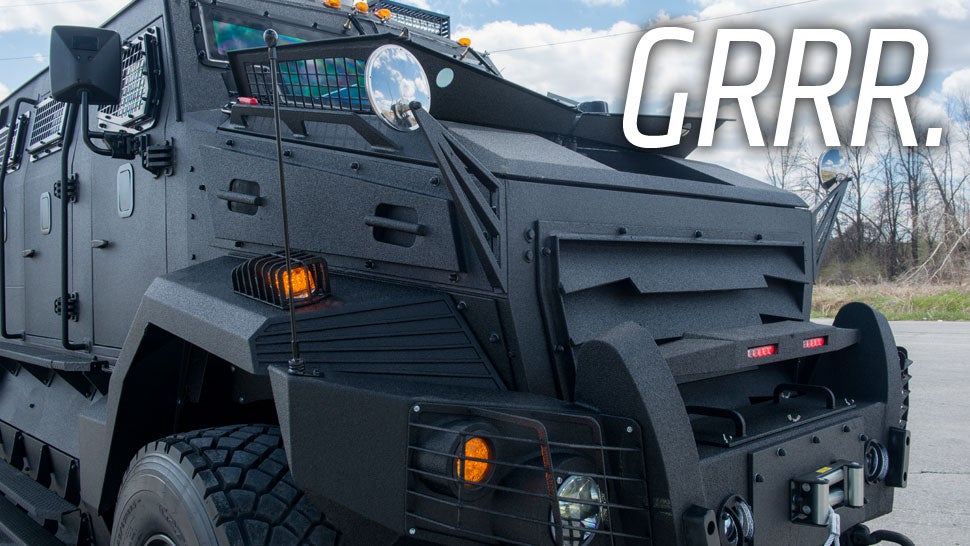 The first deliveries of these will be four to the National Police of Colombia, so if you're a Colombian on the wrong side of the law, now's a good time to start memorizing the light pattern of this beast. If you recognize it, I'd suggest running. 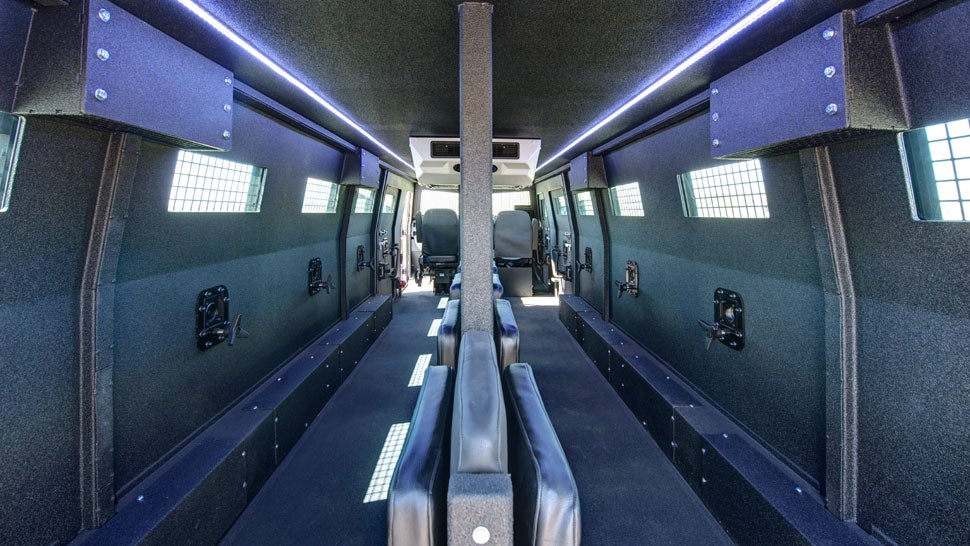 Also, this thing kind of looks like the bus you'd take to the apocalypse. 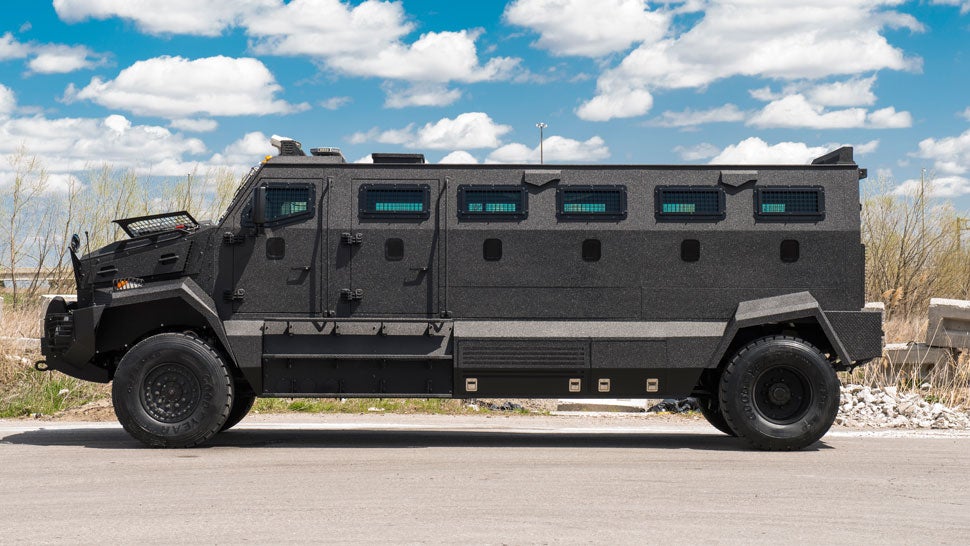 Great for zombie apocalypse and/or trips to Walmart.

WHAT ABOUT WHEN YOU WANT TO CHANGE A LIGHT BULB.........HAVE TO TAKE THE WHOLE DAMN THING APART LOL.

1 EFP and that is toast. It's just ment to look scary and cool, it would be done in a real war time scenario.

honestus - 1 EFP and that is toast. It's just ment to look scary and cool, it would be done in a real war time scenario.


Won't those also disable HMMWV's and MRAPS as well?

The "smallest vehicle I've seen stop an efp was a Stryker.

Friend of mine worked at Los Alamos doing research for this company's DARPA contract.

His team was tasked with the window seals - making them resistant to caustic, penetrative agents like nerve gas.

Ghost of Sex_Guy - The "smallest vehicle I've seen stop an efp was a Stryker.

Ghost of Sex_Guy - The "smallest vehicle I've seen stop an efp was a Stryker.

Did I read that right? It protects against New Jersey STD's?

Just toss a molotov of gas on any of the tires and wait for the rubber to melt and it's done.

If the occupants won't come out after the tires start melting, toss some wood under the vehicle and light it up. Cook em enough to give up.

RefriedJinx - Nice I wonder what the price is

What's the mileage on that thing? Will you have to fill up the tank after going half a block?

And it looks like the cockpit needs more cup holders.

Give it six months before you see one with laser lights and techno music carting people around Las Vegas.

Angle 5 - What's the mileage on that thing? Will you have to fill up the tank after going half a block?

And it looks like the cockpit needs more cup holders.

It's a hybrid, so you're looking at a good 7 mpg

ReneH - If the occupants won't come out after the tires start melting, toss some wood under the vehicle and light it up. Cook em enough to give up.

Up to twelve penises could emerge from the shooting ports and extinguish virtually any known thermal threat.

Large vehicles like this wont be stopped through fire or trying to blow out the tires. Most tactical vehicles have run flats and extra thick wall tires which will be pretty much useless to attack, its mobile so it'll just drive out of the kill zone or threat area.

Large tactical vehicles can be dealt with in 1 of 3 ways without using some sort of air support or missile system.


1 Large bombs (specifically EFP's, though this one looks like a regular bomb to the under carriage would destroy it)

Notice there is no angle of the floor to deflect the blast, this and the length make the floor weak and susceptible to attack. One blast from a med size IED and you will open that bus like a can of sardines.

2 Tandem warhead RPG's
Tandem warheads are designed against armor, ever notice the cage on a stryker? Yeah its to deflect against these. In one of the better armored vehicles in the military they fear these, that bus would get smoked by one.

3 Big Recoiless Rifle Mortar sized shell to the side of that will make sure everyone inside is turned to pink mist.

Of course all sorts of missiles, bombs, and other such military equipment can do the job but the items listed above would be the easiest to procure and become efficient at using