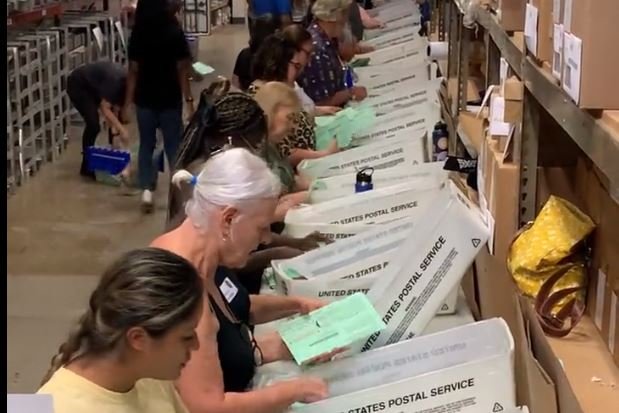 Voters in Maricopa County Now Reporting Their Votes Were Thrown Out and...

Something stinks. Bad. As The Gateway Pundit reported earlier — Maricopa County, Arizona, finally released another ballot count shortly after 7 pm on Wednesday and promised more results TOMORROW after 7 pm. This is outrageous. The polls closed...

I’ve had just about enough of this cheating bull shit

if they were going to commit fraud why would they announce their plan a week ahead of the primary?

if they were going to try to “throw away” votes why would they give people the ability to see whether or not their votes were counted? and then have it tell them that their vote was not counted? lol - they could have just had the app tell that guy “Yes” your vote was counted and he would never know any different.

If gateway pundit says so, it must be true.

How can it be that one group continually cheats and wins, and the other just can’t seem to stop it or prove it in a court of law?

Either the cheating isn’t happening or one side’s legal and strategic represetnation is incompetent.

A lot of us have had it with the cheating bullshit.

How can it be that one group continually cheats and wins, and the other just can’t seem to stop it or prove it in a court of law?

Because Democrat run originations are the ones investigating you fool

oh and if its true they didnt get the counting done yesterday that they were supposed to and didnt post the days results on time then that is a legitimate complaint, but it doesnt mean there is fraud.

The democrats have no candidates in a republican primary lol.

The Trump endorsed candidate is going to win, the one claiming there was cheating, so did she cheat to win?

People are getting dumber imo

Because Democrat run originations are the ones investigating you fool

Nobody is investigated anything lol

I was referring to the 2020 election genius

It is embarrassing that it takes these states multiple days to count ballots.

Florida optimized the efficiency of vote-counting after 2000 and it is a state with a larger population than PA/AZ combined yet they get results night-of.