So yesterday I finally did a PRS match. PRS is Precision Rifle Series, which basically means precision bolt or semi auto rifles at distances from 100 yards out to whatever. Its not just shooting off a bench rest trying to get bullseyes. You are shooting under stress, from awkward positions, engaging targets at various ranges.

The range is in a town called Graham, Alabama, just over the state line from Georgia. It is only about an hour and a half away which is a great distance.

The range is split into two sections, so two groups can shoot at the same time. Targets are at various elevations and distances, with some really challenging angles depending where you are shooting from. 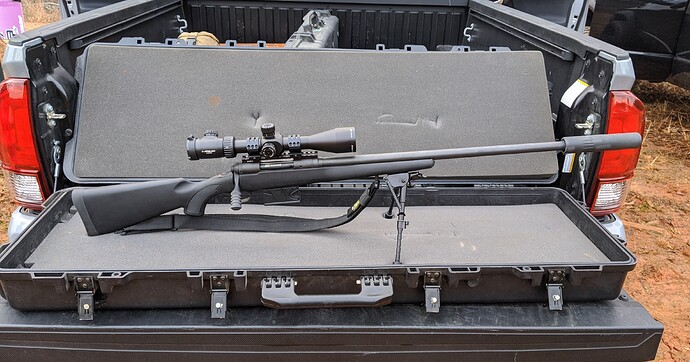 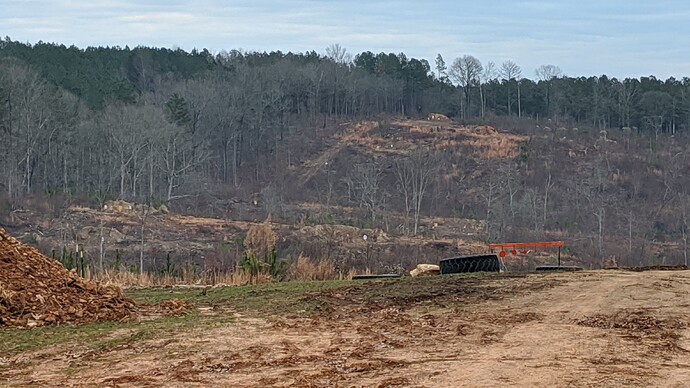 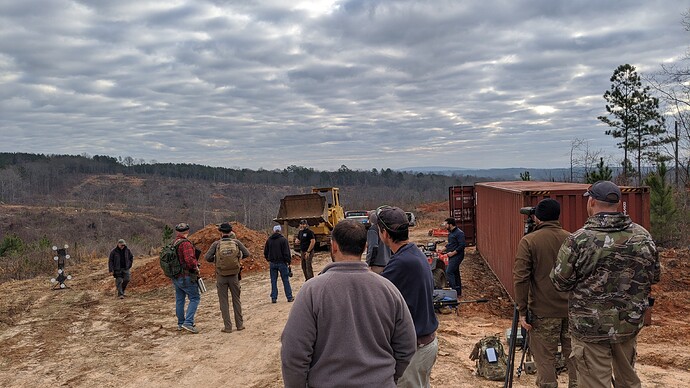 This was a two gun match so it was pistols and rifles. I will only really talk about the rifle portions of the stages since the pistol stuff to me wasnt all that great and didn't add anything to the match other than taking up more time and over complicating the stages for some people.

Stage 1: Engage 5 targets with pistols at 10 yards with rifles slung. Shoot through from the dashboard of the van THROUGH the passenger window. Two rounds per target at ranges of 210 Yards, 340, and 520.

I did great on this stage, hitting 4 out of 6 shots. I shoot rifles Lefty even though I am right handed due to vision problems with my right eye. I missed one shot at 340 and one at 520. This stage was easier for me to shoot than the others due to shooting left handed. I had good support for the angle and didn’t have issues acquiring the targets. 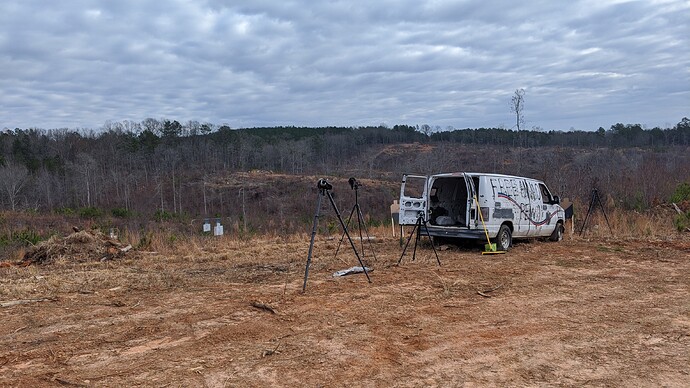 Stage 2 is where things started to fall apart for me.

You start with the rifle in the back of the van unloaded. You are in the drivers seat with pistol loaded and holstered. Engage 5 targets with pistol from the drivers seat, dump the pistol and go to the back of the van. There are three sets of targets, two rounds each. Set one you shoot from the port hole of the van, set two you should from rear window, set three you shoot from underneath rear door.

I smoked the 5 pistol targets, then went into the back of the van. Again, being lefty really helped with the angle. However my rifle started to malfunction. I fired the first round, racked the bolt, went to fire the second round and had a dead trigger. Noticed for some reason the firing pin did not engage the sear properly and did not cock. It took me three racks to get it to cock. I then went to pull the trigger on the target and for some reason the firing pin only partially dropped. I reracked and got a shot off but missed due to the stress of the situation. The range officer told me “Youre done with this stage”. I said “No, im not. There still time left.” I worked the problem and was able to get off one more shot that was a hit before time ran out.

I was disgusted and embarassed. Was about to toss my rifle down the hill.

I took it back and looked to see if there was any dirt or something, but couldnt find anything. I setup for stage three.

Sweet!! I need a range like that near me

Cool, thanks for posting.  Ive shot a few of these at steel city in Birmingham Al.  This range is closer to me so im gonna check it out.

I had the same problems as stage two, but towards the end of the stage I figured out how to get it to consistently shoot. If I racked the bolt slower and less forcefully, the sear would properly engage the bolt. I felt completely dejected and in all honesty, I was a little embarrassed by my attitude when I finished. I said “Im fucking done, fucking junk ass savage bullshit.”

I walked over to the truck and was fuming. I took off my rig and thought I was done. When I walked back over to the group, a few guys came up to me and said I can use their gear. These guys had multi thousand dollar rigs, and every one of them offered to let me use their gear. They were so nice, saying “work through it, figure it out, don’t give up” that kinda stuff. Their positive attitude was extremely annoying for a minute until I cooled off.

When we switched positions to the other end of the stage, I decided to give it another go with my gear. I said “Im going to fucking run it until it breaks”. This was a bit of a turning point in the match for me. 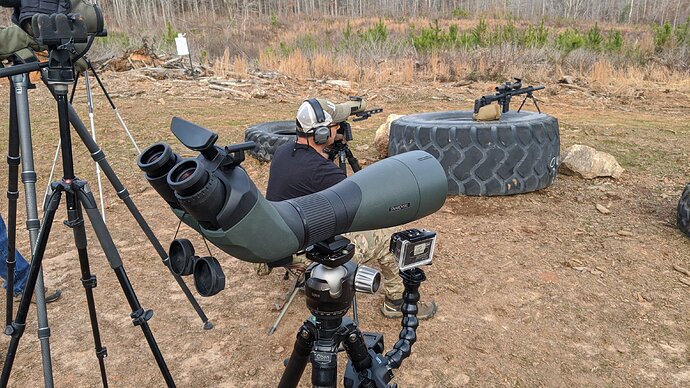 Cool, thanks for posting.  Ive shot a few of these at steel city in Birmingham Al.  This range is closer to me so im gonna check it out.

Stage 5 was a tough one for me, I ran out of time during it. Engage 5 targets at 200, 310, 340, 430, 607, two rounds each. Shooting lefty on this one was tough due to the way the shooting position was setup. You had to shoot off a tree stump but, shooting left handed didnt allow me to properly position my body. I only hit 4 rounds out of 10 on this one, ran out of time before I could engage the targets at 607. 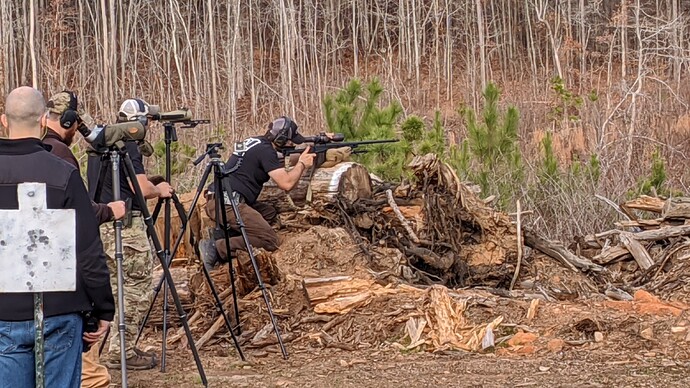 Intersting, thanks for posting

Stage 6 was a fun one for me that I did decently on. You shoot 5 targets from the top of a dirt pile. The shooting position was comfortable for me and the sand bag did great. The targets were tough, however. Even though the ranges werent that crazy, the changes in elevation were substantial. I only hot 4 out of 10 on this one, the pistol portion of the stage was after the rifle section where you had to shoot 8 4 inch steel targets on a spinner set. So two spinners of four targets. Once you shoot one the weight changes and the targets move. I knocked them all out in 8 shots except the last one, which took me 3 direct hits. For some reason it caught caught in the mechanism. 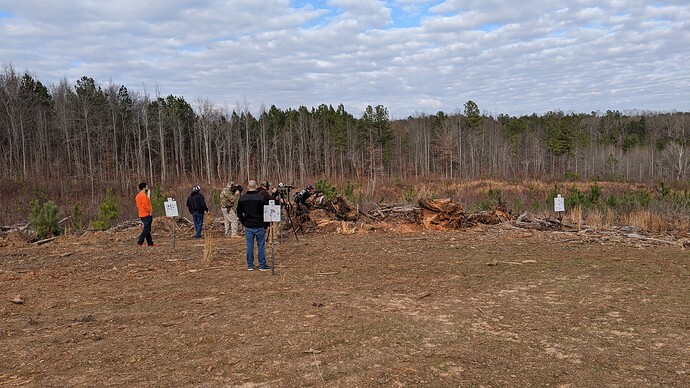 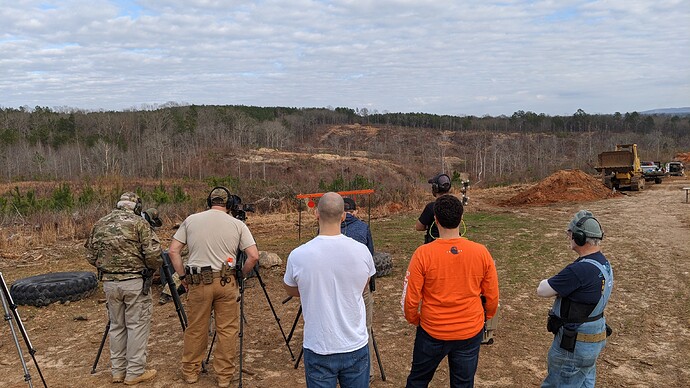