Do you agree with BJ Penn

Do you agree with BJ Penn’s statement of why Khabib never went up in weight? 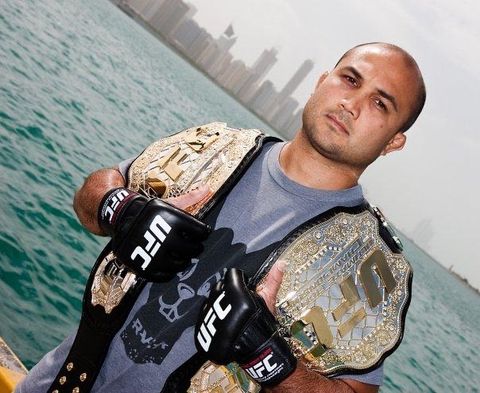 Of course, Khabib literally would almost kill himself to stay at 155. He pulled out multiple times and probably missed weight for his last fight. He would lose some of his advantage at 170 and never even took a one-off fun fight to test himself.

Also, many of his wins at 155 were against guys who have fought at 145. He rode his style and size advantage to a hyped undefeated record.

It’s not against the rules of course, but lacks budo.

Why does BJP keep talking about Khabib lol. Listen we all love BJ and hate Khabib but c’mon. Khabib beats any version of Penn

Id take this bet against you everyday.
Haaaackbib by murder in the first 2 rds

Who has Khabib beaten in two rounds that gives you this impression? Penn fought GSP to a split decision loss over three rounds. Penn would be all KN could handle in a three round fight. He might win a decision but no one at 155 is finishing Penn in his prime in 2 rounds.

BJ was always interested in taking tough fights where Khabib just wanted to stay in his division.

Because Khabib talked about him first.

BJ had a way more impressive career than Khabib.

I agree with everything except for the “oversized” thing. Everyone has weight cuts available to them and if it were just the weight cut that he was leveraging he wouldn’t have ended up undefeated. There are plenty of “oversized” fighters who don’t become champion and certainly that don’t go undefeated.

BJ will forever be the GOAT fighter. Fuck weight, fuck his own record, fuck belts. He defined the word fighter.

Guys like Khabib would have plenty of losses if they fought at their proper weight, Conor showed us that, unbeatable wrecking machine at 145, fights at his actual weight and he’s bang average. BJ cared about none of this, he just wanted to get in there and put on a show

It wasn’t the sole reason for his success of course, but definitely a factor, and one that is in stark contrast when talking about a guy like BJ

This is the best take, IMO. BJ wanted challenging fights and said to hell with his record. Khabib wanted to be a champion. I believe this can be summed up by Khabib retiring a little earlier than anyone expected and BJ still fighting a lot later than anyone wanted.

Regarding BJ’s post… don’t like. Part of the allure of Khabib is that he didn’t have to ever fight off his back. Yeah, BJ had great defense and showed great BJJ, but who gives a shit when you’re 16 and 14 and one of those losses was a submission?

BJ was a phenomenal fighter but is remembered more for his attitude and willingness to fight anywhere, anytime. Khabib is remembered for dominance.

BJ is refusing to see the reality that Khabib was a far more dominant lightweight than BJ, even though BJ was great and fought at other weights.

He won two more fights than he lost. Stop it

BJ still has fresh excuses at the ready…

The only Khabib fight I was really excited for was vs Conor. And I’d say Conor was 80% the reason. In fact, Khabib has Conor to thank for most of his popularity late in his career.

BJ was in so many exciting fights I’ve lost count. And some where I was left speechless, for example his first fight vs Hughes. Love or hate BJ, you can’t deny he was a fighter’s fighter and would fight anyone at any weight class just to face the challenge. That’s not something anyone could ever say about Khabib. I’ll leave it at that.

Khabob beat Al Iaquinta for the belt, 2 featherweights and Justin Gatche and then tried to ride of into the sunset as the “GOAT”

I agree with everything except for the “oversized” thing. Everyone has weight cuts available to them and if it were just the weight cut that he was leveraging he wouldn’t have ended up undefeated. There are plenty of “oversized” fighters who don’t become champion and certainly that don’t go undefeated.

Khabib however has made a career off overpowering and bullying smaller opponents in 1 specific weight class. So I can’t put him on the same level as legends like BJ, Conor, Aldo, etc. who have had legendary success at 3+ weight classes.

Everybody worries about Khabib’s legacy except for Khabib.

“Baah my golden years were better than xxxxx!”

Except he is… He’s running his mouth like he’s still in the division.