Does anyone cool ride motorcycles?

The Harley subpopulation also tends to be a hit or miss.

TBH a lot of it is miss, and Harley fucked up for a good decade+ being stubborn and listening to their worst supporters.

Harley trying to cater to their shrinking, aging core of customers caused them to miss out on appealing to Gen Z/Millennials, killed their sales in the 2010s, and made it that much harder to shake the brand stigma they have.

They did end up realizing this, but now are playing catch-up in a lot of ways.

So much potential with the brand itself beyond just bikes. Harley should follow the blueprint Schott (the moto jacket company) used to stay relevant as times change.

Is that how he died? For some reason I thought it was gang violence

Haaaa gotcha! There is no secret handshake

Is that how he died? For some reason I thought it was gang violence

I think he tried to steal a motorbike and ended up dead.

I ride sportbikes with a core group of longtime friends (or alone) generally. Tried doing the ‘bike night’ meets and rides and etc, and way more tools than people I’d actually want to ride with or be around. No idea if the cruiser community is like that as well, but I see way more well put together group rides from them. 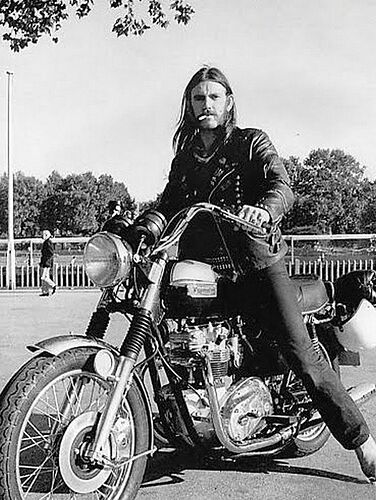 I used to own two HD’s. First one some soccer mom in a mini van almost ran me over, I went down hard at a lower speed. My half helmet bounced off the pavement twice. I upgraded to a Softail Slim S and a semi blew a red light as I was taking a right. Luckily, I was paying attention to how fast he was going or the good Capt’n would have been no more. After that I refused to get on the bike ever again after getting home and sold it.

Got a Ryker now. I don’t like it. It is far faster than a Harley, but slower than a sportbike and you’ll never fit in with either crowd.

The thing that rubbed me the wrong way about the Harley is that when i’d be wearing a generic leather cut MC guys would ask who I ride with in kinda a snobby way. I explained to them that I only ride with a friend and primarily use the vest to carry my ccw and other belongings, and that it has a spine protector in it. People are killed here weekly. Unless I had an MC to ride with or a group of friends I probably wouldn’t get another motorcycle. Ryker is up for sale. 1600 original miles, upgrades, etc. Custom wrap. I just don’t trust the drivers here

Per MC rules, 12 month minimum before I can hold an office position.

Hespect.
I dig it.

Was getting the itch to build a custom bike on this frame:

Was quoted $36 k out the door. There were a few different engine options.

Jason mamoa is in an indigenous club. Seems like a cool dude

Jason mamoa is in an indigenous club. Seems like a cool dude

I prefer him on his youtube videos yapping about bikes.
Seems like someone I could hang out with.

The promo video for the Pan America is pretty good.

He’s sponsored by Harley too, right?

You need much more than a pretty good promo to sell that bike. One of the ugliest and in terms of performance, doesn’t nearly match most of its competitors.