Does the UFC Need to Start Enforcing its Code of Conduct? 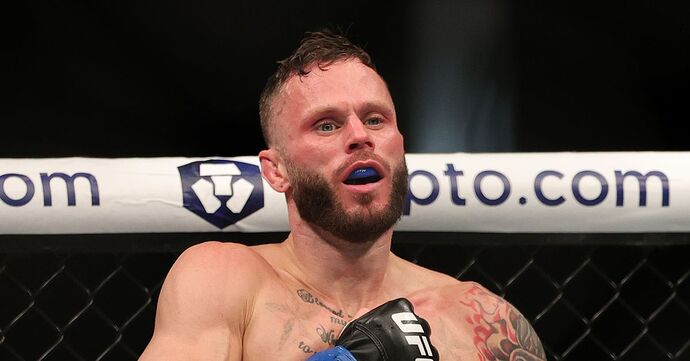 Roundtable: Does the UFC need to start enforcing its Code of Conduct?

MMA has always been known for being a world where anything goes, and as far as the UFC is concerned, that also applies to what comes out of fighters’ mouths. But is it time for that policy to change?

MMA has always been known for being a world where anything goes, and as far as the UFC is concerned, that also applies to what comes out of fighters’ mouths.

But is it time for that policy to change?

On Saturday, Andrea Lee coach and cornerman Tony Kelley drew criticism from media, fans, and fighters , when he made offensive comments about Lee’s opponent Viviane Araujo between rounds. Speaking to Lee, Kelley let her know that he felt Araujo was cheating, saying, “That’s what they’re gonna do. They’re dirty f****** Brazilians. They’re going to f****** cheat like that.”*

Kelley made no apology for his comments, later writing on social media that the response was a result of “cancel culture” and it remains to be seen if the UFC will publicly admonish Kelley, who is also contracted fighter.

Technically, the UFC does have a Code of Conduct policy in place that is meant to address when fighters don’t “act in a legal, ethical, and responsible manner” or if they engage in “conduct detrimental to the integrity of the UFC organization.” But since the announcement of that policy in 2013, there have been few instances where it has been enforced even as high-profile fighters like Conor McGregor , Jon Jones , and Colby Covington have crossed the line, legally or otherwise.
Lee: I wish we were gathering under cheerier circumstances, but we once again find ourselves having to review some awful fighter behavior and whether or not something should — or will — be done about it. Steven, you’re the smartest guy I know, to what extent do you think the UFC could punish Kelley for his comments if they were so inclined?

Marrocco: The UFC has cited its code of conduct in cases where fighters have been punished for using anti-gay slurs, transphobic language, and jokes about rape, so xenophobic and/or racist language is very much in bounds for some sort of sanction. In this case, you had a licensed cornerman using the language, so in theory, the commission could also bring a sanction against Kelley for conduct that reflects a discredit to unarmed combat.
The promotion has a wide latitude when it comes to acting upon its fighters, and whatever it lacks in legal authority to punish, it makes up for with the contracts it binds them to. If the UFC wanted to force contrition, it could simply withhold fights for a certain period or even release Kelley from contract, because that’s the benefit of a one-sided deal. Kelley might be able to take them to court if he so objected, though it would cost a ton in time and resources.

That being said, the key part of your question is “if they were so inclined.” When you have “700 lunatics” under contract, there’s only so much you can do to police behavior outside of the cage, according to UFC President Dana White. Fighters say mean things — just make sure they show up with a mouthguard and cup and we’ll take care of the rest. The gap between what they could do and what they’re willing to do continues to grow.

Meshew: Is it, though? Has the UFC ever been willing to discipline fighters for anything? When Conor McGregor threw a dolly through a bus and legitimately injured several fighters under roster, all they did was wring their hands and then use it to promote a fight with Khabib Nurmagomedov. After that fight, when Khabib jumped the cage to attack Dillon Danis and incited a post-fight brawl, the extent of his punishment was to not have the belt put on him by White (the commissions issued some suspensions, not the UFC). And when, months later, McGregor and Nurmagomedov got into a heated argument online where McGregor made aggressively bigoted comments about Khabib’s wife and it looked like we were on the verge of legitimate death threats, Dana basically told them to cut it out, and went back to driving.

In fact, the only time I can remember the UFC doing anything with regard to their Code of Conduct is when they stripped Jon Jones of the light heavyweight title after he got into a hit-and-run accident with a pregnant woman and it looked like he may be facing some actual jail time. But for all their arrests and legal troubles, neither Jones nor McGregor has faced any actual reprimand from the UFC in terms of a fine or a forced apology.

Lee: Let’s not forget as soon as Jones was in the clear from that 2015 incident, he was immediately placed into an interim title fight against Ovince Saint Preux (and then after a failed drug test cost him that interim title, his next fight was another title fight for the undisputed championship against Daniel Cormier).

Meshew: Exactly. Punishing fighters for non-fight activity is simply not who the UFC is, and given that we are in year four of the promotion falling under the Mickey Mouse banner and no substantive changes have been made, I suspect we’re never getting any.

Marrocco: And, just spitballing here, but doesn’t a Code of Conduct further undercut the argument that these folks are independent contractors? I mean, the more you tell them what they can and can’t do and can and can’t say, aren’t you treating them more like employees?

Lee: That’s a whole other can of worms and fine example of how the UFC’s double talk when it comes to fighter employment status always seems to benefit the UFC more than anyone.

Another reason why the UFC is so lenient in these situations, especially when it comes to those massively popular names that you mentioned like McGregor, Nurmagomedov, and Jones, is that it doesn’t feel like the fans — how to put this delicately — care?

Assuming I’m not overselling the level of fan apathy here, is it fair to say that the public reaction or lack thereof is also responsible for the Code of Conduct essentially being theoretical at this point? On another level, do you believe there’s any point where the corporate higher-ups will see fit to step in and provide any sort of guidance as to how the UFC handles these situations or should they be content to let White and company take care of business as they have been for years?

Marrocco: Well, “Mr. Rules Rule,” I would wager that it’s just like any new set of guidelines in that they’re only as good as how much they have a meaningful impact on the thing they aim to affect and, more importantly, whether they’re actually enforced. When the UFC first trotted out the full Code of Conduct, it was in response to Matt Mitrione’s ill-advised rant about Fallon Fox in 2013. Then it was used in other foot-in-mouth situations like Nate Diaz’s anti-gay tweet and Miguel Torres’ Always Sunny in Philadelphia rip. That was a different time in the UFC’s history. The promotion was still finding its mainstream footing, and it was extremely responsive to this kind of thing. They cared about how things looked to the public, even if that public was the MMA bubble.

As you’ve both pointed out, they started ignoring their own rules when it came to company stars, and fans and reporters pretty quickly figured out that there were a different set of them for the moneymakers. The same could be argued for the UFC’s anti-doping program, where people like Jones seemed to get a lot more leeway than Amanda Ribas when it came to how their cases were handled. In the end, all of this stuff wound up looking more political than anything else, which would be fine if they hadn’t sold themselves as a sport for over a decade. The contradiction and double standard was the problem.

There are certain things that the promotion will put its foot down on in the Mickey Mouse age. For reasons that haven’t been made explicitly clear, fighters are no longer allowed one of the most basic forms of free expression in displaying their national flag in the octagon. So someone up there in corporate has decided that the UFC isn’t totally a place for free speech/expression, no matter what Dana might say. Whether that’s because it’s a bad look to align with certain countries or because a certain flag pissed off a broadcast partner somewhere, we’ve found a new line. The difference between now and then is there is far less transparency about the whole process, and so we’re left to make assumptions about the UFC and its broadcast partner cares and doesn’t care about, and that’s not always the most fun place to be.

Meshew: Disagree wholeheartedly. I have an enormous amount of fun making assumptions, because, especially in this instance, they’re less “assumptions” and more “clear and obvious guiding principles.” As the old adage goes, actions speak louder than words, and the UFC’s repeated lack of concern when their fighters spew casual bigotry tells us all we need to know. Extrapolating that out, the UFC does not care because they care about the almighty dollar, and fans have not seemed to mind the increasing number of outside-the-cage incidents that have happened.

And again, we’re not that far removed from the days of White making reprehensible comments about Cris Cyborg and Loretta Hunt. These sorts of things are simply baked into the cake.

Lee: Last thing I think we should touch upon here is whether there’s any chance that the Code of Conduct sees a revision anytime soon or at least increased attention from the UFC. If you Google “UFC Code of Conduct,” it doesn’t take you to any official website. There is no section of UFC.com that takes you to the policy, so while everyone seems to agree that it exists, it’s clearly not something that the company is concerned about people being aware of (it was most recently officially cited in an April 2015 statement regarding the aforementioned Jones hit and run). It’s entirely possible that there have been internal changes to the policy’s usage and language and we just haven’t been told.

With the UFC machine chugging along and churning out 40-plus events a year featuring hundreds of fighters on the roster and passing through it, is it time for them to dust off the ol’ CoC and punch it up given that the current product is in many ways completely different than it was nine years ago?

Meshew: While Dana White is president, I highly doubt it. I was one of the people who thought that Mickey Mouse might finally whip the UFC into a real professional company, and perhaps they have internally, but it has not extended to the contractors, and Disney has not seemed to care a lick, and WME is so dependent on the UFC as a profit machine that anything short of outright Naziism is probably going to be waved aside.

And here’s the unfortunate truth: both parties are right. The UFC doesn’t need a Code of Conduct. They can simply continue to do what an enormous number of people do every day when they are confronted with something that obviously is bad but doesn’t tangibly affect them: they say “thoughts and prayers” and immediately forget about it.

If that’s an effective way to move past mass shootings, global warming and the looming promise of the Earth turning into a barren hellscape, and an attempted honest-to-God insurrection of the American government, it will certainly work to forget about a cage fighter saying a bigoted thing while cornering during a Fight Night that not too many people are likely to remember a month from now.