HOUSTON — Two people were shot to death and 20 wounded late Saturday at what the sheriff called a “birthday party gone wild” that drew a crowd after it was advertised on social media.

“Social media I believe caused part of the problem in this situation, and social media may be able to help,” Garcia said at a briefing outside the house Sunday.

An 18-year-old boy shot in the head in the street outside the party died at the scene, while a 16-year-old girl shot inside the party house died at  a hospital, Garcia said. Both were students at nearby Cypress Springs High School, he said. The sheriff did not release their names.

One of the injured was in critical condition, Garcia said.

Garcia described the two suspects as men ages 22 and 17.

He said the girl who threw the 18th birthday party had advertised it on social media, drawing a crowd of more than 100 that could not fit in the house.

“Any time you promote a party on social media, you have no control over who comes to your door,” Garcia said.

The girl’s mother was home during the party, Garcia said. Investigators found no sign of narcotics or an “inordinate amount” of alcohol, he said, and no one had been charged in connection with the party.

He said the hosts had a bouncer who was checking guests for firearms. The suspects refused to be patted down, left and then likely returned through the backyard, which faces a bayou, investigators said.

Once inside the house, Garcia said, one suspect fired his gun into the air “in apparent appreciation of music” and then the second fired into the crowd. It was not clear which fired first. One victim was standing near the DJ, another near the front door, Garcia said.

In the mad rush that ensued, partygoers tried to jump out windows in the two-story brick house and force their way out through a garage door, Garcia said.

The girl who threw the party, Mariah Boulden, said she posted her name and address on Facebook,Instagram and Twitter, but only invited friends. She figured her brother acting as bouncer was enough security -- until the suspects showed up with some other, older strangers.

“They was too old to be in here. This was a high school party,” Boulden said as she stood in front of the house Sunday, adding that “they knew they wasn’t supposed to bring guns inside.”

Boulden said she was about to shut down the party because of the uninvited older guests when the shooting started.

One of her relatives, B. Tucker, said she had to help a girl who was shot in the back.

“There’s blood everywhere and bullet holes in the wall,” Tucker said. “This is exactly what we didn’t want to happen.”

Firefighters came to wash bloodstains from the street Sunday, but some remained. 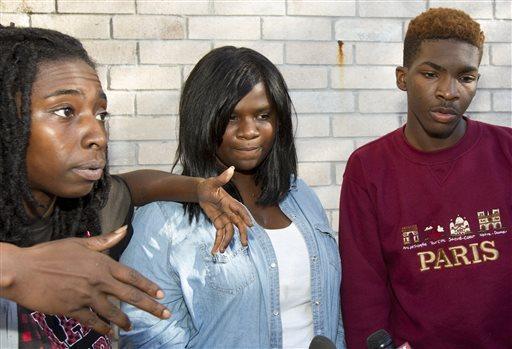 Shaniqua Brown, 17, a junior at Cypress Springs High School, stood nearby as they worked. She said she came to the party with her younger siblings, 16-year-old twins, that they were invited by Boulden and saw her mom there. They were having fun dancing until the strangers arrived and started shooting, she said.

Brown hit the ground. “Soon as I looked up, people started stepping on me” as they fled the house, she said.

Brown watched youths run screaming from the house, bang on neighbors' doors and beg them to call 911. When Brown ran out, she heard more shooting outside and ran back in the house. There, she saw young people trying to flee through the garage, breaking the door.

“They were lifting it up, trying to get away,” Brown said. Neither Brown nor her siblings were hurt.

Neighbors came to their doors and watched youths flee, running across grassy lawns and under trees, trying to hide between neighboring homes, behind cars and in the beds of pickup trucks.

Joe White, 39, was staying a few doors down, and said when he came to his front door he saw a wounded young man trying to hide nearby. The youth, in jeans and a blue sweat shirt, ran into the street only to get shot again.

“They got him again over there,” White said, pointing from his driveway into the street, where he said the youth fell, his body twisted. By then, neighbors had emerged from nearby houses.

“We watched him take his last breath,” White said.

“After you have your party, put it on social media — not before,” said White.

Mary Woods heard about the shooting and rushed to pick up her children -- Brown and the twins.

“My heart just goes out to the families of those children,” Woods said.

“Any time one kid is injured, it’s a tragedy,” he said, let alone a large group.

Mark Henry, superintendent of Cypress-Fairbanks Independent School District, posted a statement on the district Web page noting that on Monday, “the district crisis management team, counselors and additional security will  be on identified campuses to assist staff and students. Our thoughts and prayers are with the families that have been impacted by this tragedy.”

Boulden and her friends apologized and said they planned to hold a vigil outside her house Monday night for those killed.

Boulden’s advice?: “Don’t have a house party. Stay at home, because it ain’t worth it.”

Shaniqua Brown is the blackest name ever, lol.

Sucks that these kids got shot up, it's good advice not to advertise parties on FB.

Isn't that Trayyvon Martins fatass friend in the middle?

Word of mouth carries just as fast as social media imo, but yeah i wouldn't put that kind of thing on twitter.

These people were obviously looking to go shoot a place up though.

Do 18th Birthday parties really need a bouncer patting down for guns? I guess some do.

That had to be some pretty amazing music.

Will the parent(s) be arrested for having a party with underage alcohol, then be sued for negligence?

The party was bangin'

clarenceworley - Will the parent(s) be arrested for having a party with underage alcohol, then be sued for negligence?

The shooter was white...

nevermind the title of the article would have been different then.

The shooter was white...

nevermind the title of the article would have been different then.

Social media I believe caused part of the problem in this situation...

NO dumbass cop, social media had nothing to do with the murders

Parents trying to be their kid's friend instead of a parent is a lot of what happened here. Drunk teenager falls down the stairs at a party = lawsuit in which the court is going to have no sympathy for an adult letting kids drink. Let alone being OK with that many people showing up. Or being OK with a party that needs a "bouncer." Or not knowing or caring what your kid is doing online.

Social media I believe caused part of the problem in this situation...

NO dumbass cop, social media had nothing to do with the murders

Yeah those Guys were looking for trouble