Dr Martens up for sale 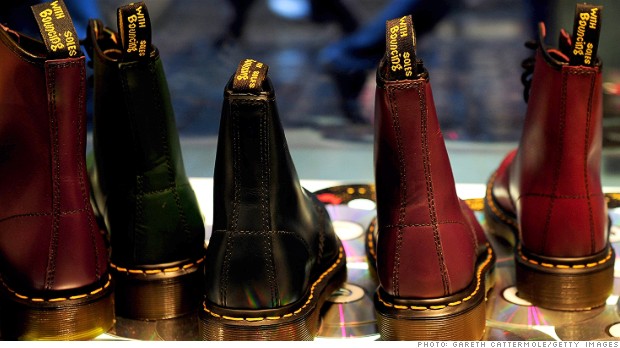 Dr Martens could be bought by private equity firm Permira within weeks.

Sources familiar with the situation say the Griggs family is in talks to sell its 91.5% stake in the company to private equity firm Permira for £300 million ($486 million).

The remainder is owned by the management team. The purchase could go through in the next few weeks, the sources said.
Dr Martens and Permira declined to comment on the deal.
Dr Martens leather, lace up boots have been a signal of youth rebellion since they were first produced in 1960. Waves of subcultures -- from skinheads to punks and gothic followers -- have embraced the footwear.

Rock stars have also helped pump the brand, starting with The Who guitarist Pete Townshend and continuing with celebrities such as Rihanna and Miley Cyrus.

It's the second time in as many years the Griggs family has appeared close to selling its stake.

Private equity and trade buyers have been circling the firm for years. Talks between private equity firm Electra Partners broke down last year after Dr Martens was unsatisfied with the price tag put on the company, which saw pre-tax profit triple to £15.3 million in 2012.

Dr Martens are sold in 63 countries around the world, with the U.S. accounting for half of total sales.

Most of boots are now produced in Asia, with a small selection still made in their native England.

Made for, waffle makin', kickin' in the shin.

I used to wear them. Now I wear Daytons, hand made in East Vancouver.

mrSLIM - Made for, waffle makin', kickin' in the shin.

Love my Docs. I can't see new ownership changing things much, not even the name, it would be retarded to do so,like trying to fix something that's already perfect!

It's pretty amazing that a company that is so closely associated with racists (not by their own doing) has been so successful with other demographics. Never owned them as boots are not my thing, but they look cool.

Best boots I've had, Bought a pair when my daughters were 6 months old and I still have em.
(they will be 12 in december.)

I haven't seen anyone wear Doc's in years here in Los Angeles.

I haven't worn a pair in years. This thread is making me nostalgic for a pair though.

Fucking love them, and hope this doesn't hurt the brand toooo much.

I've never liked any of their shoes. I always associated their shoes with skinheads, goths and fags.

Wow, I just realized that I've been wearing them 20 years as well.

You're getting old, yet you've not managed to accumulate any green arrows in that time?

quality - I've never liked any of their shoes. I always associated their shoes with skinheads, goths and fags.