Dude tries to pick up a small shark 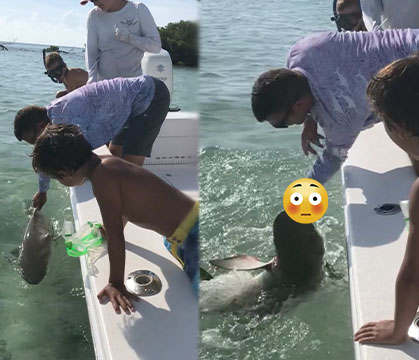 Play Stupid Games, Win Stupid Prizes: Dude Gets His Pinkie Ripped Off By A...

Two in the pink, none in the stink.

Dont fuck around with a shark homeboy.

He said that sounding pretty matter of fact and macho right there but I promise you he was not gonna sound so matter of fact in a minute or two. Not smart.

Reminded me of the guy who got his finger ripped off by the orangutan video that someone posted a few weeks ago.

Thats because you didn’t get to hear what he sounded like a couple minutes later once the pain hit him.

The pain seems marginal compared to the mental anguish of losing a digit.

“The Yakuza HATE him!”

Lol those poor kids man. Seeing that stupid shit has to be a little bit traumatizing to them. Hope he doesn’t play guitar.

It’s only a pinky…

Give the guy a break…that thread title said dolphin, not shark.

I saw my brother get his finger bitten off by a dog when I was a kid. I turned out fine. Except I’m retarded.