FWAT but if you want to: I dont know what point she was truing to prove other than she could commit a crime. Story:

Last week, Casey Garcia walked straight into an El Paso middle school. She later greeted the principal and faculty, ate lunch in the cafeteria without a mask and made it almost all the way to the last class period.

Only then, Garcia said in a video, did a teacher notice she was not actually a student — she was the 30-year-old mother of one of the seventh-graders.

Garcia was arrested on Friday after social media posts she made about the incident went viral. She was charged with criminal trespass and tampering with government records, jail records show.

But the Texas mother insisted she wasn’t seeking to break the law or gain online notoriety — instead, she said, her “social experiment” was meant to show the lack of safety protocols at schools and to illustrate how vulnerable students are to threats, especially mass shootings.

“We need better security at our schools,” Garcia said in a video. “This is what I tried to prove. I don’t mean to be curt, but I kind of feel like I proved it.”

She added: “There have been way too many mass shootings. The first one should have never happened. We need metal detectors. I don’t think backpacks are a good idea.”

“While there was a breach in security by an individual associated as a parent with the school … we want to assure you that our security measures are being reviewed and evaluated,” Meza-Chavez said in an email.

Since the Columbine High School massacre in 1999, more than 248,000 children at 260 schools have experienced gun violence, according to data compiled by The Post.

The terrible numbers that grow with each mass shooting

Garcia said that threat of violence motivated her to see if she could sneak into her daughter’s school, which she didn’t identify by name.

The day before her “social experiment,” the resident of San Elizario, Tex., a city near El Paso bordering the Rio Grande, dyed her hair and tanned her skin to more closely resemble her daughter, she said.

Then, on Tuesday, Garcia began recording outside her daughter’s school.

“I’ll talk to you once I’m inside,” said Garcia, sporting a yellow hoodie, jeans, sneakers, glasses and a black face mask. “Do I look like a seventh-grader? No? Cool. Awesome.” (Garcia is 4 feet 11 inches tall and weighs 105 pounds, jail records show.)

Once inside, Garcia said, she wrote down her daughter’s school ID number and was granted full access to the public school. Video shows Garcia greeting a man she identifies as the principal and other faculty as she walks down the hallways trying to find her way to her first class. In between, an adult complimented her backpack and another person showed her the way to the library.

“I am going to get so caught,” Garcia told the camera. “I’m actually really scared now.”

But as the day went on, Garcia appeared to go unnoticed. She attended a math class, and went to physical education, where the coach asked her to identify herself, she recounted in the video.

“I’ve been here all day, face-to face with teachers,” Garcia whispered as she ate lunch. By then, she had made it through more than half of the day without getting caught, she said.

It wasn’t until the last period when a teacher who asked her to stay after class recognized that she was not the seventh-grader she claimed to be, Garcia said.

“Well, I finally got caught,” Garcia told the camera as she pulled down her face mask. “I told them that I would go to the principal’s office, so I guess we are going to see what happens.”

More than 248,000 students have experienced gun violence at school since Columbine

Later on Tuesday, the San Elizario Independent School District notified the El Paso County Sheriff’s Office about the incident, Leslie Antunez, a spokeswoman with the sheriff’s office told The Post in an email.

Sheriff’s deputies arrested Garcia at her home on Friday, citing an outstanding traffic warrant, video recorded by Garcia showed. She was booked into the El Paso County Detention Facility.

Garcia was released later that day after posting a $7,908 bond, an officer at the detention facility told The Post. Garcia did not immediately respond to a message from The Post late on Sunday. It is unclear whether she has an attorney.

In a video posted to YouTube on Thursday, Garcia said she understood why some might consider her actions “weird,” but claimed students would now be safer after she exposed a lack of security.

“Are you more concerned that I, a parent, was sitting next to your child or do we really want to wait for the next person taking their second amendment right to the extreme?” Garcia asked, later claiming she “exposed the dangers of our schools. I’m trying to protect my children and yours.”

Because that is how school shooters get in… they pretend to be students all day.

She’s tiny, and she dressed up like her daughter on purpose (who she presumably resembles) 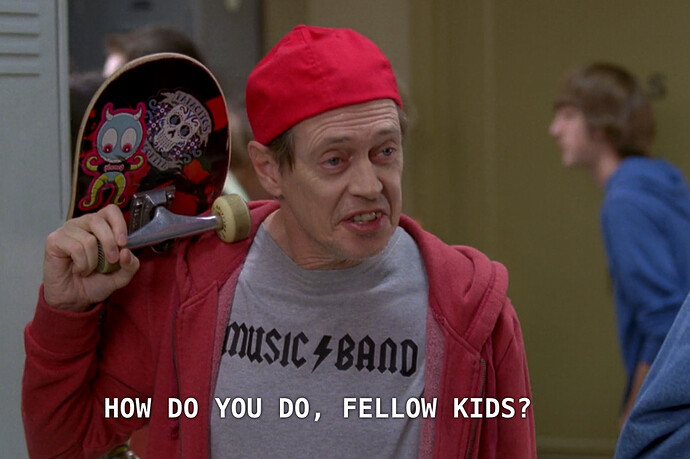 She became a mother at 17… let’s not pretend she’s a genius.

Seriously. What an amazing hole in security she exposed. 5’ 100lbs women with face masks and hoodies can sit in class for a while without being noticed. Bah gawd the security issues this poses.

I’ve walked right into middle and high schools as myself without being stopped too. I mean I went to the admin office and checked in but it isn’t like anyone was even giving me a stink eye before I got there. Even asked for directions.

Chris Hanson better stay out of my way this time.

Lol @ criminal trespass and tampering with a governmental record. Those will never hold up.