Dummy Tries To Attack Guy! Gets Shot! Screams And Cries Like A Little Girl!

I take my pants off to fight.

In fact, I take off all my clothes before I fight.

Mostly because no guy wants to be seen rolling around with another naked guy.

In fact, if you are about to fight 2 guys and you get your clothes off quickly enough you can make it look like they are fighting over you!

@InCogneeto
last try, then I’m out of this thread:
Tell us what the shooter should have done differently, please.
I think he reacted very well, making it absolutely clear he wasn’t taking shit from a psycho while giving him plenty of space to back down. He even did try to avoid a headshot.

100% this. Super dead is usually accompanied by paralysis. If he’s mostly dead, then all bets are off. 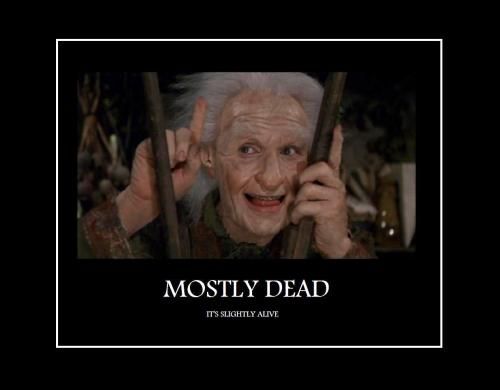 Deescalate. Pulling out a gun only creates more tension.

A gun is a great deescalator.
Who in his right mind would keep on attacking after someone brandishes a firearm with a defensive attitude (not shooting but standing his ground)?
This is what I meant when saying you have everything backwards. It’s kind of normal, the media have put so much garbage into people’s minds for decades that the simplest thruths are seen as wrong.

Who in his right mind would keep on attacking after someone brandishes a firearm with a defensive attitude (not shooting but standing his ground)?

Someone who believed there was no way that the other person would shoot. Unfortunately for him, t-shit man bet his life and he lost.

Does bring up one thing for discussion, though. I always have it in my head that if I draw then it is because the shoot/don’t shoot decision was already made half a second ago. And that I don’t want anyone to know I’m carrying until they hear my gun go BANG.

I am not a social worker nor your therapist. It is not my job to deescalate you. If I say “STOP! Do not come any closer!” then that’s all the warning I intend to give.

I am not a social worker nor your therapist. It is not my job to deescalate you. If I say “STOP! Do not come any closer!” then that’s all the warning I intend to give.

Guy seems to have come down with a case of the “Fuck around and find out” virus.

Whats preventable? Why would you risk going hand to hand with a attacker? You dont know what weapons he has stashed ob him or how well hes trained. Guy gave him more than enough opportunities to leave and the attacker contined his attack.

A gun is a great deescalator.

Not always. Often times, it can heighten tensions. Just look at the father who got shot and killed for being on a guy’s porch or the two rednecks shooting to death a man in front of his wife. Etc, etc.

Of course it can. Everything can escalate. Putting your hands up, down, in your nose or into fighting stance can all escalate, depending on the aggressor’s mind.
The point is that it is your right, if you are legitimately threatened, to put up a defensive perimeter that is capable of dealing with the situation.
You are not required to deescalate, run away or similar nonsense.

Some states do already have these aweful self defense laws where you basically have to run out of your house in order to not harm an intruder.

have a gun out

He can get it out and point it to prevent the unprovoked assault against himself that he doesn’t want to participate in. If after that, the person doesn’t back off and comes forward toward the gun, the options are either shoot or get into a wrestling match over a gun, which puts any normal person in fear of GBH or death, which is the standard for self defense, so shooting is permissible when he comes towards the gun.

If it remained holstered the entire time, then he couldn’t have shot him.

If he pulled it from the holster, then at that point the situation is the same as in the video, except he pulled it at a different point in time, but after that it is the same.

LOL @ a judge is going to ask you. Man knows absolutely nothing about how anything works in court.

You think a judge can’t ask a witness some questions? Yes they can, you dumb fucking peanut!!!

A judge can’t insert himself in the questioning like you suggested. Would be instant grounds for mistrial/appeal imo. Your question puts the judge in the role of advocate.

They do actually have that option but it is so rarely done it is barely worth talking about. Mostly done in Family Law and such. Almost never happens in a criminal case other than some clarifying questions.

Incogneeto’s idiotic argument is that if a violent person chooses to aggress upon a peaceful person, the peaceful person is now obligated to engage in physical violence with his attacker.

This is a psychotic line of thinking that is not conducive to maintaining a functioning society.

I think NY argues along that line of thinking. Even against a house invasion you have to make sure you don’t use unnecessary force. Effectively you have to run away from an aggressive intruder. it’s either that or prison.

Whats preventable? Why would you risk going hand to hand with a attacker? Y