Glad they're back at Dailys Place, crowd of distanced Dark talent, excellent.

I called this group plus Hangman being the new Horsemen with Tully way back, since Hangmsn has taken off, wonder who the 4th could be if not Hangman, would need to be Spears partner it would seem...

Haha Matt with a wardrobe change

Hager doing a lot of the heavy lifting in the late spots. Breaking falls of the guys coming down from high altitude.

Pretty good show. Jake using the snake on Brandi was epic and really set up the PPV well.

Main Event was a fun watch. They had it all scouted well so the spots were cool. Not just hitting each other with shit.

Looked like Sammy got clobbered by the cart, main event was a blast, great to have MJF back, Brody Lee my favorite shit going, Hardy finally in an actual match and back in the groove, great show, excited for ppv

Sammy is a selling machine.  He took that golf cart shot like a champ

They've been doing some good stuff lately.   Cody is working his ass off and helping really feature the guys he's working with.  Even if he's going over in the matches, he's doing it in a productive way by keeping his opponents strong.

If they're smart, they'd push the fuck out of some of these younger guys like Darby Allen, MJF, Lucha Bros, and Sammy Guevara.  The booking of the "never be able to challenge for the title again" for Cody was a pretty good idea, because he can still win most of his matches, still kick ass, but still also allow the others to hold the belt while he remains over with the fans simply based on his work and good matches.

Cody's really looked good in this formula lately, because he's by far the best ace they have in terms of baby faces and he's winning and losing in the right amounts.  I like the Darby Allen rivalry.   Book this old school and have Darby chase Cody a few times and then have him win when it actually matters.

The vignettes they are doing are great and add quite a bit. It’s so much more than BTE. Britt Baker has been doing really well while Sammy and Darby are crushing it with their Vlogs. Then you cap it off with Jericho, Jake and Hardy and it’s just fantastic.

The vignettes they are doing are great and add quite a bit. It’s so much more than BTE. Britt Baker has been doing really well while Sammy and Darby are crushing it with their Vlogs. Then you cap it off with Jericho, Jake and Hardy and it’s just fantastic.

Jericho deserves a ton of credit as well for his tireless work in putting over the product and the younger performers.   Whether he's winning, losing, performing as champion, doing commentary...he's been a leader and a swiss army knife for the company.

I've shit on AEW from time to time, but there are aspects like the aforementioned where they really seem to have their heads on straight and their hearts in the right places.

The biggest thing that they need to be careful about is making sure that they resist the temptation to go on free-agent shopping sprees and bring on cast offs from WWE to become their top performers.

great show tonight. glad to see pineapple pete getting a shot next week

I think  Tony said it about Pineapple Pete. Dude was a nobody a month ago and now he's gonna be full babyface against the top heel next week. Imagine the pop he'd get if there was a live  crowd.

Sometimes AEW is a little too campy, but it keeps my interest every week, and they do a great job putting over new talent.

The above is Sammy’s latest. A tag match with Ricky Starks vs. a mop and a broom.

Starks got legit burned on the flaming table spot.

It still pisses me off jericho isnt champ. I dont understand why. He is doing way more for the company than mox. Originally figured it was cause of fozzy commitments they removed the belts but jericho is still here!

Also as much as I like things about aew, its more similar to wwe than people seem to acknowledge. Its not the sports product I had hoped it would be so my patience runs out alot with it. Only person who has gotten more over with me is jericho, lucha bros, and cassidy. I feel like I'm fine keeping tabs on the product and only tunning in periodically

Sammy's vlogs ate pretty good.  I always laugh whwn him and Marko are fucking around, just being kids.

Sammy is a selling machine.  He took that golf cart shot like a champ 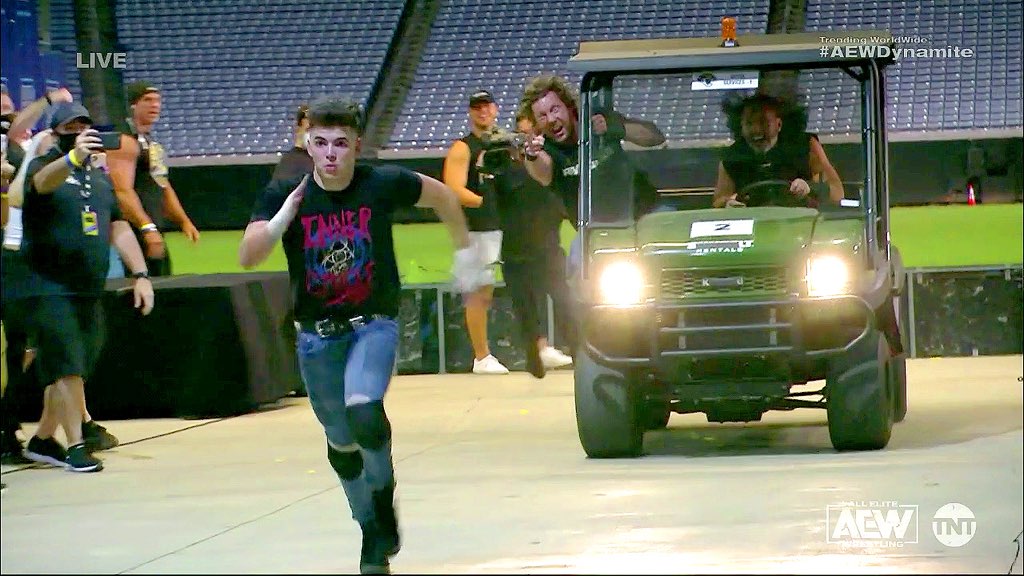 The looks on Omega and Hardy's faces are great