Crazy and probably much deserved, will see in 1 day.

Did you preorder fellow Tarnished? 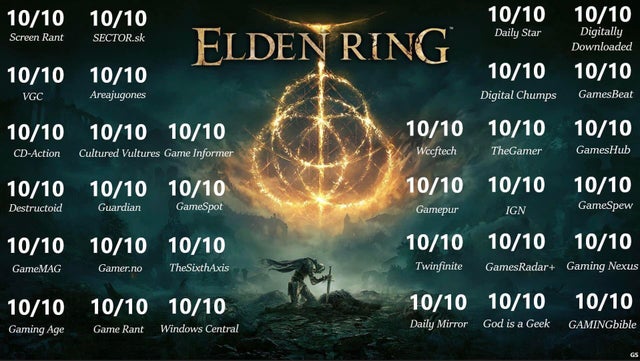 Is it pretty good?

Elden Ring is not only the best game From Software has ever developed, it stands firmly alongside the greatest fantasy-RPGs of all-time.

Elden Ring is the true triumph that FromSoftware was striving for all those years. Complete and utter triumph.

Elden Ring represents a truly amazing combination of various game elements that all come together to create something fascinating, special, and unforgettable. Elden Ring isn’t just the best game this year; it’s one of the best games ever made.

10s aren’t perfect, since nothing is, but they come as close as you could get in a given genre. The new leader to beat in its sector, we’re talking pure ecstasy.

Any elf nudity or sex scenes?

Im open to sex with an elf

Probably a dwarf too if I was drinking

Oh great, so its gonna be fucking shit?

I’ve never played any dark souls type game but this one seems interesting. I’m just worried it’ll be too much for me

I’ll definitely wait until we have some user reviews though

Did all the video game journalists give it 10/10 because you wind up banging a tranny or some shit in the game.

Played all of the From Software games, but holding out on this until there are “user” reviews.

Any elf nudity or sex scenes?

Im open to sex with an elf

Probably a dwarf too if I was drinking

Has their been nudity in a game since leisure suit Larry?

Crazy and probably much deserved, will see in 1 day.

Did you preorder fellow Tarnished?

Not super into gaming (played all of the Souls games) but never heard of a majority of those sites.

Currently the #1 game all time (it will go down a bit) on Open Critic. 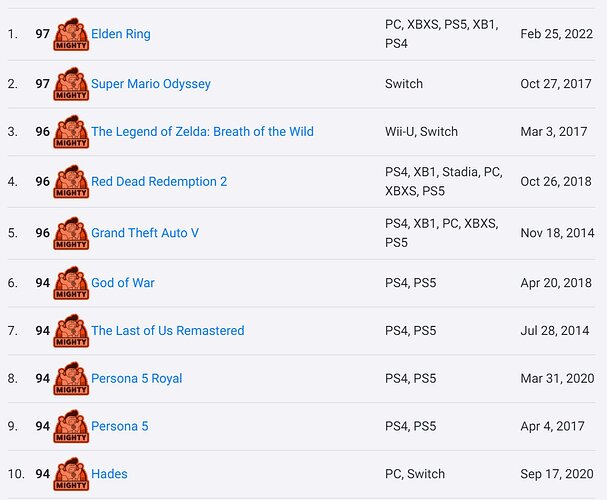 I see no reason to doubt this.

FromSoftware has done little to nothing to warrant any hesitation about this release. Their track record is strong, very strong. Possibly the most consistent studio in the modern era of gaming.

People may or may not like it when they play it, but what the reviewers are saying is that the game is extremely well made and satisfying to play.

So far almost all the big-name independent Youtube reviewers (SkillUp, FightinCowboy, etc.) (EDIT - forgot ACG and IronPineapple) are reporting the same, though some have noted a tendency for the PC version to stutter down into the teens for framerate if you play at 4K even on a 3080.

That said, I have loved everything that From has ever made, 5:00 tomorrow can’t come soon enough.

I don’t think it’ll stay on top of RDR2 and Breath of the Wild, but it’ll be top 5 all time. High praise indeed.

This is not some bullshit corporate trash that is getting rave reviews because it put a strong black woman in the role of a special forces solider. FromSoft is not some woke EA trash…at least not yet. I have no reason to doubt these reviews

I heard the elves are black

Let us all pray this is true.