The more I look into near the more I become impressed. 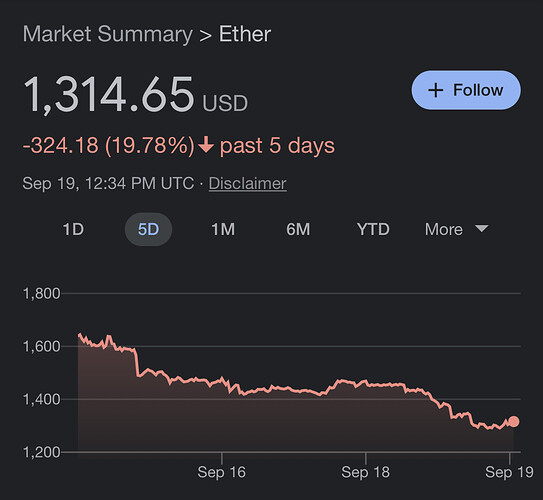 you’re an odd duck sometimes. i don’t think there is even any ETH maxis on this forum. not sure who you’re target is here. and it’s not like Bitcoin is doing much right now either.

you’re an odd duck sometimes. i don’t think there is even any ETH maxis on this forum. not sure who you’re target is here. and it’s not like Bitcoin is doing much right now either.

Plus ETH was in the 800s fairly recently, so…

Not sure if you’re aware but No coiners, ETH maxis and the legacy financial machine behind it as well as environmental groups and other establishment institutions have been using ETH (and” the merge”) as propaganda to shit on Bitcoin and Proof of Work.
Yet the token is down almost 20% since.
Blockchains are war. ETH is losing.

Recently?
It hasn’t been that low since before January 2021, almost 2 years ago. That’s when the last bull run started.

This reads like we’re on a bull run. Not sure if you meant for it to read like that…

For the stakers, sure it would.
But I think you meant it qualifies as a security according to the Howey test. That’s what I understood from his recent comments.

i’m sure people deep in the cryptosphere have pointed this out, but i do find it telling that the world’s governments have basically already constructed this regulatory dilemma where either the technology can’t exist because it isn’t green enough or it can’t function with any real utility because it’s incompatible with various financial regulations.

Regulators can do whatever they want.
Here’s the issue that most in the cryptosphere want to ignore…
There is only one crypto currency that was designed and has been tested to stand the onslaught of an adversarial regime. That’s Bitcoin.
All other will fold under the heavy hand of government and regulatory overreach.
None of them can stand against that except Bitcoin because of it’s true decentralized nature.

this is a surprising take from you. i like that you’re branching out intellectually and entertaining other notions. really speaks to your personal and intellectual growth

Aren’t there tons of validators?

As an eth bagholder this is unfortunate but true

Lol I have “entertained other notions”, but the fundamentals are what bring me to that conclusion. Give me something credible that would change my mind and I would. I did change my mind on Bitcoin as it is. The more I’ve educated myself on the technical aspects the more conviction I have in what I’m saying.
Technically speaking all other crypto fail to be as anti-fragile as Bitcoin. There may be some way to stop Bitcoin just as easily as others but I’ve yet to hear a good explanation. You can say I’m being a troll, or a maxi or a contrarian, whatever but no one ever tries to give any good reasons that overcome my objections.

price would still tank and liquidity would dry up if bitcoin was banned in most nations. you can’t stop it sure, but it’s value comes from demand. just like anything else.

That’s speculative but likely. Sure. And temporary. Not good for traders and those looking to make a quick buck but if you’re opting out, using Bitcoin within a Bitcoin economy you’re fine. I’d rather deal with that than surveillance state CBDCs. Wouldn’t you?