Normally I am a no frills kind of guy, but lately I have be invigorated by my new passion. Bird watching!

The key to being a good bird watcher is sitting still, and being silent (which are both fun activities in themselves).

So far today I have seen a cardinal and a pigeon. Two of my favorite birds!

I think watching birds is something people do once their life has peaked and they are afraid to look down and see the decline into old age that awaits them! Are you eating Grape Nuts before or after watching the birds?

What did you end up naming the new duck?

I don’t eat grapenuts, they’re a little too exotic for me. I’m a no frills kind of guy. I generally just munch on some plain granola while bird watching.

So what did you end up naming the new duck? The OG gave you tons of suggestions, the readers are chomping at the bit to know what you ended up naming that duck.

I decided that naming ducks is a little too exciting for me so I have just been calling him duck #2.

This morning I saw him walk by while I was reading a article about term life insurance. It was a very exciting encounter.

No name, huh, ok, I shall call him Grape Nuts. I’m gonna tell other OGers to call him that to so he shall be known all over the OG as Grape Nuts.

Years ago, after receiving a promotion into the Engineering Dept at my Company, i was in a 4 person meeting that included the VP of the Company, CFO, my Boss and me. In the middle of it, when all was quiet as these eggheads were over thinking something, a Cardinal landed on the tree right outside my Boss’s window. I decided the best thing to do to break this uncomfortable ‘what-the-fuck-am-i-even-doing-here’ silence was to say “Oh look, a bird!”. They all looked at me, looked at each other, im sure they all rolled their eyes, then probably began thinking they made a mistake with me. I mean, they didn’t. Meh, they probably did. Either way that Boss is long gone and im still here.

Moral is, fuck Cardinals. They stupid.

Oh quite the contrary my good sir, cardinals are actually very exciting creatures. Did you know that a cardinal can eat 3/8 of it’s body weight in one sitting, and STILL FLY!

How interesting is that?!

Cardinals are also very well known for their ability to spot out a fake plant way before other birds.

One time when I was acting silly I put a fake flower in my garden with all the real flowers. No cardinal would go near it! That was a very interesting day!

Cardinals are prey animals and humans are predators. Of course they hate me. What are you trying to say? Is this some sort of failed attempt to harass me?

I always wanted to be a nature photographer. Like working for national geographic or something like that, going to various corners of the world and shooting animals… on camera.

It’s better when you have a gun. You can sit for hours enjoying nature just like that, but you can also get organic free range meat to eat

While this does sound like a lot of fun, it’s not for me. I’m a no frills kind of guy. I dislike travel. Who would keep tabs on my neighbors if I left?

Not to mention the dangers that come with traveling. It does not fit in to my safety first lifestyle at all. No sir!

Though I do wish you the best. If you get any good pictures of cardinals feel free to post them. They are very interesting creatures.

Oh, here’s our new Company mascot. He showed up in our park about a month ago. We’re assuming he was dumped here by someone that had to get rid of him due to town ordinance rules, or the fact that he cock-a-doodle-do’s all fucking day. Either way, he’s pretty kick ass and has become very friendly. 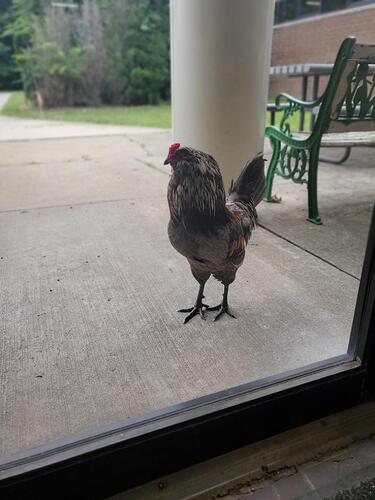 The interesting thing about roosters are that they are somewhat fast. I was reading a very stimulating article about term life insurance one day and I saw a rooster run by and it was exhilarating.

In my excitement I looked up info on a roosters foot speed (who wouldn’t right?!) and it turns out that the rooster is in the 89th percentile of speed for a animal who’s legs are less than 10 inches. Man you should’ve saw the look on my face when I uncovered that nugget of info!

I wish I could run that fast. Obviously I never would because it’s unsafe, but it would be very hip to be able to regale folks with tales of my foot speed.

God damn I hate this gimmick. You have yourself a root canal with a god damn screw you savage