Two dogs were roughhousing in a sunny backyard in Queen Creek, as sounds from a nearby little league game floated by. On the patio, a man in jeans and a button-down shirt was helping his son pump up hisbike tires.

It was one of those totally ordinary family moments. But for Daniel Harrott, who lived most of his life as a woman, just everyday existence as a man is alchemy.

“It feels like you’re getting to live for the first time,” he said. “And my children are getting to be who they’ve always wanted to be.”

Eleven-year-old Mason — he’s the one with the bike — is living as a boy, after being assigned female at birth. And then there’s Joshua, 13, whose brown hair falls around her shoulders as she sits in her wheel chair.

Her birth sex was male, but she knew from an early age that she was a girl.

Then there’s Daniel’s fiancée, Shirley Austin. She’s tall and blond and smiley. And transgender, too.

In Shirley’s words: “The whole family is in transition.”

All four of them.

Daniel thinks trans people have been in his family for 100 years. His grandmother’s sister was what people used to call a “cross-dresser.” Her behavior scared his grandmother so much that she made sure when she had a daughter that she — Daniel’s mom — dressed feminine.

“Of course my mother just gave that same lesson: ‘This is not OK. You must be a girl. This is who you were born to be,” Daniel said.

He kept waiting for makeup and women’s clothing to feel right. But that never happened, not after he got married to a man, not after he gave birth to two kids. Then, just last year, Joshua wanted to join Girl Scouts – despite being raised a boy.

That’s when Daniel was introduced to a word he had never heard before: transgender.

“And when I finally looked it up, and I realized, ‘Oh my gosh, they’re trans, and I know it’s true – because I am, too, and it’s been my whole life,’” Daniel said.

“I opened my eyes, looked in that dressing room mirror and went, ‘Oh this is it. This is perfect. This is me,’” he said.

About the same time, Daniel met Shirley, who was volunteering at a nonprofit for parents of trans youth. Like Daniel, Shirley had been married before. When she started transitioning, she figured she’d be single forever.

“I was never accepted before by people that really loved me, and we were married,” she said. “So why would any of that change?

As the kids befriended Shirley, so did Daniel. There’s an age gap — Daniel’s 41 and Shirley’s 62, but still, they fell in love.

“It was so freeing, because I knew I could be me, and they’re going to understand me for who I am,” Shirley said. “They’re going to know the hurts that I feel and how we can help each other.”

Joshua, a trans girl, was the first in the family to come out. She says she knew she was a girl since she was "6 or 7."

Shirley taught Daniel how to use a chainsaw. Daniel taught Shirley to memorize all the stones in her engagement ring, in case another woman asks. Daniel does the yard work. Shirley, the cooking.

Daniel explained that they’re actually “very traditional” people, who really see each other.

That’s Daniel’s biggest hope for his children, that they, too, feel accepted and supported as they grow up.

“I’ve been wanting to be, like, a doctor,” said Daniel’s daughter, Joshua, before being interrupted by her brother, Mason.

“You’ve been saying that since you were little!” he chided her. “I also said I wanted to be a doctor.”

And what does Mason want to be now?

“An artist,” he replied, with confidence.

Daniel will be happy with whatever they choose. He just wants them to be themselves. 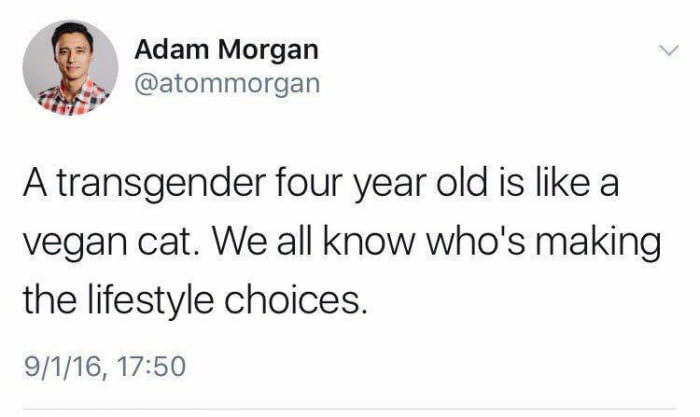 “Remember when the Honey Boo Boo Family was th most embarrassing family you could think of? Take a look at these fuck ups!”

I blame the modern left on the decline of mental health care in the west. The fact that this is becoming normalized shows a complete lack of reason and thought. It's catering to mental illness not treating it.