They would call him Brett 4500 if they knew the truth…

Make stuff up? Lol, ok sure, yeah now I remember you guys were so mad at Trump about increases in the debt and deficit. Hell, you guys were even cheering on Republicans shutting down the government over it.

Wait, that was when Obama was president.

Given enough time, I’ll be a Trump fan.

Occasionally some of you can take it, but mostly it just results in butt-hurt, which is still funny to me.

OMG head over to Reddit and watch the collective circle jerk of neck beards giving their expert opinion on this matter. They could link a Republican to literally anything.

Occasionally take what? Bad/mean words? If that’s what you mean it is incredibly hilarious coming from a cheerleader of the bad words are worse than actual violence side

This was their “evidence” 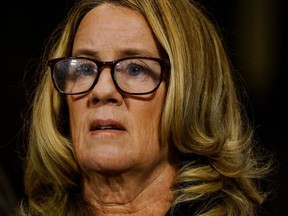 Will Ferrell as Janet Reno?

Make stuff up? Lol, ok sure, yeah now I remember you guys were so mad at Trump about increases in the debt and deficit. Hell, you guys were even cheering on Republicans shutting down the government over it.

Wait, that was when Obama was president.

why are you talking about things that happened 5-13 years and 2 presidents ago?

do you realize what you’re doing?

let’s take a topic and change it, move the goalposts, whatabout it and create a strawman argument… all the while telling everyone they are racists because you were ( are).

This was their “evidence”

The Ark of the Covenant?

I have one super liberal friend that actually told the truth and said fuck rbg. Everything that happened was her fault and she should rot in hell.

They made allegations with exactly zero proof behind them.

What was done to Kavanaugh was fucking revolting.

Exactly. There were four actual accusers. Three of them were proven to have made the whole thing up and two of them were arrested for interfering with an FBI investigation. Blassey Ford’s story was so full of holes it was ridiculous. She also seemed to be carefully coached not to be too specific during testimony. Because when she was specific, she was proven to be full of shit.

She said her friend was there at the party and witnessed the assault. Her friend said she didn’t know what she was talking about and was never at any party that summer. Others she claimed were there had no recollection of any party either.

The teasing. What bad words are you even talking about?

Because you think conservatives have been consistent. I countered that silliness.

The FBI Confirms Its Brett Kavanaugh Investigation Was a Total Sham

Oh, well, it’s not like he received a lifetime appointment to the Supreme Court or anything.