Bellator reported that the next rival of the legendary mixed martial arts fighter Fedor Emelianenko could be 43-year-old Brazilian Lyoto Machida, a former UFC light heavyweight champion. TASS informs about this, citing a source in the promotion.

On account of Machida there are 26 victories and 11 defeats in mixed martial arts. In April, he lost to Ryan Bader by unanimous decision.

Fedor Emelianenko will hold the next fight in Moscow on October 23. The fight with his participation will be the main event of the show. The Russian athlete has not appeared in the Octagon since December 2019. Then he knocked out ex-UFC fighter Quinton Jackson. That fight took place in Japan. 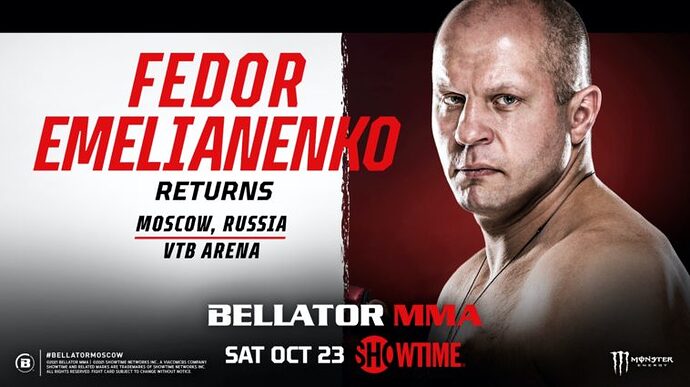 Fedor has a lot more miles on him than Machida.

I figured they’d give Fedor an easier fight to make sure he doesn’t lose in Russia. They gave Fedor every chance in the world to make it out of the Maldonado fight. Machida better go for the finish because we all know the judges will be leaning towards Fedor.

Fedor can’t take a jab anymore, but he can still hit hard. So they book him against a guy that is hard to hit with great counter strikes. Sounds like a recipe for disaster if Bellator is hoping for a hometown win. And then we will have to listen to all the Fedor haters talking about how he got KOd by a middleweight again. I love Fedor, but I really wish he’d call it quits. They must really think Machida is done to set this up.

Neither can take a shot anymore but Machida is a lot harder to hit.

I can see machida timing one of fedors looping punch combos with a blitz and ending his night. Fedor could also catch machida on the outside though. Fedor still has some speed even in his old age. Let’s see if he comes in lighter since it’s machida or if he’s even more dad bod than usual.

I still get excited watching Fedor fight, and if he had just aged and slowed down a bit and was even 50% of what he was in his prime, I’d be totally in support of him fighting fighters at similar stages of their career.

But Fedor nowadays, the moment anything beyond a glancing jab lands, the night is over.