Was the video chopped up? It seems as if they were arguing about something that took place off camera, then they clinched up and this happened. Or did they clinch up first, and the start of the video is them arguing about the underhook jerk motion that was shown later?

I honestly can think of no realistic scenario in which it’s justified. (Unless there was a personal beef in which an “injury” was actually called for). I’m a fan of a level of gym enforcement. But, no amount of gym enforcing would, say, justify a quick heel hook intended to injure. This is comparable.

Ok. I’m a wrestler first, and then I did BJJ for a while. I don’t claim to be an authority on BJJ when compared with true students of the game, but this exact thing happens in wrestling all the time. No one bitches and moans. No one talks shit about their training partner. It’s just part of the sport. If you want to wrestle, you learn not to dig for a half assed underhook or you might get your elbow/shoulder cranked like that. To do it with malicious intent is different, though.

Agreed, with a few caveats.

First, you’re right that wrestlers – even average HS wrestlers – aren’t super susceptible to the should wrench. Jones pulled it off against Glover, but not against DC – and Jones was born to be good at that move. I’ve had guys who are pretty good try to do it against me and it just . . . doesn’t work.

Second, using the wrench to injure just isn’t done in wrestling. Usually, you need to be using that overhook as a whizzer, or else you’ll be taken down. The wrench won’t work coming from a whizzer, because your opponent will make sure the underhook is no longer lazy (otherwise, the whizzer will bring you down). Going takedowns in BJJ is different and there are more times of sorta standing around, and more lazy underhooks (I don’t mean that to deride takedowns in BJJ. I think there are way more calculations happening. I am also more relaxed and tepid when going takedowns in BJJ).

I don’t think wrestling has a real equivalent move. We have tons of punishing moves – hand fight crazy hard; body scissors that are probably illegal; front headlocks where you get the Dave Schultz choke – but they aren’t really going to cause an injury. I guess a wrestling equivalent would be a wrestler’s guillotine/twister, and really cranking? That’d for sure be a dick move.

Dick move, he outweighs the guy by 100lbs, why crank on something?

The equivalent in striking are probably the oblique kicks 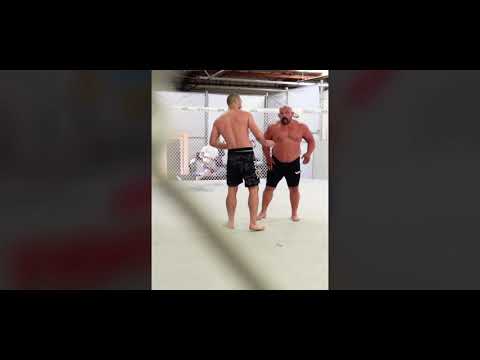 Orlando has had some shady allegations thrown his way the the past few years. One was hooking up with a student who was “groomed” when she was like 15. And sleeping with his students wives and shit. Also he made several bizarre posts online. Pretty sure he had a number of his students leave when some of that came out.

Vonly move I do 100 PERCENT IS TRIANGLE

Sean Strickland I believe is in the top 10 in the UFC MW division. Pretty damn high level.

Strickland is good. He literally travels around SoCal looking for new sparring partners because he beats everyone up at certain gyms

It’s shocking to me that people would make that claim that this isn’t a dick move. It’s dirty as hell.

Big guy knew what he did

Dirty and intentional… If you listen at the end he speaks motive . He says somthing to the effect “oh and you tell evryone I font belong here, then get mad when I hit a submission.” ( I only watched it one time and honestly I didn’t feel like rewinding it a bunch of times to get the quote exact). He keeps referring to it as a submission but all it is is a cheap shot to possibly hyperextend somebody’s elbow.

Is that the big guy in the video?

Yes, it’s Orlando Sanchez, who has competed in ADCC

Dirty. He did it hard twice.

The equivalent in striking are probably the oblique kicks

Yeah. I throw oblique kicks all the time in training - to the thigh. Even if I was justly mad, it’d never be okay to throw it to injure.

That fat micky mouse rat is dirty as fuck

Orlando is a fucking scumbag. He groomed a 16-17 yo female student and was banging her while being married when she turned 18. Compete fucking trash. Brags about all of the coke he supposedly used to do. He makes Carlos a bunch of money so of course barra didn’t do shit. A bunch of employees and students left over it.