Flying low over sharks in the Fl Keys, on a paramotor 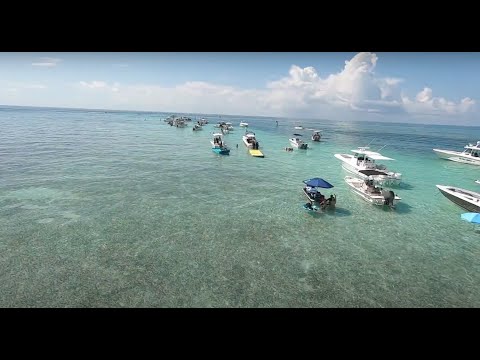 Florida is absolutely full of sharks. They’re everywhere. Much less dangerous than gators.

I am thankful for GoPros & morons, so I can experience things like that while sitting on my ass inside, taking zero risk.

Florida is absolutely full of sharks. They’re everywhere. Much less dangerous than gators.

Pretty much, just don’t reach down to pull a fish you caught out of the water at the side of a boat. Sharks love to hit a fish right then.

And something worse than both sharks and gators are the crocodiles. I have been going to the Keys since the 80s, and had never seen a croc. I’ve seen thousands of alligators, even chased them off roads so I could drive past. But the crocs were pretty low in numbers. Apparently that is changing, and their numbers are way up. Croc, unlike gators, hang out in saltwater. Well I was down in the keys last month for the first time in about 4 years, and thought ‘maybe’ I’ll catch a glimpse of a croc. I figured it would be unlikely. First place we stopped I walked down to the shore and there was a 4 footer right there. First time in my life seeing a croc in the wild. Crocs are more aggressive than gators and will swim in open water. They found one recently on Hallendale Beach, which is a major tourist/beachgoer area on the Atlantic - no swamp or mangroves around.

So I’m not too keen on swimming in the Keys any more. Kill it with fire!!!

I did a 20 mile kayak trip through the southwestern Everglades in November hoping to see a crocodile. I never did. I did have one asshole gator start swimming right at me. I swung my paddle at that fuckers head and missed by like 2 inches then he went under water. Lol I took out my .38 after that in case he wanted to fuck around some more but he left

We were in South Florida last month.

Our friends in Miami took us to the coconut grove sailing club, and there were signs all over about a crocodile. My friend said he has a rock he suns on but we didn’t see him.

I didn’t know they were that common.

We hot the keys after, it is insane how many sharks there are. We were kayaking and paddle boarding around one of those mangrove islands out by where that old light house was they claim was Hemingway’s fish camp, and all you saw were dark shadows. We fished the same area a few days later. The guide dropped in a frozen chum block and it took all but 15 seconds for the boat to be surrounded by sharks. All lemons, then a bull cam through. The guide identified the bull and said he hadn’t seen one there before.

Bull sharks are always around artificial reefs and wrecks. 20 of them show up if you spear anything. Bull sharks might be the only sharks as dangerous as gators

What sort of Crocs are they? Are they escaped pets?

American crocodiles, theyre native but our ancestors didn’t fuck around with dangerous dinosaurs that would eat your children so they were almost extinct in Florida

In for later when I can watch the video