It’s odd that it didn’t do more buys.

There were so many people trying to stream it that I literally couldn’t find a stream that wasn’t overloaded. I was unable to stream it ultimately.

Generally when I’ve seen a fight be near unstreamable they do crazy good buys.

I was honestly expected 3-4 million.

Floyd had 20ish million guaranteed with 50% of the PPV, he said, and Floyd can claim whatever about money, but who knows, he said he made 30 million from sponsorships on top of whatever his cut is, so roughly 75 million for Floyd.

Logan probably in the 15-25 million range.

With 2 fighters making upwards of 100 million, I can’t imagine Showtime or anybody else on the back end did well, I would assume most others involved barely broke even or lost money.

You think Showtime puts on fights to lose money?

I don’t think most companies do things to intentionally lose money, but I don’t see where the money is at for them for this event to have been worth Showtimes effort if that buy number is accurate.

Billionaire hedge funds with the brightest financial minds, the rules in their favor, and the ability to coordinate with other hedge funds to manipulate the market, lose billions on bets sometimes, so I’m sure Showtime could get fleeced on a PPV that didn’t pan out.

1M is low for the clout this event had.

They don’t set out to lose money, but it certainly wouldn’t be the first time it happened to them…Showtime paid a crazy amount to get Floyd away from HBO to begin with. Then with the way Mayweather Promotions deals are structured, all the financial risk is on Showtime. So if a fight doesn’t sell well, Floyd and co. Are shielded and it’s Showtime that takes the loss. Floyd gets enough guaranteed to cover all promotional expenses and still come out ahead when you add in all the other revenue streams as already mentioned…

And if the fight does sell well, Mayweather takes home even more.

I don’t know how a dude that maybe can’t read has the ability to strike a deal with a major company that is so one sided.

I have only paid attention to boxing for about 10-15 years so Floyd is the only person I’ve seen make such one sided deals, maybe it’s the norm for whoever the big name in boxing is.

I read at least a million

$50 x 1 million ppv buys = 50 million. Half of the PPV money goes to cable provider (direct tv, Spectrum, Dishnetwork, etc). So that leaves $25 million for Mayweather, logan and Showtime. Looks like showtime took a big loss if they guaranteed Mayweather $30 million.

Thanks for that and this is what I was thinking. No way those guys got anywhere near what they are claiming and no way Showtime is paying Floyd more than they pay themselves, I mean I would like the fighters to get paid more than the promoter but I just don’t see that happening.

I don’t think the fighter pay issue should be obfuscated by Floyd Mayweather literally admitting he was doing a legal bank robbery with this fight.

You think an event that took in 50 million in PPV’s did another 100 million in other revenue?

I don’t think the fighter pay issue should be obfuscated by Floyd Mayweather literally admitting he was doing a legal bank robbery with this fight.

It’s not a robbery if the bank opens up their vault and invites you to take what you want.

Floyd claims $30 million in his personal sponsorships. As for Showtime there’s event sponsors, a cut of concessions, the gate.

More than likely not a fucking chance.

But I agree, either the fighters are lying or Showtime got hosed, because all of this discussion isn’t even taking into consideration, wasn’t there a world champion in the co-main?

Just saying, lot of mouths to feed for a PPV that only dud 1 million. 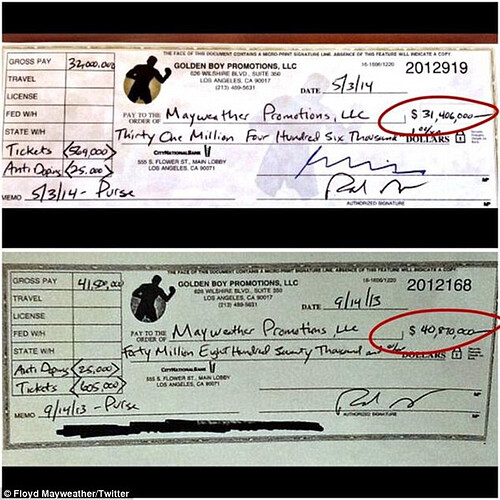 You’re showing cheques of which the earliest one was on 2017. What has that got to do with anything we’re talking about?

Just my 2 cents but I reckon it’s probably around a tenth of those numbers Floyd has always inflated his numbers.

However I certainly believe he made a few Million for that light sparring session and left the door open to go back for more.

I guarantee Showtime probably only signed Jake Paul to make Floyd vs Jake.

No, they signed him because he has 14 million YouTube subscribers.