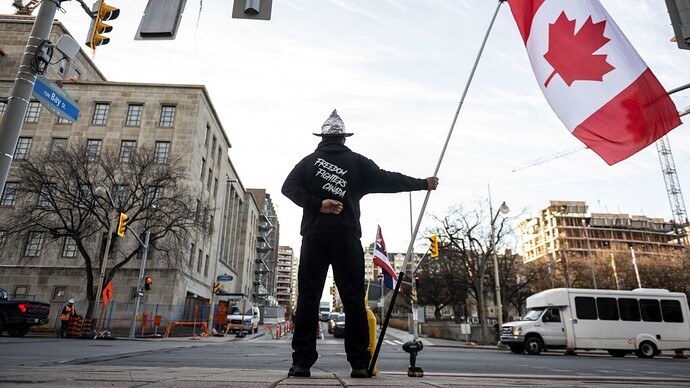 An organizer of the 'Freedom Convoy' says he's planning a reunion in Ottawa in February. James Bauder, the founder of Canada Unity, a group that called for an end to all vaccine mandates, posted on Facebook calling for a 'Freedom Convoy 2.0' Feb. 17...

Why must they do it during the coldest part of winter? This one will be a fail imo.

But I’ll be there!

Last time, Trudeau let these guys fuck around for a few weeks, then he made them find out

He is going to crush them. Again.

Trudeau made a fool of himself in front of the whole world.

Trudeau made a fool of himself in front of the whole world.

Unfortunately the world turned a blind eye and he is still running the show. Kind of reminds me of dictators who did shit in their initial years of leading and the world not paying attention until it was too late…

“Somebody throw a tranny under one of those semis so we can make this a hate rally, eh?”

I read that this protest is officially set for FOUR DAYS. What would be the bootlickers excuse to even disallow the protest? If the protesters try to maintain it past 4 days, maybe, just maybe, the bootlickers would have an argument. They have none now.

Fascists, extremists, etc. won’t work all the time you dumbfucks.

He shut them down, froze bank accounts, and jailed the organizers

Trudeau shit on the protest and there wasn’t a goddamn thing they could do about it.

Protestors are the ones who looked like fruit booty cowards

Where did I endorse what Trudeau did?

I am just stating facts.

These protestors looked like complete chumps after getting their shit kicked in.

Imagine if TRUMP had dealt with BLM rioters with the same iron fist that Trudeau did.

Either you are trolling or just a retarded faggot.

Trudy showed what a bitch he really is by faking covid and hiding under his bed. Lol at evoking the Emergencies Act for bouncy castles.