In 5 hours on the BKTV app it begins. 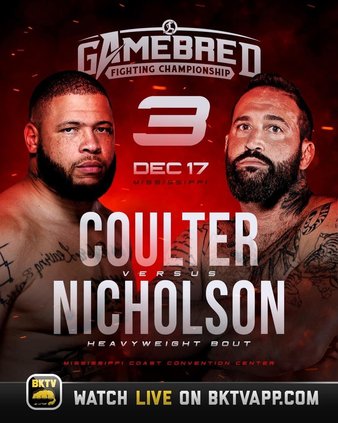 Old war dog Tony Lopez is back at it again taking on Alex Nicholson in a HW main event.

After a stint in ONE SuperSeries where he picked up wins over Andy Souwer and Elliot Compton and losing by KO to reigning ONE KB LW champion Regian Eersal I hope Anthony gets a win here.

These cards are ALWAYS subject to change last minute lol but 2 more HW bouts are scheduled aswell as a LHW battle. Bare knuckle MMA…was hoping Rob Emerson would return after a quick KO of Charles Bennett.

Lol Monica Medina won by referee stoppage GNP 4:18 in the first round when asked how she felt by Dan Lambert she yelled “Fucking amazing!!”

And Dan didn’t miss a beat saying “Alright, fucking amazing” made me lol

First 3 fights are first round finishes.

These people make me think i could go pro at 50 and be champ. Jesus. Do they trane

The co main event is the first fight to hit a 2nd/3rd round.

What is the commentator’s name? Jamie Black? Something like that?

That was a weird ref call in the main event. Lopez was down and about to get pounded out and the ref stands it up. Didn’t change the fight outcome but it was weird.

Robin Black use to be a Canadian new school glam rock musician had his Much Music run than had I think around 10 MMA fights, been at TKD for decades.

Pretty strange yes, he stopped the fight for a moment to see if Tony was fine or? Weird as said lol Tony got up in a hurry pissed though the tough sob

Nicholson has an interesting demeanor eh? Hear what he just said to Dustin Clements?

Dustin got a first round KO earlier and GFC brought him into the cage to set up a future fight, Nicholson grabbed the mic and told him “it’s disrespectful you think you can fight me, I’ll take a few shots of tequila and knock you the fuck out in the hotel lobby” LOL goddamn he’s a blunt, ice cold mofo love it.

Robin Black use to be a Canadian new school glam rock musician had his Much Music run than had I think around 10 MMA fights, been at TKD for decades.

Thanks. I fucking hate him.

He can be a bit much but he has Mitch Chilson Esq enthusiasm and I do appreciate it but more often than not he needs to say a bit less otherwise I’m a fan.

He needs to learn how to talk first. I couldn’t stand to listen to more than a sentence because of his lisp.

He reminds me of John Perretti, for those old school guys. He tries wayyyyyy too hard.