Ghosts of the London Underground 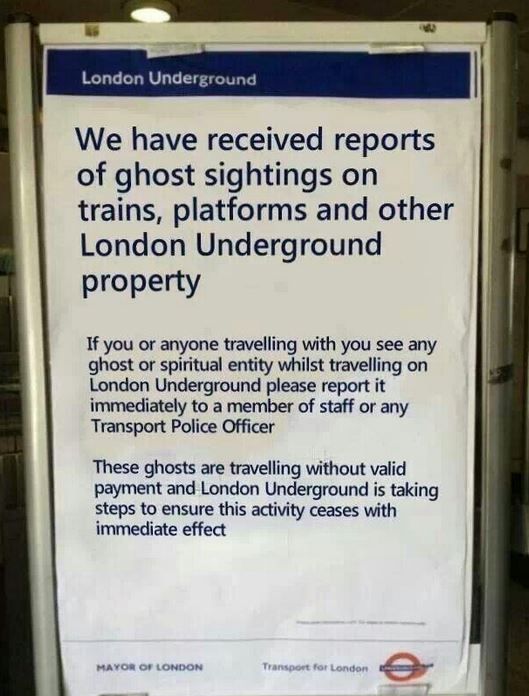 Lorenzo Monteforte spotted this sign in London's subway system. There are apparently numerous ghosts infesting the London Underground. And "infesting" is the right word if this sign is correct. Spirits, pay the fee. No more floating through the turnstile gates.

The most famous ghost on the Underground is Sarah Whitehead, the Black Nun of Threadneedle Street. In 1811, her brother Philip, a bank cashier, was charged with forgery. He was hanged the next year. Sarah went insane and, for decades, visited the bank, asking for her brother.

According to legend, she still haunts the area, which is now an Underground station. Dressed in black, Sarah asks people where her brother is, then vanishes.

Video here. I cant get the embed code to work though, sooo

This is also Sarah Whitehead, not the ghost but  Australian Catholic University (ACU) student Sarah Whitehead has been awarded the 2010 St Vincent’s and Mercy Private Hospital Scholarship for Indigenous students.

Why? Because would bang, bros.

back on track,
Bank of England

For almost 200 years Britain's famous Guardsmen patrolled the corridors of the Bank of England in the City of London.

Their nightly vigil was to protect the gold in the Bank's vaults and started back in the 17803 at the time of the Gordon Riots in the capital. The patrol ended in 1973 - but the Bank's other nightly visitor still makes her rounds of the Threadneedle Street buildings and gardens, searching for a lost loved one. She's the Black Nun - so called by those who have seen her because of her thick black clothes and the dark veil which hides her face. The apparition is supposed to be the ghost of Sarah Whitehead who roams the building looking for her brother Philip. At one time Philip worked as a clerk in the Bank but in 1811 he was arrested and charged with forgery. He was convicted and hanged - the punishment in those days for such a crime.

When Sarah didn't hear from her brother for some time she went to the Bank to look for him. The news that Philip had ended up on the gallows sent Sarah out of her mind. The next morning she was back at the bank, dressed in mourning clothes and a thick black veil, asking if anyone had seen her brother. For the next 25 years she would walk up and down Threadneedle Street looking for Philip, stopping passers by and going into the Bank itself. But her lonely search didn't end with her death. Shortly after she was buried in the graveyard of the City church of St Christopher-le-Stocks, which later became part of the Bank's gardens, the lady in black was seen again.

The Black Nun, as she was then christened became a legend among the clerks who worked in the Bank at the turn of the century. Many of them claimed to have seen the desperate woman as she searched for her long-lost brother. One man claimed to have seen her in the old graveyard gardens, sobbing and pounding a stone slab with her hands. The Guards and the gold may be long gone from the Bank, but Sarah Whitehead still keeps up her search for the brother who never came home.

What happened with that 'ghost' caught on cctv at the tower of london. Security guards said the fire doors kept being opened but no one was ever there when they checked it out. I'm assuming it was a hoax

Jored1990 - What happened with that 'ghost' caught on cctv at the tower of london. Security guards said the fire doors kept being opened but no one was ever there when they checked it out. I'm assuming it was a hoax

She enslaved them via possession and forced them to kill each other with their flashlights. It was all caught on security cam, too, but the UK covered it up and are currently trying to reestablish their connections with the Vatican to send an exorcist.

Oh yeah, bro. Would bang.
That picture is 3yrs old, though, I think. Maybe she got hotter? Got into a little drugs, picked up some milage, and likes doing tequilla shots out of your mouth. Maybe.