As some of you know I'm trying to fulfill some common requests before leaving BE for Bleacher Report at the end of the month. I don't know how many kickboxing fans dwell on the UG but I think everyone can learn something about polished, cerebral striking from examining Giorgio Petrosyan.

Hope you don't mind clicking the link and as always all feedback is very much welcomed! 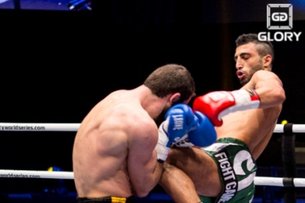 In the coming weeks I want to take the opportunity to thank the Bloody Elbow community for all of it's support and encouragement by writing about as many of the most requested fighters for analysis as I can fit in. While I may be forced to focus on one fight for some of them, as I am today, I hope that I can satisfy some desire to learn more about these fighters and whet the appetites of my readers as I continue my work on other platforms. Today we will be looking at a fighter whom I reference rather often and whom I believe to be one of the finest technical strikersever, let alone of the currently active crop, Giorgio Petrosyan.

Petrosyan is rather disliked by many fans because he is a decision fighter, much like Masato, and while he does attempt to finish his opponents he is more often than not unable to. Giorgio's left straight is venomous and thrown with momentum rather than a push, but he will rarely swarm on his opponents when they are not fighting back. Now this is not a bad thing, I like punching to hurt and to finish as much as anyone but more good fighters have been knocked out in trying to finish their opponent than have been sticking to an intelligent, controlling game plan.

The key word there was controlling - Giorgio Petrosyan is one of those amazing fighters who doesn't seem to rely on any one trick too heavily but can still make elite kickboxers look very average and he does it through strategy alone. This is one of the reasons that I examined his techniques in my first ebook, Advanced Striking. We spoke about this phenomenon briefly when talking about Prince Naseem Hamed - there is a lot more going on than can be seen in this kind of fighter's technical unorthodoxy when they are fighting opponents who average 70-80 strikes a round and reduce them to less than 30. Petrosyan more than anyone else in the kickboxing world is in to controlling the fight. I will demonstrate my meaning by focusing today on his bout with Dutch kickboxing great and K-1Max's first champion, Albert Kraus.

The first thing which might not jump out but is integral to Petrosyan's success is his use of the teep or push kick. K-1 was dominated by kickboxers who were far more inclined to using the so called "Dutch style" of kickboxing. A style which came to prominence under many of the Dutch kickboxing pioneers such as Ramon Dekkers, Rob Kaman, Ernesto Hoost and indeed Albert Kraus, it focuses on throwing a flurry of punches in order to force the opponent into covering and then landing a hard low kick or knee. Petrosyan and Buakaw Por Pramuk are perhaps the only fighters at the top level of K-1 who commit to the teep with any success. The teep is a fight winner, plain and simple and is a ridiculously under-rated technique. Saenchai Sor Kingstar is perhaps the finest Muay Thai fighter on the planet today and his fights are a clinic in using the teep to frustrate and wind the opponent without letting him get any offense going.

Here is a little collage of Petrosyan's teeping during the bout with Kraus, there were quite a few more than these but these six are more than Kraus has thrown in any fight in his storied career.

The teep is not only a good winding weapon and an excellent method of jamming an opponent's offense in a pure stand up bout, it is a means to control the fight. If you want an opponent against the ropes, hit him with a hard push kick - this is how Bas Rutten was able to swarm on much better technical strikers such as Guy Mezger and Maurice Smith in Pancrase - if you want to stay ahead on the scorecards and limit the number of exchanges,teep him. Through effective use of the teep Petrosyan makes men who are known as combination strikers struggle to get in range to throw punches unless Petrosyan allows them to rush in, then he normally has a counter punch or knee waiting. 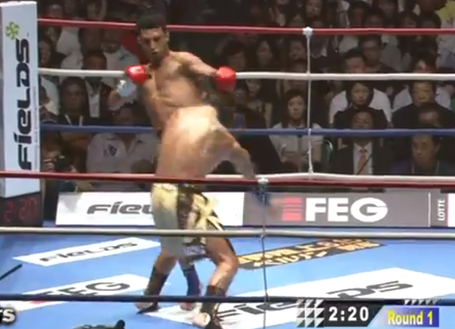 The major difference between the Dutch kickboxing style and Petrosyan's is that where the Dutch flurry to set up kicks, Petrosyan uses his light lead leg,teep led style of traditional Muay Thai to get into position to land punches. He is almost the reverse of the Dutch tradition in that regard but in fact is a much better boxer than most of the kickboxers the Netherlands has ever produced. Landing a southpaw jab is typically a hard thing to do, it's just so easy to stop with your lead hand (as Rashad Evansdemonstrated almost a hundred times and then did nothing to follow up against Antonio Rogerio Nogueira at UFC 156). Petrosyan's teeps serve wonderfully to irritate his opponent and take their mind off of the boxing game however.

From the first engagement in the second round against Kraus, Petrosyan used his light lead foot from his traditional Thai stance to feint a teep then land with it far in front of him to land a traditional boxing style jab between Kraus' hands.

You will notice that his lead foot is slightly inside of Kraus', this is a brilliant way to shorten the path of a southpaw jab, placing one's lead shoulder inside of the opponent's, but it does give the opponent a great opportunity to throw the jabber over his lead leg should they end up close. Joe Calzaghe and Petrosyan both routinely use the southpaw jab with their lead leg inside, and both have been tripped off of it, fortunately with no consequences as they are not MMA fighters but it is worth noting that this angle has a good degree of danger for mixed martial artists.

petrosyan is awesome, nice write up

sub for what i'm sure is another great read!

Also, Jack, as an orthodox fighter, what are some solid counters against a southpaw's lead teep? Many thanks!

Somewhere, Mike Goldberg is fapping to this.

petrosyan is awesome, nice write up

Training with Ole Laursen for his fight march 2nd

TTT for The Doctor

Do one of these on Badr Hari...

He makes elite, top shelf strikers look like amateurs. He is an absolute treat to watch.

TTT, every one of JS's articles are must read

One of the best kick boxers around. Dude is awesome.

Interesting article Jack, but the tools you mention, Buakaw has it better refined and in their head to head, Buakaw shows he is better at it. Petrosyan's head movement was not existent against Buakaw because he know Buakaw would catch him unlike the Dutch style fighters. Petrosyan does have better hands than Buakaw but if you're going to talk Muay Thai, Buakaw has mastered more tools of the trade.