Grill Like the Chefs: Throw Everything Onto the Fi

Grill Like the Chefs: Throw Everything Onto the Fire
By JEFF GORDINIERMAY 24, 2016 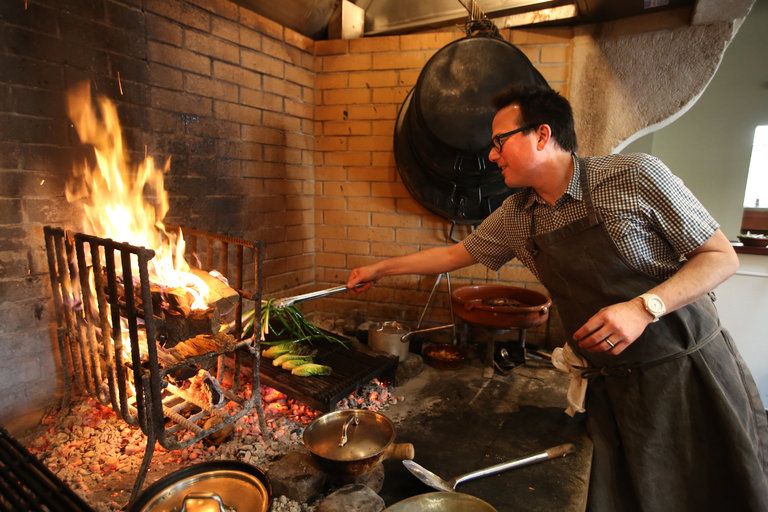 Looking to improve your cooking outdoors? One way to start is by listening to the pyromaniacs who do it every day, indoors.

In the last few years, a rising generation of chefs has pledged its allegiance to the primal appeal of roaring flames. You can see and smell the evidence -- the orange glow of wood embers, the pervasive cologne of smoke -- as soon as you step into their restaurants, whether the home fires are burning in Chicago or Seattle or Oakland, Calif.

And while it's unlikely that many home cooks have the elaborate South American- smoking and grilling equipment that Karen and Quinn Hatfield show off at Odys and Penelope in Los Angeles (not to mention the tidy arsenal of almond and red oak logs piled to the ceiling), these experts have a useful message to impart: Throw everything onto the fire.

Many amateur grillers, long liberated from meat-and-corn convention, have already taken this road. They're out there charring watermelon, radicchio and eggplant.

But keep going, and you'll begin looking at your charcoal grill or wood fire in new ways. Shove ingredients you may never have considered into the fire, above it, beneath it. Avocado? Yes, and we'll tell you how. Cabbage? Absolutely. Tangerines, carrots, leeks, bok choy, fish heads? Why not?

We've all learned to internalize the mantra "fat adds flavor." The same goes for smoke. As soon as you see the fire as a vehicle for charring and perfuming ingredients with deeper layers of flavor, possibilities expand.

Andrew Brochu, the chef at a new fire-focused Chicago spot called Roister, has even found himself making ramen at home over the open flame, letting the flavorful smoke scurry across the bubbling broth.

"We just put pots and pans on the fire," he said, remembering one patio experiment with colleagues. "It was funny how shocked people were."

Renee Erickson, the chef at the Whale Wins in Seattle, where vegetables and a wood-fired oven operate in harmony, loves the way an hour or so in contact with the coals transforms whole onions and leeks. She nestles them right on top of the molten core of the fire and waits until the skin blackens and the bulbs become noticeably juicy and squeezable.

"They get kind of creamy on the inside, and you peel the outside off," she said. "Onions turn into onion pudding."

Scoop out that smoky, creamy center, give it a dusting of good salt and a few glugs of olive oil, and you already have a side dish. Or, as Ms. Erickson recommends, convert the cooked-down interior of a leek into a sauce or a dip by whipping it into aioli or yogurt.

Or do what Nick Anderer does at Marta, a Danny Meyer restaurant inside the Redbury New York hotel on East 29th Street. "We don't have anything but fire here," Mr. Anderer said the other day. "We're forced to think in different ways."

Tear off hunks of bread, tossed with a generous pour of olive oil, "then just let them sizzle in a warm part of the grill," he said. ("They require some babying," he cautioned.) Now you have the makings of a next-level panzanella salad.

Cook some sturdy nebrodini mushrooms until the grill marks show, and slide them right into a bowl of lemon juice, mustard greens, olive oil and thyme for a salad. Roast florets of broccoli before letting them "get bloomed," as Mr. Anderer describes the process at Marta, in an apricot puttanesca with black olives and pickled chiles. When they're still hot, they're more likely to soak up the sauce than if you marinate them beforehand.

He always wants to bring the smoke to a piece of fish, but home cooks may fear that a fillet will stick to the grill or fall apart in the heat.

So here's a tip: Start by placing the fattier, skin-covered side of a fish on the grill, keeping a pan at room temperature at the ready. When the skin side is done, after six minutes or so, "flip it like an over-easy egg," Mr. Anderer said, onto the unheated pan and allow the flesh to cook from its own residual heat. That way you get the smoke without worrying about the stick.

And don't stop there, said Russell Moore, a leader of the pyro vanguard at Camino, in Oakland. After grilling a fish fillet, Mr. Moore may go back and get the remaining head and spine of the fish and put them on the fire for a quick browning. He uses those smoked leftovers as the base for an intensely flavorful fish stock.

By placing a bowl beneath whole roasting ducks, Mr. Brochu, the chef at Roister, discovered that he could collect the fatty drippings for a meaty vinaigrette to brush on roasted stems of fennel. (He mixes two parts of drippings with one part Banyuls vinegar, then adds a little sugar, salt and diced orange and lemon.)

By slicing oranges into thin disks, threading wires through them and hanging the slivers a few feet over the dying embers overnight, Mr. Brochu found he could create "beautiful, delicious citrus chips that we haven't manipulated in any way."

Thinking differently about fire means thinking differently about time. The perfect moment to make baba ghanouj is when you already have a hot grill on hand. Mr. Moore, at Camino, suggests putting a whole eggplant on the fire -- on the medium-heat coals, not the molten-red ones. You should turn it with tongs now and then to make sure it's evenly cooked, and then let the metamorphosis run its course.

"At some point you can feel it collapse," he said. "It's pretty obvious." Let the eggplant cool down after the core has gone all melty, and you have the raw material of a Middle Eastern dip -- even one that you may decide to make the next day.

"It's so easy to make that into something tasty," Mr. Moore said.

Few items could be easier than the bok choy recommended by Bryant Ng, an owner and the chef at Cassia in Santa Monica, Calif. Blanch the bok choy in salted water to tenderize it, then dry it, brush with canola oil (or another neutral-flavored oil), and lay it on the grill until it starts to darken but not burn

"It really, really absorbs the smoke flavor," Mr. Ng said. "Better than, quite frankly, a burger." Next, dip the stalks in oyster sauce. And if you haven't made any, he said, "buy a jar of oyster sauce."

One signature dish at Cassia offers a case study in using fire creatively. Grilled pigs' tails come out of the raging fire (after just enough time to give them a crispy crust) with such a sticky, meltingly tender texture that they're practically viscous.

"It's actually the easiest thing," Mr. Ng said. He braises the tails for three or four hours beforehand with fish sauce, honey and garlic. "It doesn't have to be pigs' tails," he said. "It could be ribs." The fire is just the final step.

It probably shouldn't come as a surprise that California chefs, with their bottomless bounty of first-rate produce, are inclined to throw fruits and vegetables into the flames. They're also apt to stress the importance of listening to that produce.

At Odys and Penelope in Los Angeles, the Hatfields are fond of giving carrots a good 20-minute char before splashing them with a glaze of brown sugar, soy sauce, ginger, garlic and balsamic vinegar. Softened carrots soak up sauce, but there's no point in marinating them in advance. "Carrots are so rock hard, they don't absorb anything until they've been cooked," Karen Hatfield said.

A kind of alchemy occurs when char meets sauce. One of the simplest dishes at Odys and Penelope involves taking cabbage (an ingredient that normally plays a subsidiary role in a backyard barbecue, as coleslaw) and blackening it up (while breaking it down) on the grill. After about 20 minutes on the fire the cabbage is chopped, then smothered with a Caesar dressing.

An avocado, like a head of cabbage, is something rarely associated with grilling, but once you consider it, your world opens up. At Bird Dog in Palo Alto, Calif., the chef Robbie Wilson has been getting a lot of attention for peeling avocados, removing the woody seeds, giving the avocados facedown grill marks and the fragrance of smoke, then filling their warm empty craters with spoonfuls of ponzu sauce.

"That avocado's going to be on my tombstone, but I'm O.K. with that," Mr. Wilson said. "I think it does embody what makes California great."

One of his more interesting tricks involves fire and citrus. He and his team give whole satsumas a spin on the flames, waiting and watching until the outside of the fruit has darkened and the inside has softened. They later slice up and cook down the fruit to create a smoked marmalade ("bright orange with little flecks of black in it," Mr. Wilson said) that they fold into other dishes, like a plate of Wagyu beef.

Does that sound too hard? Not if you open your mind, Mr. Wilson said: "The home cook can't be afraid."

I've "rescued" thinks that fall into the fire from time to time and they generally just taste burnt...