A gunman disguised as a Fedex delivery driver broke into the New Jersey home of federal Judge Esther Salas, killing her son and wounding her husband. https://t.co/MQwmFSWcFb 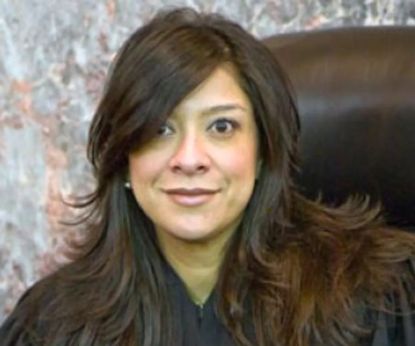 The son of New Jersey federal judge Esther Salas, pictured, was killed and her husband critical after both were shot by a gunman dressed as a deliveryman at their North Brunswick home Sunday, July 19.

A gunman disguised as a Fedex delivery driver broke into the New Jersey home of U.S. District Court Judge Esther Salas on Sunday evening, fatally shooting her 20-year-old son and wounding her husband, according to a report from the New Jersey Globe.

Salas, who has served in her position since 2010, was unharmed.

Her husband, 63-year-old Mark Anderl, is a criminal defense attorney and former Assistant Essex County Prosecutor. He underwent surgery at a New Brunswick hospital, the paper said, and is in critical but stable condition. The couple’s son, Daniel Anderl, died in the Sunday evening attack at the family’s North Brunswick home.

The suspect in the shooting remains at large. It is not currently clear what motive they had for attacking Salas’ home.

They give the judge Esther Salas the Deutsche Bank/Epstein case on July 15th & now someone is breaking into her house w/ a FedEx uniform, killing her son & putting her husband in critical condition. Maybe a coincidence. pic.twitter.com/7KdkBJ31X0

Judge Esther Salas was assigned this case in the District of New Jersey this past Wednesday - now her son is dead and her husband shot. pic.twitter.com/YvQnnuYdPU

That is horrible. A nightmare scenario for your family.

The husband and son of federal Judge Esther Salas were shot by a man who showed up at their New Jersey door in a Fed-Ex uniform, according to New Jersey Globe.

Daniel Anderl, 20, the judge’s son is dead, the news site reported. Her husband, Mark Anderl, is in critical condition, and the judge is not injured because she was in the basement at the time of the shooting, NBC New York reported.

News 4 New York reported that the gunman showed up at the judge’s home in North Brunswick around 5 p.m. on Sunday, July 19.

The television station reported that the judge’s husband answered the door and was shot “multiple times.” The son came to see what was going on and was also shot. According to the television station, the judge is the first Latina woman to serve on New Jersey’s federal bench. Rutgers University called her “The first Hispanic to serve as a US Magistrate Judge for NJ.”

The motive and suspect are not yet clear.

Here’s what you need to know:

The judge’s husband is Mark Anderl, 63, a criminal defense attorney. Anderl is a lawyer with the New Jersey law firm of Anderl & Oakley, P.C.

His website biography says that Anderl practices in the areas of “State and Federal Criminal Defense Juvenile Delinquency DWI/Municipal Court.” He received his education from Brooklyn Law School and Northeastern University and was admitted to the New Jersey bar in 1985.

“Certified by the Supreme Court of New Jersey as a Criminal Trial Attorney, 1997 to present Over 250 Criminal Jury Trials Anderl & Oakley, P.C., partner, 1997 to present,” his website says. Before that, he worked as an assistant prosecutor for 10 years in the Essex County Prosecutor’s Office.

He has received numerous awards, including Middlesex County Bar Association Practitioner of the Year and New York top-rated lawyers.

2. Salas Is a Former Public Defender Nominated to the Federal Bench by Barack Obama & Was Recently Given a Case With a Link to Jeffrey Epstein

According to The New Jersey Globe, Salas is “a widely respected and popular jurist” who was nominated by President Barack Obama to be a federal judge in 2010 after serving as a public defender and federal magistrate.

The judge was recently assigned a case with a Jeffrey Epstein link.

According to Bloomberg, Deutsche Bank AG is being accused of misleading investors “about anti-money-laundering deficiencies,” including not properly monitoring high-risk customers, among them the financier Jeffrey Epstein, who died in a Manhattan jail cell while awaiting sex offense charges. Epstein’s ties to high-profile figures like Prince Andrew and the manner in which he died have caused some to question whether his death was murder instead of suicide. Authorities have given no indication that the motive for the Anderl shootings is tied into any of the judge’s cases, however.

According to NJ Monthly, she has said one of her “proudest accomplishments” was creating a Pretrial Opportunity Program with another judge. It’s an jail alternative program for drug addicts. The story says Salas would “sit down for frank conversations with defendants,” adding that she “lives and breathes her work.”

3. The Judge’s Son Was a Baseball Prospect

Daniel Anderl is listed by Perfect Game.org as a 2018 graduate of North Brunswick, New Jersey. He was listed as uncommitted. He attended St. Joseph high school and stood 5 foot 10 inches tall and weighed 150 pounds. Team last played for was listed as “baseball warehouse.”

She once told New Jersey Monthly, when her son was 17, that she could see him pursuing a legal career.

“I don’t want to dissuade him, but I was pulling for a doctor,” Salas told the publication. “He’s been arguing with us since he could talk—practicing his advocacy skills.” The story said that Salas “teaches him her mother’s mantra: ‘Tu no eres mejor que nadie, pero nadie es mejor que tu.’ It means you are not better than anyone, but no one is better than you.”

4. Salas Is the Child of Cuban & Mexican Parents

According to Best of NJ, Esther Salas was born on December 29, 1968, in Monterey Park, California to a Cuban mother and a Mexican father.

She was largely raised by a single mother, the youngest of five children, the site reported, describing her as “a bright child” who “helped her mother negotiate at the welfare office to ensure her family wasn’t snubbed or ignored.”

5. The Judge Met Her Husband When He Was a Prosecutor & She Was a Legal Intern

Threats against federal judges numbered “4,449 threats and inappropriate communications,” CNN reported, adding that such threats have escalated in recent years.

There are about 2,700 federal judges in the country.

In 2005, a man upset that U.S. District Court Judge Joan Lefkow dismissed her lawsuit murdered her mother and husband in Illinois.

From 1979 to April 2020, only three federal judges had been murdered in the United States: Judge John Wood, Judge Richard Daronco and Judge Robert Vance, according to CNN.

According to New Jersey Monthly, Salas met her husband when he was working as a prosecutor and she was working as a law school intern. He spotted her “getting fingerprinted” and came over to talk to her, she told the publication, adding, “We’ve been inseparable since 1992.”

This Epstein shit obviously has the potential to destroy very powerful people. But I’m amazed at how open and obvious they are being about covering it up or killing anyone involved. Turning into a movie.

Will be lots of apprehended bias applications

Tell us more about the Russian Mafia connection

Maybe it had nothing to do with her being a judge. Could be that her husband fucked up in his defense of somebody who he shouldn't have fucked up on in court. I'm probably wrong but it's not out of line to consider it.

Nah, I'm wrong. They definitely would have put another one in his head for good measure if that was the case.

Tell us more about the Russian Mafia connection


NoNeed4aScreenName is your man for this

This Epstein shit obviously has the potential to destroy very powerful people. But I’m amazed at how open and obvious they are being about covering it up or killing anyone involved. Turning into a movie.

Its been a movie.

Her son played baseball so he could be the target.

Being a criminal defense attorney (which he is now) can also piss off people who might blame him for them going away.