Fuckin hell! Alex texts this guy on short notice “change of plans, we’re going free soloing” and this Norwegian guy Magnus sends it with him. Magnus had never free soloed a route before. Alex is absolutely fearless. Mega props to Magnus. My palms were sweating just watching this. 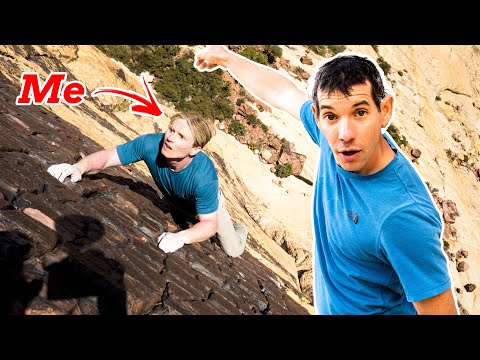 I’m getting towards the end and my heart is in my throat. Holy fuck this is nerve wracking. One little slip and you’d be a dead man in a very brutal fall. Fucking hell how do they do this. Alex is completely out of his mind. His brain is definitely wired differently.

So…who do you normally climb with here?

AH - Here? Most climbing I do by myself anymore. I don’t really have any go to partners anymore. They’re all dead or married with kids.

That guy is just on another level. I remember watching Free Solo, and that was crazy.

Even though this climb is a walk in the park for him it seems, it definitely made my butthole pucker

I watched this the other day. Clearly knew Magnus was gonna be fine but still was nervous watching.

Also Magnus is a world class climber and the best climber in Norway, or at least was when he competed. Alex knew he could handle it but watching Magnus have to mentally get over the risk of death was interesting to watch. His YouTube channel is pretty good if you’re interested in bouldering.

Cool video, thanks for posting it

If you guys enjoyed ‘Free Solo’ Id recommend ‘The Alpinist’…follows another crazy guy named Marc Andre Leclerc…I watched it on Netflix, dunno if its still on there or not.

I watched Feee Solo while flying over the Atlantic.

Not sure if watching that hurt or helped lol.

Lol that video is awesome. I love that they were just calmly having a conversation while risking death.

He’s amazing, but he’s also totally strange and off his rocker.

I bet @theraskal loves him some Alex Honnold