Hall of Famer Filippo dies at 83

Hall of Famer Filippo dies at 83


Lou Filippo, a California referee and judge for more than 30 years and a World Boxing Hall of Famer, died Monday in Los Angeles. He was 83. Before becoming one of the top ring officials and refereeing and judging dozens of world championship bouts, Filippo boxed professionally as a lightweight from 1947 to 1957, exclusively in Southern California. The World War II veteran compiled a professional record of 23-9-3 with 8 KOs. He finished his career with a pair of fights against Hall of Famer and former lightweight champion Carlos Ortiz, a nine-round no-decision followed by a seventh-round knockout loss. Filippo began refereeing and judging in the mid-1970s, working primarily in Southern California. But he was also associated with the WBC, which held a moment of silence and a 10-bell count in Filippo's honor during its annual convention, taking place this week in Jeju, South Korea. Perhaps Filippo's most famous judging assignment came in 1987, when he served on the panel for the controversial Sugar Ray Leonard-Marvelous Marvin Hagler middleweight championship fight in Las Vegas. Boxing fans argue to this day about who deserved to win the fight, although Leonard was awarded a split decision victory. It was Filippo who scored the fight for Hagler, 115-113. Filippo had many other high-profile judging assignments, including in the first Shane Mosley-Oscar De La Hoya welterweight championship fight in 2000 in Los Angeles. Filippo's presence in the ring led to numerous television and film appearance, including parts as a referee in five of the "Rocky" films. Dan Rafael is the boxing writer for ESPN.com.

Damn, no love for a boxing hall of famer?

JerseyCityMMA - RIP..he was on all of the Rocky movies I believe

Yes, that was him!  He got a front row seat to some bad boxing (in the movie) but awesome brawls! 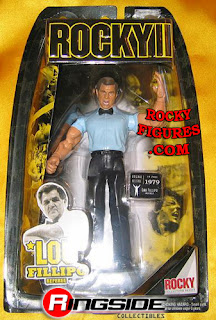 I wish that I had a better picture of Lou from the Rocky movies.