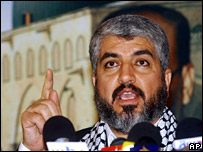 An interview with Khaled Meshaal

RR: But the two-state theory which the Americans are promoting envisages a Palestinian state next to an Israeli state. Is this also absolutely unacceptable for Hamas?

Even when President Bush talked about a Palestinian state, it was not clear cut. And Ariel Sharon and recently Ehud Olmert have made a lot of reservations about Bush's proposal. They are rejecting the idea of an Israeli state within its 1967 borders. They want an Israeli state, which includes parts of the West Bank. Actually, President Bush had even agreed to Sharon's proposal for Israel to keep all of Jerusalem. And he agreed with Sharon to choose the right Palestinian leader who would accept all this.

RR: Have I understood you correctly that you would be prepared to negotiate with Israel and accept it within its borders of 1967, before it started its wars of aggression, stealing Palestinian land?

KM: Good, that has been made clear.

RR: In the West, Hamas is generally depicted as being absolutely against talks with Israel and [it's believed] that Hamas only wants to drive the Israeli Jews into the sea.

KM: This is not correct. Killing Jews is not our aim. For centuries we have lived in Palestine peacefully with Jews and Christians of all kinds. We are fighting Israel because it occupies our land and oppresses our people. We are fighting Israel to finish this occupation. We want to live freely on our land just as other nations. We want to have our own country just like other people. But the Zionist movement came from all over the world to occupy our land. And the real owner of the land has been kicked out. This is the root of the problem.

Because of many factors, we now accept to build a Palestinian state within the borders of 1967. But that doesn't mean that we recognize Israel. But we are prepared to make a long-term truce with Israel. Accepting the status of Israel without recognizing it.

RR: But no recognition? Doesn't that mean continued tensions and war?

KM: No. There are plenty of examples where no recognition does not mean war. China and Taiwan, for example, have not recognized each other, but they trade and cooperate with each other. By withholding a formal recognition, we just don't want to give Israel the legitimacy for having taken our land in the first place.

RR: The West is reproaching you that in this fight against Israel you are committing acts of terrorism.

and Arafat accepted the Camp David Accord conditions. Yaay!

why don't you just say neocon and leave it at that?

Impose the '67 borders. Bring the world some much needed peace

If Israel doesn't like giving up some illegal settlements, to bad, start paying your own bills then you have a say.

I usually wait for some dipshit to post neocon before I parody it. lol.

you don't wait, you post without reading or thinking, there's no discussing shit with you

in other words your mind is already made up

The problem is that you never address anything I say, you just puch forward with babble. Ive presented very in depth responses to people on this board who are receptive (and capable) to discussion. I dont believe that you are. Not for a second. Sorry bout your luck there, turbo.

Regarding this article, my comment reflects my skepticism, as we have seen Palestine, or even Hamas 'accept' conditions in the past and not honor them. IIRC, the '67 borders were offered (by Barak) on a prior occasion. Palestine is not interested in peace.

dude enough, you're too much

just make your little neocon comments and move on, don't pollute this thread any more with your garbage

come on hubris...you know this isnt for real... Their whole culture is based on killing jews.

"Accepting the status of Israel without recognizing it."

Let me paraphrase for you Hubris:

"just make your little neocon comments and move on, don't pollute this thread any more with your opinions based on previous and repetative behavior of the Palestinians"

lol @ their whole culture being based on killing jews...damn that is so out there it is funny

"Accepting the status of Israel without recognizing it."

OTTAWA (AFP) - Canada will not hold talks with "genocidal" groups Hamas and Hezbollah to try to secure Mideast peace, Prime Minister Stephen Harper said in an interview with broadcaster CTV, to be aired Saturday. "We will not solve the Palestinian-Israeli problem, as difficult as that is, through organizations that advocate violence and advocate wiping Israel off the face of the Earth," Harper said. "It's unfortunate because with Hamas, and with Hezbollah in Lebanon, it has made it very difficult to have dialogue -- and dialogue is ultimately necessary to have peace in the long term -- but we are not going to sit down with people whose objectives are ultimately genocidal." "I think all of the civilized world is agreed -- and it's not just Canada -- we can't deal with organizations whose principle and only objective is terrorism and the eradication of the other side."

Its the damn common sense agenda. Itll be the end of us all!! * waits for Harper/Hitler comparison *

so tell me what their doctrine is hubris.

We love jews? Come on man, wake the fuck up. They hate everyone besides themselves. Just look at the state of that coutnry politically.