It’s too bad Rogan never got roped in to that celebrity boxing fad, we could have seen him fight screech or Danny Bonaduce

While I don’t think Schaub is funny I think it’s even weirder how adults gather around and enjoy his downfall.

It’s too bad Rogan never got roped in to that celebrity boxing fad, we could have seen him fight screech or Danny Bonaduce

At one time there were serious talks about Rogan fighting Weasley Snipes.

2ufc employees would stick up for Rogan, he has to mix his knowledge of the game with marketing the fighters the ufc wants, I think the Rousy comments kissing her ass was encouraged by the ufc, Tony Ferguson says in multiple interviews how he dislikes Rogans commentary for being biased bcs they aren’t friendly in real life, that could effect things as well

At one time there were serious talks about Rogan fighting Weasley Snipes.

Weasley Snipes, lol. The taxman give him that nickname? Normally I’d say Joe easily kicks his Blade karate man ass, but Snipes is hardened by time in the joint now. He might have the edge in that raw brutality you only get from being in a cage. A real iron bar cage, not some chain link fence bullshit “cage” for sport.

This thread has gone off the rails. Let’s get back to the topic. Yeah, Joe gets caught up with the bandwagon hype of a fighter here and there and gets a little carried away cheerleading them sometimes and it is a bit annoying, but I can’t remember him being that derogatory about any fighter to where it should piss them off.

Fighters are sensitive. I remember Gaethje getting all pissy with Schaub because he said something like he “throws caution to the wind”. Took it as he was saying he’s reckless with no technique. He probably got insecure mad because that’s kind of true.

Rogan has ridden some fighters dicks before where he basically ignores the other guys offence. It was worse in the earlier UFCs I remember a really egregious Phil Baroni fight where he was almost rivalling Frankie Edgar’s wife for relentless cheerleading. I’m pretty sure it was the Pete Sell fight

Rampage was pissed that he wouldn’t let up on his criticism of him not throwing leg kicks, not checking them I could get because he was lazy with that, but his problem at the time was getting wrestled by guys, I don’t think leg kicks were going to help keep him off his back. He did basically become a one dimensional boxer in the UFC though, he mixed it up a lot more and had really good ground and pound in Pride

Jesus christ that is so accurate.

Every time I hear comics going on about their “art” and the whole “free speech warrior philospher poet” thing it’s invariably an LA comic talking on a podcast.

Every time I hear comics going on about their “art”

It’s a performance art. In most cases it’s a scripted one man stage show with room to improvise.

Izzy vs Jan was some of the most biased commentary I’ve heard in MMA.

Joe ignored the beating Jan was dishing out and lost his mind every time Izzy threw a feint. If he gushed over one feint I would understand but Joe was calling out every feint like they were head kicks that were landing.

I’m surprised he even picked up on the feints. 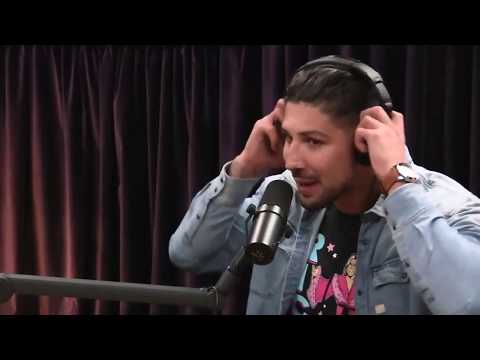 To me, this was the Schaub moment that really made me laugh. Callen’s face and wanting to get the fuck out of there really made this.

To me, this was the Schaub moment that really made me laugh. Callen’s face and wanting to get the fuck out of there really made this. 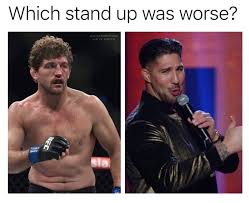