St. Louis is famous for its tours, which take you directly to the tomb of Voodoo Queen Marie Laveau. It is said that her spirit haunts the graveyard and that she continues to help those who dare knock on her tomb.

If you’ve never witnessed a poltergeist and you want to then you need to go see Greyfriars’ poltergeist of Sir George Mackenzie. According to visitors and tour guides, the poltergeist is capable of physically attacking people. There are tours which take people to the site where the poltergeist resides.

Stull Cemetery is also called The Gates of Hell because it’s believed to be one of the many entrances to the netherworld. It is also believed that the whole graveyard is filled with evil forces, especially near the church.

This cemetery is not only known for having the tombstones of Charles Dickens and Karl Marx, but it’s also famous for being haunted by the Highgate Vampire. According to urban legend, the Highgate Vampire is a 7-foot-tall phantom that has attacked people since 1960.

Not only is this the place where Edgar Allan Poe is buried, but this is also the place where the Skull of Cambridge is buried. It’s believed that the skull once belonged to a minister who was murdered. His skull was placed in a segment of cement to stop the screams that were apparently coming out of the tomb. According to visitors, the screams are still audible and they apparently linger in their heads for some time.

La Recolecta is known to be haunted by a young girl, Rufina Cambaceres. Rufina was buried alive after she was mistakenly pronounced dead. Once her body was found trying to escape her tomb, her father redesigned her tomb to resemble his daughter trying to escape it. It’s now believed that Rufina haunts the place and goes around digging up other graves in order to make sure that no one is buried alive.

It is believed by locals that Howard Street Cemetery is haunted by the ghost of Giles Corey. He was a farmer who was accused of being a warlock during the Salem witch trials. It’s said that Corey’s ghost is seen around town before or after something tragic happens.

Valley of the Kings — Luxor, Egypt

The Valley of the Kings is believed to be haunted by multiple pharaohs, including King Tut. It’s said that when excavators open a new tomb they release the spirit of whoever was in it. Paranormal sightings that have been reported by watch guards include the ghost of Akhenaten and a pharaoh on a chariot being pulled by black horses.

Resurrection Cemetery is claimed to be home of the famous ghost Resurrection Mary or Bloody Marry, depending on who you ask. According to locals, Mary’s ghost is a young girl with blonde hair and blue eyes, wearing a white dress. She’s been seen hitchhiking near the cemetery. Other say that she’s been spotted dancing around the cemetery.

Gettysburg is known to be one of the most haunted places after the battle of Gettysburg in 1863. Visitors have claimed to experience phantom smells and apparitions of ghosts warning people to leave.

According to Terry Ike Clanton, this cemetery is haunted by a ghost who’s wielding a knife. Clanton was trying to take a black and white picture at the cemetery, and when he developed his pictures he realized there was a mysterious man behind him. He said that no one was behind him at the time the photo was taken.

Among the many ghosts that haunt Glasnevin Cemetery, there is the ghost of a dog who’s often seen visiting the tomb of his old master. The dog starved to death after refusing to leave the tomb of Captain John McNeill Boyd.

If you know why without looking it up..... I love you. 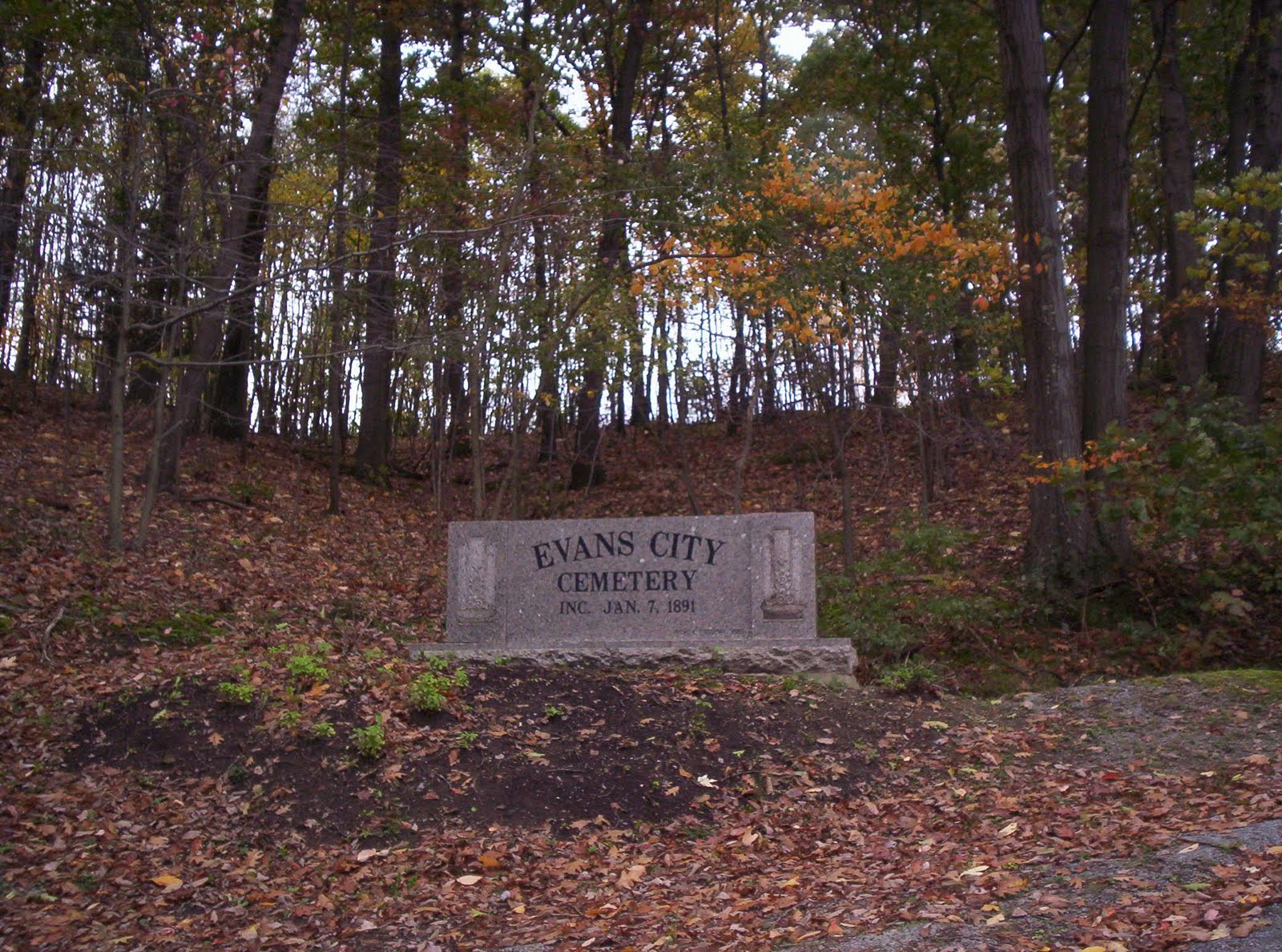 I went to Bonaventure in Savannah Georgia, one of the most eerily beautiful places I have ever seen.

holy shit! that is fuckin creepy...

If you know why without looking it up..... I love you.

I'll prolly have nightmares tonight now cause i'm gonna have to watch it again.. Thanks! :)

Boneventure is a gorgeous place to visit. Gracie Watson's grave is f'n creepy though. 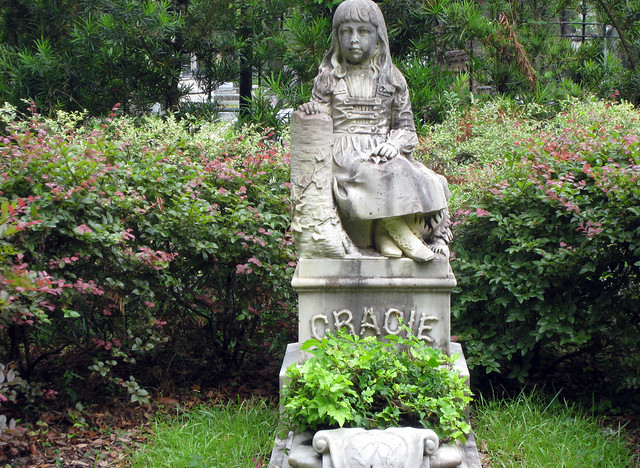 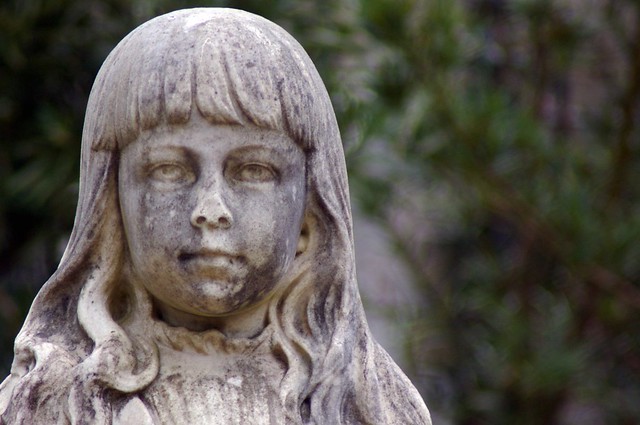 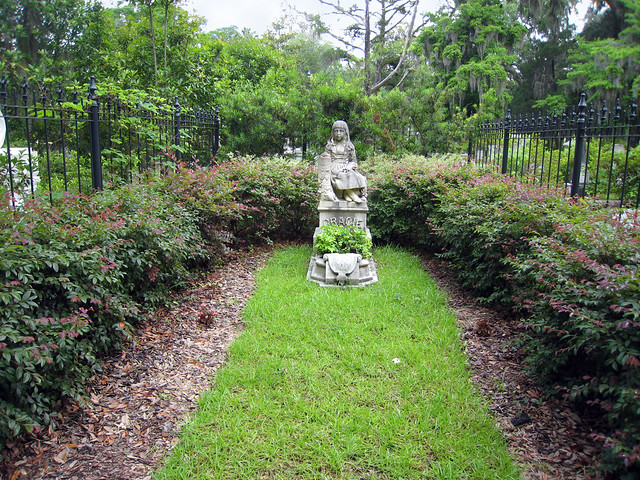 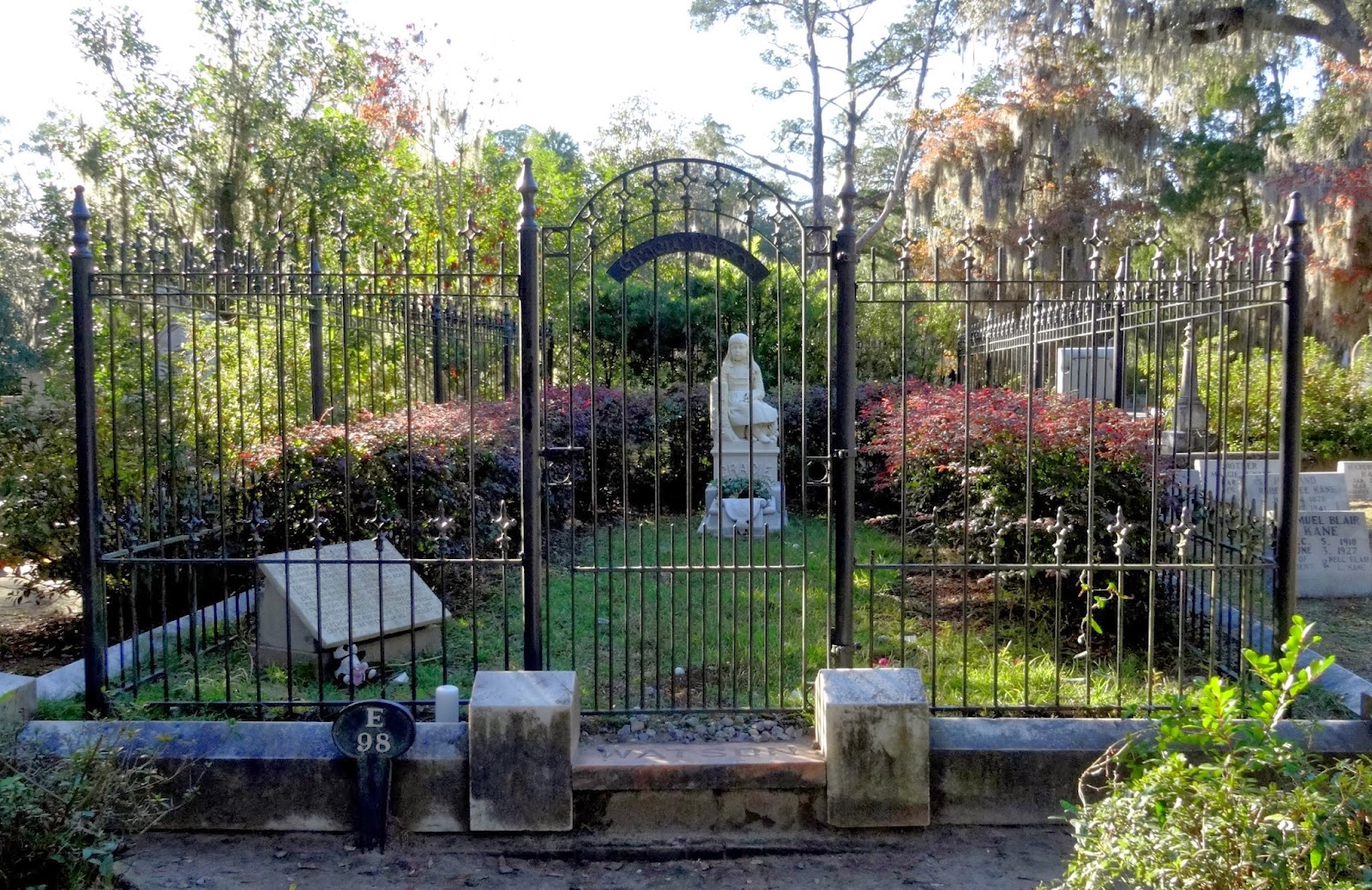 Behind every photograph, there is a story.

In 1993, Savannah Georgia photographer Jack Leigh was hired to photograph an image for the cover of John Berendt’s book, “Midnight in the Garden of Good and Evil.”  Leigh’s photograph of the now famous “Bird Girl” statue became an immediate publishing sensation and put Bonaventure Cemetery on the map.  Soon people began flocking to Bonaventure Cemetery to see the sculpture. Due to concerns about the amount of traffic at the grave site, it was removed from the cemetery and relocated. Supposedly, Leigh spent ten hours in the darkroom dodging and burning the photograph to impart a moonlit feel while accentuating the halo around the statue’s head.  Leigh died in 2004 and was buried at Bonaventure, which I find poetic.

Bonaventure has a strong reputation as being one of the most haunted locations in the United States.  Unquestionably, I felt a strong spiritual vibe and energy as I leisurely walked around the cemetery grounds looking at the various historic gravestones in search of a suitable photographic subject.  While I was disappointed that the “Bird Girl” statue had been removed, I happened upon a gravestone statue that I felt was equally as powerful, if not more so.  Her name was Gracie Watson.  And I was moved to be in her presence.  Maybe it was because she was the only child buried in this hauntingly beautiful cemetery?**   Or maybe it was the tragic quality of her life and death and the fact that I have a young daughter of similar age?

The inscription on her gravestone reads, “Little Gracie Watson was born in 1883, the only child of her parents. Her father was manager of the Pulaski House, one of Savannah’s leading hotels, where the beautiful and charming little girl was a favorite with the guests. Two days before Easter, in April 1889, Gracie died of pneumonia at the age of six. In 1890, when the rising sculptor, John Walz, moved to Savannah, he carved from a photograph this life-sized, delicately detailed marble statue, which for almost a century has captured the interest of all passersby.”

According to local folklore and legend, Little Gracie Watson is among the most haunted spirits residing at Bonaventure and in Savannah.  Visitors will leave toys for her to play with, and some claim she will cry tears of blood if her playthings are removed. There is always a collection of toys near her grave area, especially around Christmas, but no sign of tear stains running down her porcelain “doll-like” marble face.  There is also a belief that if you place a quarter in Gracie’s hand and encircle her statue three times, the coin will disappear.  Like the “Bird Girl” statue, little Gracie Watson has become very popular, and the grave is now fenced off in wrought-iron to prevent further damage.

Pulaski House Hotel was frequented by Savannah’s elite, and Little Gracie Watson often played the role as hostess at the various high society parties that were held by her mother.  Gracie quickly endeared herself to Savannah’s elite, and loved being the center of attention. When she became bored,  she would often retreat to play underneath the back stairwell of the hotel.   After her death in 1889, her mother and hotel staff claimed to be able to still hear little Gracie laughing and playing underneath that stairwell.  Although the hotel has since been torn down, the location of the original hotel still boast many haunted sightings.  The haunted echoes of Little Gracie can still be heard laughing and playing where the old staircase would have been located.  And some people even have reported seeing a small girl run past them in period dress.

To this day, my visit with Gracie is still strongly etched on my soul.  For hours and without any other interruptions other than the humming sound of a distant lawnmower in the background, Little Gracie and I bonded.  Like a father to his precious daughter, we shared many conversations and moments, and I shed tears for her.  While her beautiful young life was cut way too short, she left her mark in the physical world—and now leaves her tiny footprint in the spiritual one.  The world is a better place because of Little Gracie and I am honored to have met this young lady on this one particular and mostly uneventful quiet Spring day.

Awesome thread, thanks for posting. VTFU