Hooters Waitress survives in woods a month on METH

The former Hooters waitress who survived a month alone in the woods may have got lost because she was high on meth, police now say.

Student Lisa Theris was found wandering by a US motorway caked in mud and covered in scratches after spending nearly four weeks alone in the forest.

Now The Mail Online reports how police think she may have got lost because she was high on drugs.

Cops suspect she may have been suffering from hallucinations brought on by taking meth.

And bizarrely the two men she allegedly took drugs with were so sure the 25-year-old was dead they started accusing each other of her murder.

Manly Davis, 31, and Randy Oswald, 36 – who were arrested after allegedly breaking into a hunting lodge in Midway, are understood to have been quizzed over her disappearance.

It was earlier alleged that Lisa was with the men but did not want to be part of the robbery and ran into the forest to escape.

Reports also claim she emerged just two days after criminal charges against her were dropped when she was presumed dead, according to the Daily Mail.

Pictures show her body covered in bug bites after the legally blind radiology student struggled through the forest completely naked.

Snaps show how her skin was left cracked from dehydration after she drank muddy water and squeezed the moisture from her hair to stay alive.

But it has since been revealed how she started taking drugs in the months before her disappearance.

Questions are now being asked of her miraculous survival.

Damn lol lucky bitch. Most survivalists would have trouble in that situation.

Time to add meth to my bug out bag. It helped a blind Hooters girl survive for a month, so it gets the seal of approval. 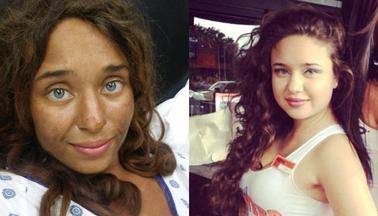 Looks like shes got at least 4 weeks of energy stored on her.

How can someone be a waitress if they're blind? This makes no god damn sense.

Where did she get a spray tan in the woods?

Is it me or does it look like there's 4 different people in the pictures?

BajiKimran - Where did she get a spray tan in the woods?

She turned into Mowgli.

Most charitable hooters hire ever

she did better than the into the wild guy.