How old is Ricardo De La Riva? I always thought he was an older guy, but I was just recently reminded that he competed in the 2002 Mundials and finished third in his weight class, losing only to eventual winner Fredson Paixo.

I thought he was really old school since he beat guys like Royler and Royce, so to compete and do so well as late as 2002 is remarkable. He doesn't look particularily young (or athletic for that matter) but I know he's amazingly technical. If he's well over 30, then props to him for competing with the best young sport bjj guys in the world and placing.

i think he told me he was a black belt when liborio was a bluebelt... (?)

He is either 40 or 41 currently. He was a black belt when Libo was a blue. Many of the Carlson team referred to DLR for technical advice, only to never mention his name in interviews, which is a real shame.

"You know that in our hearts, you are king!" --Renzo Gracie after the 2002 Mundial in an interview for Gracie Magazine.

DLR is one of the few that seems immune to the BS BJJ politics.

What's even crazier is that he only prepared for the match with 2 weeks notice. My old instructor (De La Riva BB) and others in the school told him it wasn't enough time to prepare, but he was getting a good deal of sponsorship cash from it and they wanted it filmed for his documentary -

There is another De La Riva BB who is over 40 who competed in Mundials and lost to Xande in their weight division. There was a big applause due to the fact that the guy refuses to compete in the Masters tournament, opting to compete against the best in the world.

Wow, De La Riva is the man. Does anyone know how many matches he had before facing Fredson? I'm assuming it's a lot since that weight class is usually stacked.

He is 41 years old and he told me that he will compete next year again, but this time in the senior division.

His match vs. Renzo was very close. Renzo won, but if I remember right, DLR had him in an omoplata for a while. DLR is a legend for his incredible knowledge and innovations.

wow, what are the chances that a guard style would have the same name...weird...

De La Riva has phenomenal BJJ. If you ever get to go to one of his seminars, they are great. It's awesome to watch him roll and hardly use any strength and still whoop everyone's ass.

De La Riva can't be judged by his appearance. He looks totally harmless, looks like he can maybe bench 150 pounds, and kinda geeky too. lol

It's good to see him get props on this forum.

One of the nicest people Ive met, in bjj or elsewhere.

Interesting note - he told me that Liborio introduced him to his wife.

when does his documentary come out? 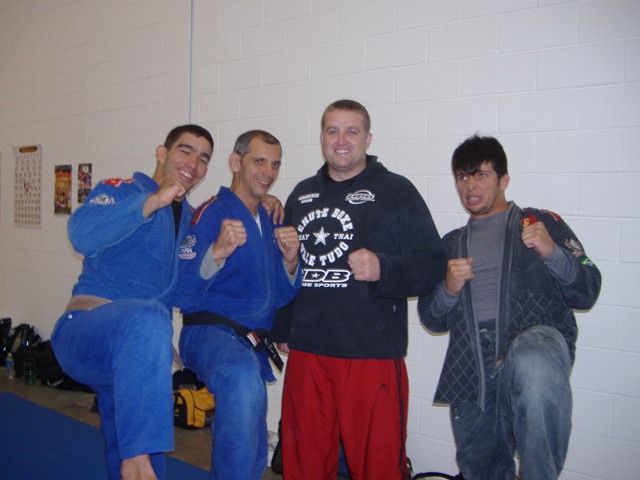 I was the first person in the UK to ever roll with De La Riva I am truly honoured!, I found his style really odd kinda like I couldent feel anything, and it goes to reason that if I cannot feel anything how can I stop it?. awsome!