How would you describe your dad?

A hippie, A single dad pioneer. not a great provider but tried in his way. Gone way too soon, (thought I had 10 more years to fix the void, didnt and regret that) Funny motherfucker. found in his drawer at the end, a bag of weed, a gram of coke and some Drum tobacco.

Willy pickton is one of Canada’s most prolific serial killers.

I read this and had to spend a minute, since I remembered a Robert Pickton but not a Willy Pickton.

Sure enough, they’re the same person and I’m just dumb 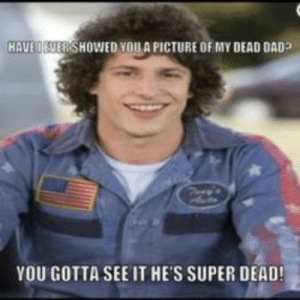 All good - conservative folk are not devils but you know this…

Yup, I do know

Was this right after he told you he was going out real quick for a pack of smokes?

lol if he didn’t have COPD he would still be smoking three packs per day.

Sorry bro and having two dads I’ve been there twice. Never a good outcome.

He’s awesome and he has cancer

An abusive, drug addict piece of shit! The world is a better place without him!

Thanks, I really appreciate it. My other dad has been a rock through it all

The worlds biggest gentleman. Someone who ever man should strive to be like. My best friend.

My dad is a very intelligent person, far more than I am. He has an incredible work ethic. Neither he nor my mother were ever very supportive. The two of them watched the documentary style prison shows religiously. They would go through my room and my things every time I left the house.

He worked 5 and 6 days a week at Honda. When he came home from work, you didn’t do anything loud and you didn’t bug him. There are several times from when I was a kid that I have fond memories of but there wasn’t any playing ball with my dad or anything of the sort. I do remember that he taught me to ride a bike as a kid.

He went out of his way to support my mother in her psychotic shit. I never once heard him tell her no or to stop doing what she was doing. As time went on and I grew up, we didn’t have anything to talk about. This is the case with the rest of my relatives as well.

My parents were so worried about me being a drug addict to spite the fact that I never showed any interest in drugs outside of their effects on history. However, my mother died an addict that couldn’t quit the Xanax, opiates or ambien.

Since she died, my dad has been much more verbally and physically affectionate, giving me a hug or telling me how proud of me he is and how much he loves me. For whatever reason, I can’t seem to accept it or return those feelings with sincerity.