HuffPo: Why Black People Own Guns

Why Black People Own Guns

HuffPost spoke with 11 black gun owners to figure out what gun ownership means in a country determined to keep its black populace unarmed.

As much as America loves her guns, she has never liked the idea of seeing them in black hands.

Before the Revolutionary War, colonial Virginia passed a law barring black people from owning firearms — an exercise in gun control as racial control. In 1857, in his notorious Dred Scott decision, Chief Justice Roger Taney summoned the specter of black people freely enjoying the right to “keep and carry arms wherever they went.” Surely, he argued, the founders were not “so forgetful or regardless of their own safety” to permit such a thing. When black people armed themselves against white supremacist attacks following the Civil War, Southern state governments passed “black codes” barring them from owning guns. After the Black Panthers open carried to signal to California police officers that they would defend themselves against racial attacks in the late ’60s, then-Gov. Ronald Reagan signed a state ban on open carry into law.

In 2016, legal gun owner Philando Castile was shot after informing a Minnesota police officer that he was armed. Two years prior, Tamir Rice was killed by Cleveland police while holding a toy gun. John Crawford suffered the same fate in a Beavercreek, Ohio, Walmart.

So what does black gun ownership mean in a country so determined to keep its black populace unarmed? Since the 2016 election, interest in firearms has supposedly ticked upward in the black community. Gun shops and clubs link the interest to a desire for self-protection against the white supremacists emboldened by President Donald Trump’s election.

HuffPost spoke to 11 black gun owners about their reasons for owning a firearm. Trump was a non-factor. Instead, they talked about wanting to protect themselves out of fear that no one else would. They talked about their anxieties during interactions with the police and their complex views on gun regulation. Where gun advocates often adduce the imaginary heroics of a hypothetical active-shooter scenario to their arguments, the black gun owners we talked to referred to specific incidents, specific provocations — as if redlined, too, out of the fantasyland of American gun culture. And most of them returned to a sentiment as old as the nation itself: that owning firearms is a rebellion against a system bent on keeping them out of the hands of black folks.

The interviews have been condensed and edited for length and clarity. 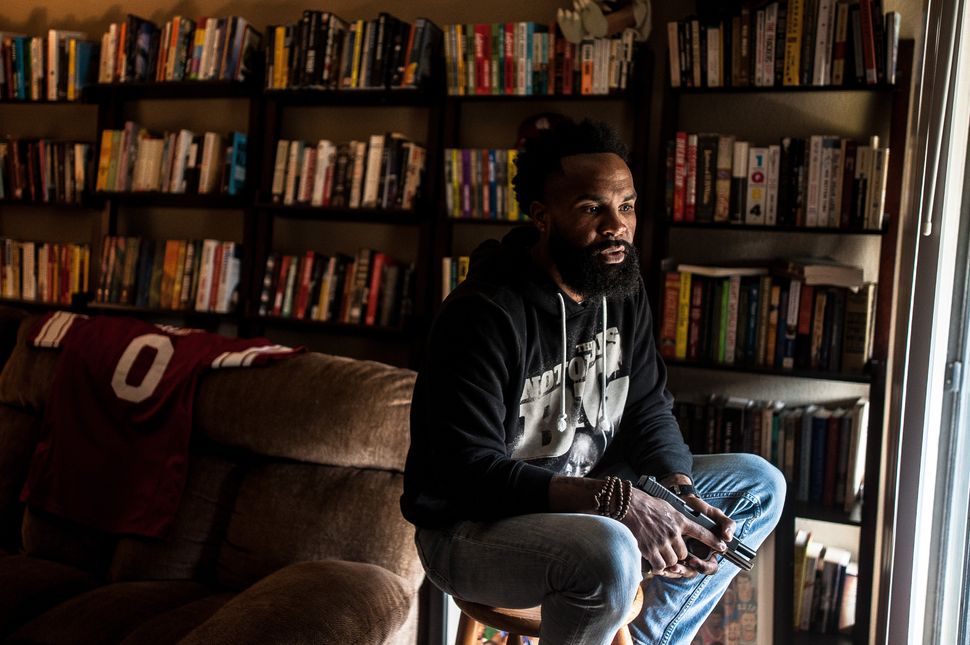 RJ Young, 30, Tulsa, Oklahoma Young, a Ph.D. student at Oklahoma State, is writing a book called Let It Bang about his experiences as a black gun owner. He owns a Glock 17 9 mm and a Glock 26, which is his concealed carry weapon.

The first gun I ever touched was placed in my hand by my ex-father-in-law as a gesture of goodwill and good faith. He’s an old white man, and I was, at the time, dating his daughter. When he handed me this thing -- which I would come to find out was a “harsh judge,”  or a revolver you can cross-load with shotgun shells -- I was very scared to touch and hold it. It looked enormous, kind of like a Flaming Scimitar.

He was smiling about it. I thought that this was really weird at the time, like a scary “Guess Who’s Coming to Dinner.” And I found out later from my girlfriend, who’d eventually become my wife, that this was him saying: “Hi, I’m Charles. I’m a nice guy.”

He had guns around the house, and it wasn’t a big deal. There was another shotgun leaned up against the door. I asked him about the gun in his little fanny pack he carried around, and he went on for about an hour about this pistol. And I figured that was my in. So over a few years I got to know him  through guns, and I got pretty good with them. I got a concealed carry license, and I ended up trying to figure out what it meant for me to have a gun as a black man. I slowly learned that we weren’t always allowed to have firearms. They were kept from us for a number of different reasons, but not the least of which is white folks feared violence from black people -- in particular black men. And I had this question in my head about whether or not I was safer if I had a gun knowing what had happened to Trayvon Martin and Walter Scott.

In the course of becoming an expert with a pistol, so much so the NRA certified me as a pistol instructor, I’ve come to find out that I’m not safer. In fact, I’m probably more likely to have harm done to me if I have a firearm on me because a cop stopping me is not the same as a cop stopping a white person. And I have a duty to inform any officer who stops me that I am carrying and that I have a permit for it. But how they react to that, I can’t say. And that scares me. So I would rather not have a firearm on me and give someone a reason, even in their minds, to shoot.

I believe in the right to carry a gun, so I own them, and they stay locked up. The ammunition stays in one room, and the firearm stays in the other. I go shoot from time to time to keep my skills and to keep my credentials, but I don’t carry one in public. For them to be for protection, they would have to be loaded. Even if I wanted to go get them from a closet, I don’t keep them loaded. I keep the slide lock open and a key lock through them. They’re paperweights in my house. If somebody broke into my place, either I’m going to let them do what they need to do and leave or I’m going to try to handle it with my hands.

But if they shoot me or I shoot them, then nothing gets resolved. I’m just a cowboy who shot an outlaw. If that person is subdued or if I knock that person unconscious with one of the candle holders I keep around, and then that person is handcuffed and we go through this system of justice that we put into place; I feel much better about that. I don’t believe breaking into my house means that you need to die.

If I looked like Thor, I’d probably feel better about carrying a gun because the stigma is — I mean, I’m not just a black man. I’m a fit black man with, you know, 15 tattoos, sponge-brush hair and beard, and Malcolm X glasses, and I wear Jordans all the time.

If I could walk around Oklahoma and not count how many black folks were in the room, I’d probably feel better about firearms as a black man. I’d probably feel safer walking around with one. But the fact is, most people have a narrow view of who I am. I don’t get to wave my credentials in front of me and say, “Hey, master’s degree! Hey, Ph.D. student!” People have to take me as what they see, and they will immediately form an opinion about me. And most people who are white will have a bad opinion of me. That’s how I think this fits into my blackness. I can’t view myself as just a gun owner. I have to view myself as a black gun owner.

“When you live in certain environments, you’re preconditioned to paranoia.”

I’ve lived in the inner city for years, and I’ve been a gun owner for over five years now. I don’t see anything wrong with it, to be honest. I was born and raised in Detroit, Michigan. Sometimes I think we have post-traumatic stress. But we don’t know about these conditions that we live in. We just think this is the norm, and the norm is, you have to protect yourself before anyone else tries to harm you or rob you. You have that preconceived notion. You may not see it, but you’re living there. You know what goes on. You just have to protect yourself, pretty much, because everyone else probably has a gun.

My father was a gun collector, so he had Smith & Wessons. I was about 7 years old, and I had a stepfather who always had a gun in the home. And we knew not to touch it growing up. I got a little bit older, and my older brother had guns for protection because he was living not such a good life. Eventually, he ended up getting murdered in an act of gun violence. He was shot over 17 times.

If I’m going out any day or at night, I always carry it. If I’m coming in my house, I always have it out ready to walk into my home. You know, it’s just day to day.

I feel as though I’m more vulnerable than others. I’m an easy target. I feel like a lot of things do happen to females. I live alone so it’s just -- yeah, I’m an easy target, really. People watch you come and go, you know what I mean? And even though I’m 5’11”, that doesn’t mean anything. If people wanna target you, they’re going to watch your activities, who’s coming in and out of your home. Anybody could follow you. When you live in certain environments, you’re preconditioned to paranoia. It’s behaviors you don’t even know really exist. Even if I’m in a good neighborhood, I still have some of the same worries, though I’m probably not as alert as I am in other areas. For the most part, I’m watching my surroundings all the time.

Gang life and crack have nothing to do with it most definitey.

What a trip into the warped psyche of these paranoid individuals.  Conditioned to be that way I suppose.

Did they interview Colion Noir?

Fucking lol @ asking 11 people to get input on the country


I sure hope someone explains to him that Zimmerman was the victim of a violent assault and having his gun may have saved his life.

OP is on fire today

Who is trying to keep guns from law abiding black people?

Who is trying to keep guns from law abiding black people?

The politicians that are supported by the dirtbags that wrote the article (along with every other law abiding person).
gregbrady December 27, 2017, 8:55pm #17

' in a country determined to keep its black populace unarmed.'

what absolutely horrifying self obsession and narcisism disguised as racial awareness...me me me, my jordans, my black hairstyle, my victimhood, did i mention im black oh by the way im black Im black Im black look at how black I am.

Get over yourself, you look and sound retarded with your jordans, baggy pants and malcolm x glasses.

' in a country determined to keep its black populace unarmed.'

Of course a huff post article on guns is going to be retarded but I do know black people who bought guns and then had an eye opening experience at the range. They were nervous to go but then found out how welcoming gun nuts are and made several good friends because of a shared interest.