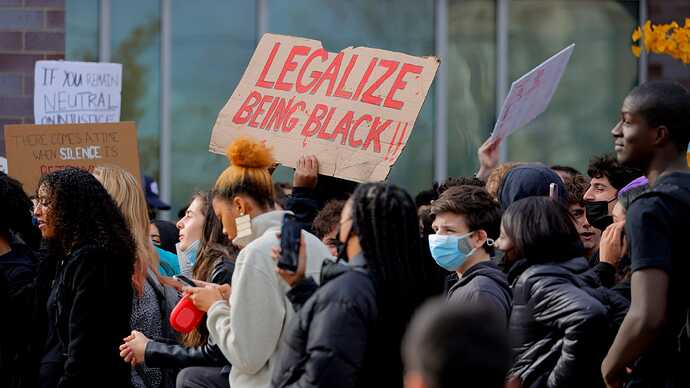 Hundreds of students walk out of Bloomfield Hills High to protest pattern of...

Hundreds of students made their way out of Bloomfield Hills High School during class time Friday afternoon, to protest a pattern of racism.

Lily Altavena, Detroit Free Press
Fri, November 12, 2021, 4:58 PM
Hundreds of students made their way out of Bloomfield Hills High School during class time on Friday afternoon, standing shoulder-to-shoulder at the school’s entrance to protest what they call a pattern of racist actions by classmates.

Many students wore all black as a part of the peaceful demonstration. A group of parents stood watching on the fringe.

The students were protesting what they’ve described as a series of racist incidents: Threatening graffiti using the n-word showing up on a wall, and Snapchat posts depicting the KKK and white students using the n-word to refer to their black peers. The perpetrators have not been adequately punished, students said.

I know how this one ends…. Leader of the walkout is the graffiti artist.

I’m sure that’s exactly what happened.

There’s no slippery slope to go down there.

I’m sure that’s exactly what happened.

Hundreds of high school kids are protesting being called bad words. What a bunch of pussies …

This generation has different standards than ours. No matter how much we complain its not going to change and soon they will be the majority

Hundreds of hs kids got out of class

edit - ok this was a different story, i dont know anything about the story in OP

is this the same place that some kids recorded themselves saying the N word then some other kid sent it to black kids at their school? then the black kids stomped on the kid that sent it?

How many black students does the school have? Any?

If I had to guess, the person(s) doing graffiti and other shit are the ones looking for the most amount of credit and attention for the “walk out”.

We would have protested anything to get out of class if we thought we could get away with it.

Oh it certainly does. It’s a wealthy area but very mixed