probably no heartier Canadians then the maratimers
they will be ok

Agreed, they are hearty as fuck when it comes to extreme weather and major storms… but when forecasters are predicting an historic weather event unlike any previous storms to hit the east coast, you can be hearty as all fuck, but it won’t stop the devastation from occurring, and the major headaches to follow.

I can only imagine the anxiousness people are feeling right now, from the farmers, seniors care workers, hospitals, and emergency services providers… the mess and the power outages on top of the damage… it has got to be unnerving during this calm before the storm period they are in right now.

Good luck with it all. Easy on the gummies, you may need your energy… even to be out there helping neighbour pulling trees off of cars and shit in the days coming. Keep us posted.

Not sure. I think they’re all fucked!

Lol… I sound like Mr. Doomandgloom, but I think this is gonna be a spectacular event.

I think the worst of it is over. I looked out the window and it looks like somebody dropped a salad bowl but everything still pretty much in place. Me and my daughter slept like babies.

Oh, the electricity went out about 10:00 pm. But that was expected. Might be a long couple days…

Is that Hal Tucker’s son?

That good news. Are you sure you’re not in the eye of the hurricane period? I was listening to cBC about an hour ago and they were saying that things had gotten calmer because the eye was passing over, and that it usually lasts about 45 minutes or so. I’m not sure where they were talking about though.

On the next 5 episodes of The Curse of Oak Island we say adze a lot to distract you from all the new chunks of wood in the swamp. 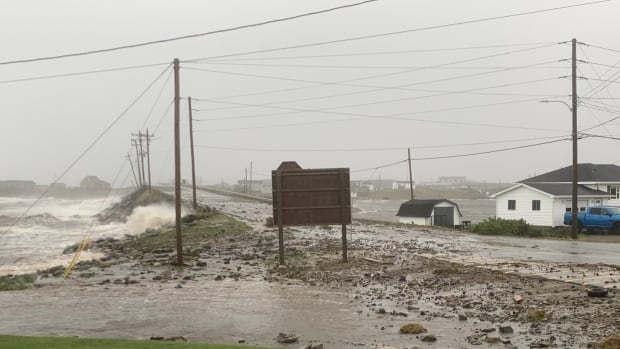 'Total devastation' as Port aux Basques declares state of emergency due to...

Some residents in Port aux Basques have been forced to flee their homes as the town is pounded by severe winds, storm surge and flooding due to Hurricane Fiona.

Where the blue building had been:

Fuuuuck. I’m in Halifax but I’m in a pretty good spot away from the water. There are trees all around my house which can be unnerving in a situation like this but they also shield us from a lot of the wind. I have a bunch of shit out on my deck that I didn’t even mess with and it’s all still roughly where it was. I have a yard ornament that’s a couple hundred pounds and I tied my daughter’s toy house and toys to it and it actually moved a few feet. Power still out.

Any news on Canada?

I know a fatass hot chick in halifax, hopefully she is ok

We just got the email that when the time comes our outfit will be sending any volunteers that want to go out there to help get their power back on.

There’ll be lots of us on the list. Probably too many and they’ll have to draw straws to see who goes. We still need to leave guys here to run our utility.

I drove around a little today and there is quite a bit of damage in areas and I saw whole trees ripped out of the ground.