I do the opposite. F the new bands. I tend to look up the bands/artists who influenced the ones I already enjoy. At this point half my playlists include Roy Acuff and the Dubliners.

Ahhh. Bauhaus must have stopped being Love & Rockets and switched back to Bauhaus. Power move!

I listen to lots of Spotify and let their AI make me a “release radar”. I find out about new stuff from that. I’ve been seeing European bands on short, small venue tours lately.

I’ve seen Sorry, Viagra Boys, and the Sleaford Mods in the past month. Fantastic shows.

Speaking of nyhc. This weekend: 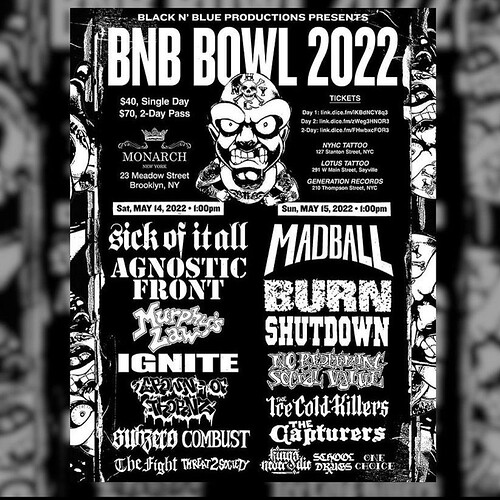 Great one in Philly in July: 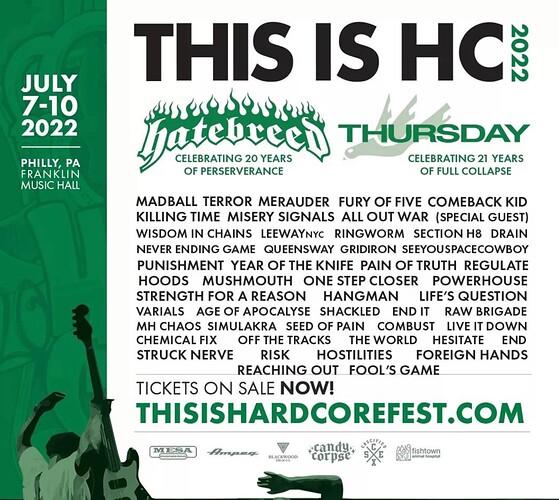 Ty Segall is doing a small venue tour at the moment. He puts out a new album every 6 months, so there’s no telling what shows up.

Small venues are where it’s at IMO. An old theater with a fully stocked bar is premium.

I see the yeah yeah yeahs on there. Big fan of them.

I’m going to see White Chapel, kind of by accident, they are opening for As I Lay Dying next month.

Funny story… My band opened a show for Madball in like 96 in Southern California. We were punk rock, totally not a HC band, and should not have been on that bill. But my buddy was selling merch for us and jokingly asked if I wanted a Madball shirt while they were setting up. Madball’s merch guy was also a roadie, and my buddy was asked to watch their shit. So he throws me a Madball shirt, I didn’t want to look like a pussy giving it back, and kept it. I spent the rest of the show wondering if I was going to get my ass beat by Vinnie Stigma.

I’ve heard nine inch nails is pretty good. That’s the one with the NI backwards N if you didn’t know.

spotify or tidal, they keep sugesting based on what your listening too, found alot of new and old I like.

I fuck 18 year old girls and have them put their playlist on during sex.