I miss my friend

I moved the family up here about 10 years ago.

Next door to the house I bought was Kevin. I was working on the driveway one day, lining it by hand with big fuckoff boulders. No bullshit, each one took me an hour or more to roll down the hill. Initially I thought they were leftover from dynamiting the mountain. Turns out, it wasn’t from dynamite at all. They’re glacial boulders. Wild shit.

Anyway, that one day, I’m rolling boulders and lining the driveway… Kevin pulls up next door blasting MY GIRL from his car windows. Talkin bout my giiirrrrl… My girl!!!

Kevin gets out the car. He sees me rolling boulders. He doesn’t even ask my goddamn name. He just yells down the side of the mountain… YO… YOU SMOKE???

So I go up to the house. This motherfucker pulls out a 2lb bag. We reminisce about the old days of 718 and 212. He tells me stories about Harlem, I tell him stories about BK and Queens. 30 years between us, easy. But the stories are exactly the same.

Then one day, Kevin says he’s gotta go away for the summer. Says he’s gotta meet up with some old friends and needs me to keep an eye out on his family and the house.

I’m on board. Anything for my friend and his family. Let me know and I got you taken care of, right?

A week later, his wife shows up at my door at 6am. Kevin’s fucking dead. Laying in the bathroom, choked up on his own blood.

He said the cancer was in remission. He lied.

I honestly don’t know how many years it’s been since that morning. Seven. Eight. I don’t know.

All I know is that I have not since then made any new friends.

RIP Kevin! I’m assuming he was older than you? Sounds like he had an unhealthy lifestyle.

Sorry for your loss alto

Unhealthy? Sure. He smoked like a chimney. I grind all types of unhealthy shit, which despite my fit-tested N95 mask is gonna kill me one day.

Difference is, I’m honest about it with my loved ones.

He fucking lied to me. He told me not to worry about the cancer. Said he had his screening and it was in remission. It wasn’t.

That lie crushed me for a long time. Still hurts.

I live every goddamn day of my life next to the house he bought. Now derelict, cuz his wife is not able to properly keep it up.

I don’t get sad often at all… But goddamn. It’s hard when the house is just staring you in the face every damn day.

I miss that beautiful son of a bitch.

You had a neighbor who smoked, who you bonded with, who you called a best friend, whose family you viewed as your own…

I understand your grieving, but try to think of the positives.

You’re lucky to have had such a cool neighbor.

What the fuck are you on here crying about?

That’s a great way to look at it.

You don’t have any? Shit. Consider yourself lucky. It’ll happen to you one day. And it ain’t fucking fun. And it doesn’t get better.

I never would have understood this until the past year, but the reason he lied to you, is because he felt you loved him so much that you would be sad on his behalf.

That’s the reason. Admirable as fuck if you ask me. I had my own problems and the friends/family I vented to, felt really sad and I realized, when there’s nothing they can do, all I’m doing is sharing my sadness with people I care about so I quit venting and just dealt with it on my own, out of respect/love for my loved ones.

That’s the only reason man. Not that I didn’t believe you regarding ya’lls close relationship, but that just goes to show you guys truly were close for him to want to keep that sadness out of your life. Had you known about it, you would not have been able to do anything about it and more than likely would have been sad, and he didn’t want his buddy to be sad.

This is why we need to take care of ourselves! This man decided he would rather smoke, get cancer, and die then spend more time with his friends and family. Take care of yourself so you can take care of others!

I’m so sorry brother and thank you for sharing. I lost my father to lung cancer in November, it was the most painful experience to watch. I feel ya and my hearts with you man.

Here’s one of my last photos of my dad. I feel like sharing so you know you’re not alone with this pain. 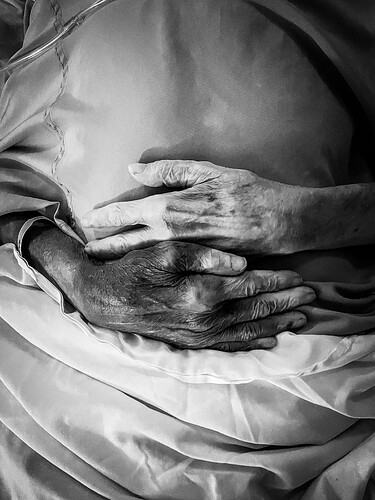 You are this forum’s “knife guy”, right?

If so, tomorrow is my brother’s birthday and I was thinking that next year, maybe I could get you to make a knife I can get him. Is there a price range for products you can produce? I assume you can engrave?

Agreed… If I were in that position and wanted sympathy, I’d look between shit and syphallis…

Can’t say whether or not it’d have made any difference. Probably wouldn’t have. Just the same, I’d have preferred to know.

Then again, when my time comes, I might feel the same way and want to spare my loved ones the knowledge of the inevitable.

Oh what a world.

Absolutely. I don’t do engraving, but I do offer hotstamping. Alphanumerics and such. Names, dates, etc.

Fuck. Sorry for your loss my friend. Shit is never easy.

Thanks man, shit is beyond hard. But look at us, we’re still here and pushing forward. Proud of you man.

What the fuck are you on here crying about?

You are a cunt.