'I need to be better at not being held down' - MVP

MVP isn’t complaining about the loss. He’s taking it like a true martial artist and realizes he has a deficit and it was exploited. Props to him for that.

Pardon me, “new” champ.
And no, it wasn’t interim, Amasov relinquished his belt as a matter of fact. 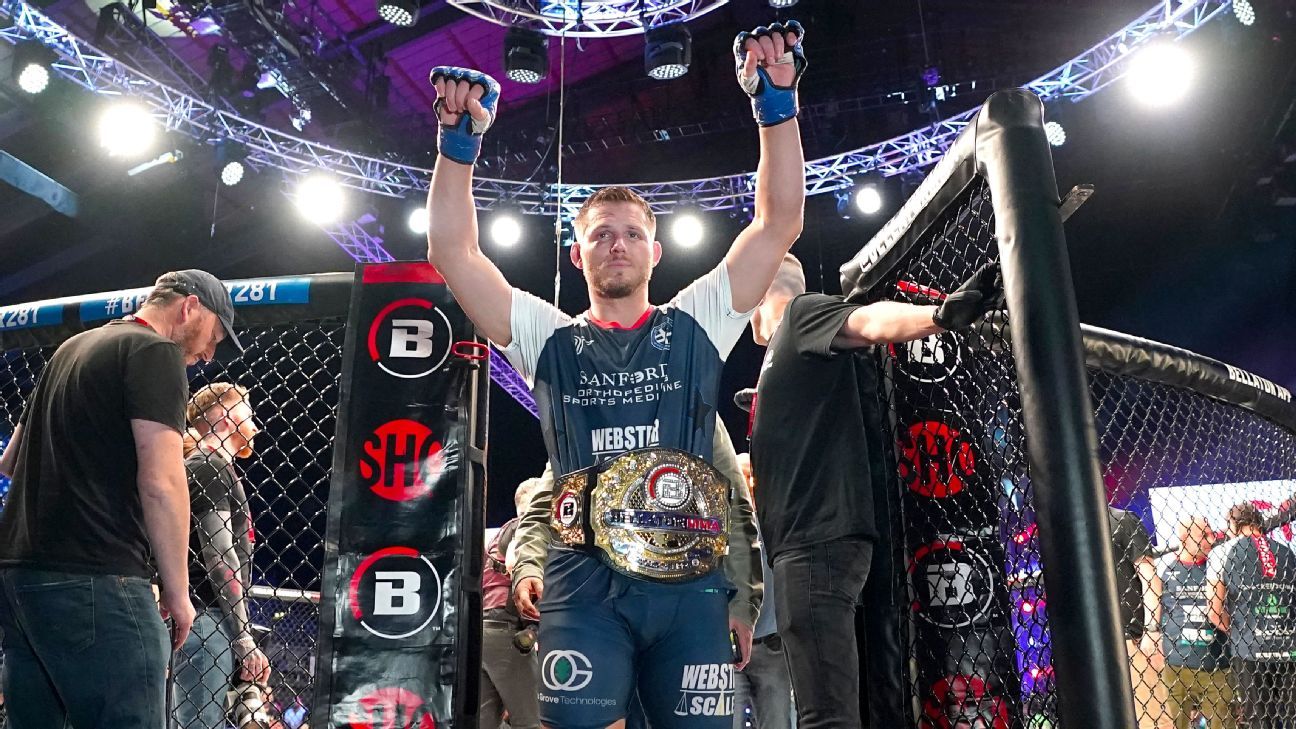 Logan Storley claimed the interim Bellator Welterweight title in London on Friday with a split-decision (48-47, 47-48, 49-46) victory over Michael "Venom" Page at the OVO Arena Wembley.

That was done posthumously fyi.
Kinda like Biden “winning” the presidential election.
Mid-way through the broadcast the color commentating was encouraged to create this narrative of “interim” in case.
The title was vacated.

Now thankfully in this case, I’m glad they pulled the interim card.

I’d tell ESPN a lot of things, like they should’ve hired me to run this place.

That was done posthumously fyi.
Kinda like Biden “winning” the presidential election.
Mid-way through the broadcast the color commentating was encouraged to create this narrative of “interim” in case.
The title was vacated.

Now thankfully in this case, I’m glad they pulled the interim card.

I’d tell ESPN a lot of things, like they should’ve hired me to run this place.

Bellator still has Amosov listed as the champion on their website.
On Bellator’s wikipedia page they have Storley listed as an interim champion.

Everything I can find states Storley is the interim champion, as I initially stated.

any different than BLAF’s done 500 times

I was agreeing its the same thing.

you cant wrestle you cant fight

The source was Bellator itself a month before the fight. Every Bellator commercial, every Bellator official site listing.
Like I said, posthumously.

Only at the beginning of the main card broadcast by Amanda Guerra did we here the word “interim” title.

you cant wrestle you cant fight

You should know better than this WW.

If you were to define “MMA”, it goes without saying that wrestling is a base.

MVP knows how to wrestle, and his tdd was actually very good against div-1 Logan who’s made a career doing it.
The same broad statement can be made about striking.
“You can’t strike you can’t fight”.

Big difference between fighting, wrestling, boxing, kickboxing, NHB, Lethwei, MMA etc.
The NSAC’s most recent rule changes pertaining to takedowns and control highlighted the deficiency in accurate scoring.
Again, I’m unclear on UK’s rule implementation as my disadvantage in the argument.
But in totality we cannot be archaic in judging fights, that is to say this isn’t Randy Couture’s MMA.

This falls on the ref for not being assertive in his judgement, and possibly the judges depending on the athletic commission guidelines.
Coker should be cut some slack as he’s simply voicing his disdain for what happened in there with the backdrop of multiple organizational rules over decades and the U.S. adoption of a ruleset where Logan SHOULD NOT have won for stalling.

Imo it’s being viewed by disgruntled fans who feel MVP has been given subpar opponents & point to Coker being upset about a golden ticket rather than the “fight” itself; decision bias.

As far as fighting goes, Logan did not win a “fight”, he grappled for dear life and held on several times.
Any improved position was never capitilized on, and the most damage, risks taken, as well as effort to actually end the fight, were initiated by Page.

I don’t hate MVPs comments on this

MVP is awesome, super cool and smart guy, 99% of wrestlers cannot really control him like Storley did, it was the usual lay and pray decision, doubt this guy will be champ for long with just wrestling.

Not entirely, 1 judge got it right-er than wrong-er.
It was a split.
Hometown, possibly, if anything it was a tragic draw with control negating damage.

Had the ref done his job 3-4 times, we’d likely be either looking at a different result, or a more justified one.

in all honesty i got to watch it again I was half asleep.Not fan of either

what wrestlers has he fought

Any news on this chap