I Wanna See You Eat The Whole Sausage

Sexual harassment allegations are a distraction from the real scandal 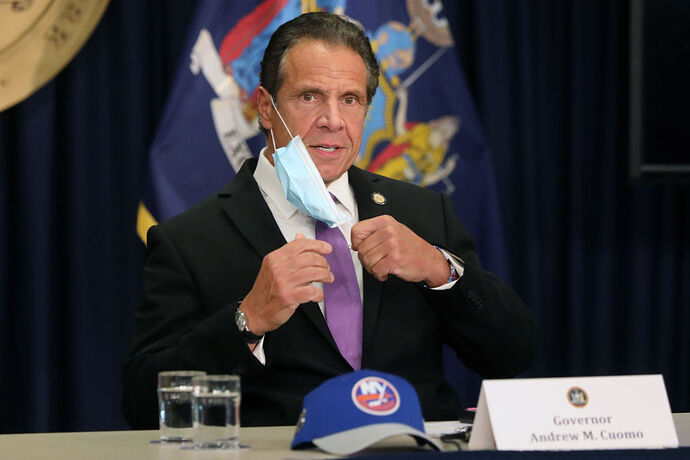 The press has decided that the real story is Cuomo being slightly creepy toward to young women, not killing off New York’s elderly population

New York governor Andrew Cuomo is finally getting his comeuppance. Oddly, however, it’s not for killing thousands of nursing home residents. Instead, the press has decided that the real story is Cuomo being slightly creepy toward to young women.

Cuomo’s comments to two former aides are icky, no doubt. However, the media has also piled on with other spurious accusations that they insist are proof of a pattern of abusive behavior.

In one, a young woman says Cuomo touched the small of her back at a wedding and then grabbed her face and asked if he could kiss her. She is visibly uncomfortable in a photo of the incident, but what attractive woman hasn’t had a weird old dude make a poorly strategized advance at an event with alcohol? Usually we just laugh about it afterward with our friends and warn them to stay away. We don’t insist on the man’s cancellation.

A media #MeToo frenzy is gathering pace, however, and now another incident is gaining traction on social media from the 2016 New York State Fair. It’s a video in which Cuomo jokes with a female reporter to ‘eat the whole sausage’.

The woman involved in the incident has said publicly that she wasn’t offended:

‘I was not pressured/harassed this is two people enjoying the one event — the NYS fair — that gives them a little more freedom to be informal. It’s really sad it’s being turned into anything more.’

You wonder why the media is now so frantically spinning up these sexual harassment charges. Could it be a distraction? Cuomo was facing serious heat for his policy of putting COVID-19 patients back into nursing homes and subsequent undercounting of nursing home deaths. A report from New York’s attorney general confirmed the undercounting and a leaked comment from an aide suggested that it was done intentionally to avoid a federal investigation. That’s a serious and awful scandal, yet it is one that might force progressives to challenge many of the lockdown policies they have so eagerly embraced since last year. It would compel them to accept that Cuomo, who they heralded as their authoritarian champion and a Democratic hero, actually bungled the COVID crisis and killed lots of old people.

Introspection and mea culpas aren’t the left’s strong suit, so Cuomo has to be turned into a ‘predator’ — and not just a slightly gross elderly man. Progressives are kneecapping Cuomo with their favorite weapon — #MeToo — because they don’t want to admit that the man they celebrated for imposing harsh COVID restrictions was actually a disaster. It’s much more salacious and viral to snicker about ‘inappropriate’ sausage remarks, or discomforting male behavior towards young women, than it is to talk about old people being left to die in grotty, badly managed care-homes. But it also distracts us from a far more serious and damaging story. I don’t much care if Andrew Cuomo is a bit sleazy. I do care that, in his arrogant incompetence, he might have killed my grandmother.

Why does the stupid fuck talk so slow? Is that a NY fake tough guy thing?

Can’t stand cuomo, but these allegations against him are ridiculous, and quite funny.

I wish people were as angry about him killing grandmas as they are about him joking about a bratwurst and kissing a woman’s cheek at a wedding.

What’s ridiculous is these stupid half-assed #metoo accusations are deflecting criticism of Cuomo away from killing grannies in nursing homes and then trying to cover it up for nine months in order to avoid federal investigation. It’s a total misdirection.

The media and dems want you to look over here (#metoo scandal) so that you don’t look too closely over there (granny killing and coverup scandal). Cuomo is fucked either way, but by deflecting attention away from his lockdown shenanigans, they are preventing that story from metastasizing to other blue state governors who did the same shit (Whitmer, Murphy, Wolf, etc.).

I would argue he is not fucked either way. He is a Democrat. Nothing will happen, the story will blow over.

That’s a tough argument to make now that his party has deemed him beyond saving and turned on him. If he was still useful, I’d agree.

The difference is in VA you didn’t have a bunch of power hungry democrats looking to take his job like the NY AG, Deblasio, etc. he also wasn’t a leading early contender for a democrat primary that could rival Kamala Harris in 24.