Immigration enforcement officers are making 7-Eleven stores a target in their crackdown on employers who hire undocumented immigrants.

On Wednesday, agents with U.S. Immigration and Customs Enforcement descended on 98 7-Eleven franchise stores across the country, where they began audits and interviewed employees and managers, according to the agency.

"Today's actions send a strong message to U.S. businesses that hire and employ an illegal workforce: ICE will enforce the law, and if you are found to be breaking the law, you will be held accountable," Thomas Homan, ICE's acting director, said in a statement.

It's the largest worksite enforcement operation against an employer under President Trump, ICE said.

Trump has been tough on immigration during his year in office, and Homan pledged to quadruple workplace crackdowns in October. Still, on Tuesday Trump seemed open to talk of comprehensive immigration reform. He also said he supports a fix for the Deferred Action for Childhood Arrivals program, which protects undocumented immigrants brought to the United States as children from deportation

7-Eleven, in a statement, sought to distance itself from the hiring practices of store owners.

"7-Eleven franchisees are independent business owners and are solely responsible for their employees including deciding who to hire and verifying their eligibility to work in the United States," the company said. "This means that all store associates in a franchised store are employees of the franchisee and not 7-Eleven Inc."

The company added that it "takes compliance with immigration laws seriously and has terminated the franchise agreements of franchisees convicted of violating these laws."

ICE characterized its action Wednesday as a "follow-up" to actions it took against 7-Eleven franchises in 2013.

Nine franchise owners and managers were arrested for conspiracy to commit wire fraud, use of stolen identities and concealing and harboring employees who were in the country illegally, according to ICE. All but one, who was a fugitive until November 2017, pleaded guilty, and they were forced to pay more than $2.6 million in back wages.

The raids on Wednesday were meant to ensure that "the company has taken the proper steps towards more responsible hiring and employment practices," ICE said

I guess I’ll have to order less family reunion shirts this year.

Who's gonna prepare my Big Bite and taco rollers?

GUYS THIS IS SERIOUS! HAVE YOU EVER TRIED TOCHANGE THE CHEESE BAG YOURSELF ON TJE NACHO CHEESE MACHINE?!?!!

I guess I’ll have to order less family reunion shirts this year.

But what about the excellent customer care?!? Where will we get that? 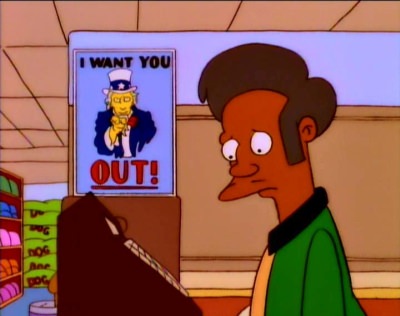 My fiancé sent me this article today bc she found it amusing as we were in a 7-11 in Los Angeles yesterday an my card got stuck in the ATM machine and two of the employees helping us kept saying in their country they would have gotten my card out this way or that way and that they can’t do that here bc they are not citizens lol.

Just amusing.  And I don’t care where you are from, if you are here illegally from England, Mexico, the Ukraine or the Middle East you need to go the fuck home. Driving through the garment and packing district after the 7-11 experience really drove home how fucked up CA is and how we as a country and state need to help our current citizens. The homelessness and amount of batshit crazy nutters and their homeless tent and cardboard box mansions was un-fucking-believable. I went to USC and graduated in 2002 and the same area was filled with significantly less homeless people then. Fuck the CA government and politicians.

$.12 guy got his revenge. Scrounged up a dime and called ICE.

I hope there were no Slurpee machines damaged during the raids.

good for the executive branch enforcing the laws

This is good.  If they raid non chain convenience stores they'd find more illegal employees that work for ridiculously low wages for crazy long hours.  I know Indian people do that type of shit alot.

This will put the price of a 3 day old hot dog through the roof.

I guess it would be a good time to put in that application.

Anyone seen DrRaj or whatever the fuck his name is?