my wife and her family are from sheep’s head bay.

my wife and her family are from sheep’s head bay.

Used to visit clam shops when I was a kid. I didn’t understand how the adults could eat all those clams and not puke. My mom put a clam in my mouth, and I spat it out on the floor. I can’t stand the taste of clams, but I saw the adults slurping down like it was ice cream.

But I heard SHB is a Shithole now. I haven’t been there in in 30 years.

Have you ever had that with banana peppers?

Good thin crust with black charred bubbles of flavor on the crust that is not too dense can be surprising hard to find.

Even at some “gourmet” toppings places… they will have a dough with too much sugar or a crust that is thick, dense and lacks flavor.

Its crazy how across all of America, 99% of pizza is either terrible or ok but not great.

The demand for great pizza can’t be that small, can it?

Hamburger pizza but make sure you dont order from some stupid liberal shindig that literally makes it a burger pizza with lettuce, ketchup mustard and all that shit.

Its a regular pizza with minced hamburger meat and bacon on top. Mozzarella and cheddar cheese.

depends on your perspective. italians, poles, and jews (and italian-polish jews like my wife’s family) never moved out but a lot of other groups moved in. i like that it’s a melting pot and you don’t get that vibe you do in a lot of neighborhoods where it feels like you don’t belong there if you aren’t part of some extremely specific emigre segment. it’s definitely still 70-ish% percent old school brooklynites, regardless of race. i love the accent.

her family’s end of the neighborhood is pretty nice. most people live in well kept brownstones fairly near to the parkway but enough blocks away it isn’t wildly crowded. i never see many homeless or panhandlers and the businesses nearby are clean. overall it’s basically just a grandma neighborhood.

reeeaaallly good jewish bakeries and as you said some old school seafood spots that are still going.

I’ve ordered that from chain pizza places and you’d think it was from a high quality mom and pop pizza joint. Banana peppers would be good on.it.

Since I got an Ooni and started making my own pizza, I can’t order out for pizza anymore. It all tastes like shit compared to my own creations. 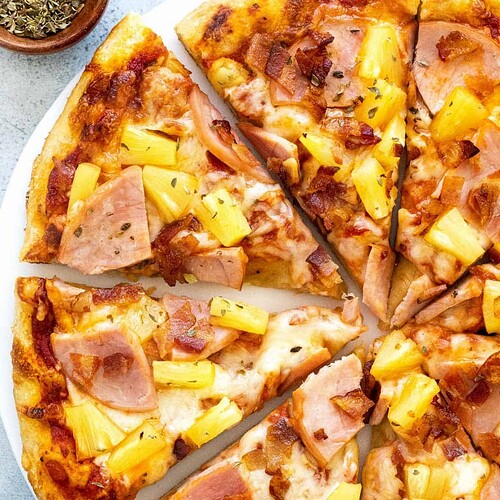 I see bacon, I’m pretty sure the addition of bacon makes that Hawaiian pizza turn into a Hawaiian Luau pizza. I’m a big fan of the Luau, I eat two or three of those a year and would never go back to the standard Hawaiian pizza. Fuck, now I want a Luau pizza. Just add a little crushed red pepper and you are all set.

Careful though, don’t get too crazy with the pineapple or leave uneven piles of ham or bacon, everything needs to be in proportion and distributed well for the full Luau experience.

Lol. I only.eat food comparable to the women i pursue.