Is Adrian Yanez a contender at Bantamweight?

Is Yanez a contender at Bantamweight? With the boxing skills and speed which he showed, I already believe he could beat some fringe top ten guys.

What do you think? 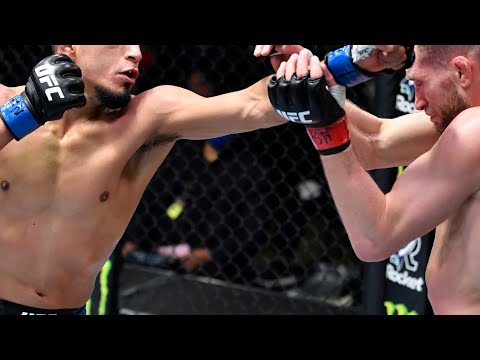 Please join my Patreon at: SlicedBread1993 is creating Football and MMA videos | Patreon

He didn’t look like one in his last fight against a tailor made opponent.

After what his ear looked like he is a dickhead. It seemed to be getting more erect as dc fondled it

I think “contender” is early. As you said, he just fought a guy who was custom made for him (zero defense and head movement), and while Yanez looked good with his hands, he got landed on quite a bit. An opponent with more power probability hurts or maybe even finishes him. He has good offensive hands, for sure, but I wasn’t quite understanding why they were playing him up like he was Apollo Creed or something. I think he has potential, but his upward movement in the division is going to become challenging if he can’t get better at avoiding punishment.

I would say, that in time, with the right development, he could move up, but the guy he beat this past weekend for all his hype, wasn’t a world beater by any stretch.

Yanez looked very beatable against Randy Costa (before Costa gassed) and Davey Grant. And neither are close to the rankings.