Is This Guy Rock’s Scariest Guitarist?

There are some old videos, but nothing worthy of posting on a “Rock’s Scariest Guitarist” thread, that’s for sure, lol. I’ve pretty much been just studying and playing Flamenco guitar the past 3 years or so since the pandemic started.

Esteban is where it’s at, noob.

The past few months I’ve been locked in a gypsy jazz phase, myself.

Perhaps Buckhead is the guy from Halloween: a psycho!

dude hit me with a line i still lol over. when i met him at namm, i mentioned hows the tour with asia and he said i’m not in asia i’m in asia minor

He’s phenomenal. I’ve seen him do things with one hand that many would struggle with using two.

In your opinion, what is he doing that is beyond Holdsworth or Shawn Lane? I mean no argument, just would like to hear what you think.

Out of the three, my vote would be for Shawn, but actually neither his music nor Guthrie’s (or Holdsworth’s) does much of anything for me.

At that level it’s almost personal preference since they’re all virtuosos.

Same with drumming. There’s so many killers out there now, take your pick.

Out of the three, my vote would be for Shawn, but actually neither his music nor Guthrie’s (or Holdsworth’s) does much of anything for me.

Shawn Lane does nothing for me either. Obviously a spectacularly good guitarist…but nothing I enjoy listening too. I’d listen to a good bluesy hard rock guitarist over him any time.

Lane is probably the fastest alternate picker ever and Holdsworth is probably the best legato player ever, but Guthrie is able to basically play their stuff and also combine those and other crazy ideas into an even higher vocabulary level of playing if that makes any sense. He’s able to play and create lines on the guitar that have never been done before because of his endless technical ability and creative improvisational mind.

He doesn’t stand out as having a totally unique style with licks, lines or riffs to immediately hear it and think “that’s Guthrie” like you would with other players like Lane, Holdsworth, Malmsteen, etc. but his state of flow and improvisational skills are off the charts.

I think this is a recording he did for the British magazine Guitarist where he wrote and plays in the style a bunch of other iconic players. This was one of the things that “put him on the map” to more of the general public. 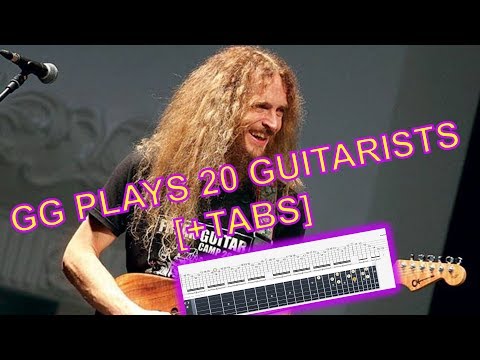 Incredible player but I wouldn’t classify him as rock. he is a jazz player for the most part. he can certainly play rock but he seldom does

The Mark Knopfler section was a nice addition…

JMAN! Soundground. Long time dude. How you been?

I think I could hang with him on the edge section, but maybe not. Lulz

I’m good. I’ve been playing through Dennis Koster’s three flamenco guitar books over the pandemic (finally made it to book 3 after 2 years). Still not very good at it, but getting better. Something fun to do later in life I guess.

Biggest challenge is dealing with arthritis and tendinitis in my hands as I get older. Glad I quit doing MMA in my 20’s, I can’t imagine the pain my entire body would be in at this age if kept that stuff up.

Dude, same. I picked guitar back up during the pandemic and put he piano down. The tendonitis shit is killing me if I overdo anything. Anyway, was nice way to visualize music theory going from guitar to piano and back again. Yep - I hear ya, music is just entertainment but feels more productive than video games. My fav thing now is to throw random EZDrummer tracks together and just try to riff over it, then turn it into ideas.

but actually neither his music nor Guthrie’s (or Holdsworth’s) does much of anything for me.

I get that. I got into guitar because of Eddie Van Halen. I read every article about Eddie and every interview he did. I bought the old “Hot Licks” tapes with tab transcriptions to learn some of his bits.

In one interview he mentioned Holdsworth. This was early-mid 80s. I knew Eddie had cited Clapton and Hendrix as influences, so I was interested in hearing this Holdsworth guy I had never heard of before. I assumed he was some rock shred god. But back then you couldn’t just google someone’s name and see their discography. The local record stores had no “Holdsworth” section (and I even checked the jazz section).

Finally in one magazine I it mentioned that Holdsworth had played on an album with a French violinist named Jean Luc Ponty. I went down to the local second hand, “if you can’t find it here you can’t find it anywhere” record store, and scored a copy of JLP’s “Enigmatic Ocean.” I was a little skeptical because I had never heard of rock violin, so I didn’t know what kind of music to expect. Well it definitely isn’t rock. I was a little disappointed when I first listened to the album; definitely not my style of music, and nothing like Van Halen.

But it was interesting enough that I listened to it a few more times. Both Holdsworth and Daryl Stuermer played guitar on that Album. Stuermer later went on to play with Genesis.

Anyway, while I wasn’t really ready for it back then, it has since become of my favorite albums, and one of Holdsworth solos on that album is one of my all time favorite guitar solos. I bought his later stuff, too, some of which EVH had a hand in producing, but while I could appreciate the technical skill and musical creativity of the music, it just never resonated with me.

Thanks. I heard him and thought he was amazingly good at playing other people’s stuff but that he didn’t really have his own sound. But I didn’t know that he is doing things on the guitar that haven’t been done before.

I guess he falls into a kind of progressive jazz fusion genre which is probably why I don’t get it. I mean, I know his technique is impressively flawless. But I’m allergic to the pentatonic scale and fusion, whether music of food. So it’s hard for me to see what is impressive in terms of zone/improvisation.