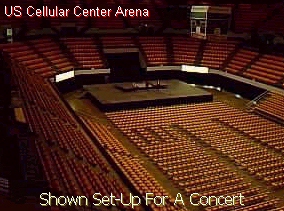 It had come down to 4 locations of the over 50 Bid Proposals we received from around North America. One location in Chicago, one from Georgia, one in Tennessee and the Iowa location.

In the end, it was the combined efforts of the US Cellular Center (Right, The same Event Arena used for the 2003 and 2006 IKF Annual Kickboxing Tournament), and the Crowne Plaza Five Seasons Hotel (Left) and the Cedar Rapids Convention Visitors Bureau in Cedar Rapids, Iowa, USA.

The photo at the left is a shot from the second level of the Arena, before event day for this years IKF World Classic kickboxing Tournament. 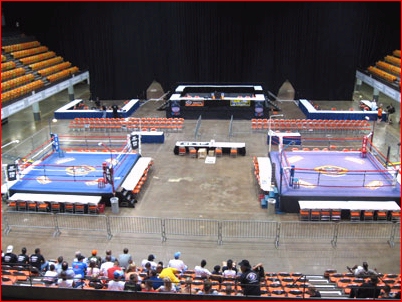 The black curtain in the background of the left hand photo hung from floor to ceiling and split the arena in half. The full size of the arena (With chairs on the floor) can be seen at the right. This is the same Arena that the UFC used when they came to Iowa back in the 90's before settling in Las Vegas. The half you see was for the competition and behind it was all warm-up area. The fenced off area around the rings is called "The Pit!" This is the fighters "staging" area. Fighter's were called to "The Pit" prior to their bout to be fully prepared to enter the ring for their next bout. This procedure will be the same procedure for the ISCF MMA WORLD CLASSIC. Behind the rings you can see some of the vendor booths and the main announcer platform.

At the ISCF MMA WORLD CLASSIC, the two rings will be replaced with 2 fight cages and on the other side of the curtain will not only be warm-up area for the fighters but also potential space for a "Non Striking" Grappling Tournament on mats that the ISCF is currently deciding if they want to host at the Tournament as well.

The US Cellular Center is a beautiful 28,000 square foot "Stadium Seating Arena" which has held the title of the FINEST Venue we have ever had over all the years (8 straight years now) of the annual IKF Kickboxing Tournament. There is a total of 16,200 square feet on the actual arena floor space, and add in the Stadium Seating area and there is plenty of seating for spectators. Better yet, since nearly all the seating is elevated, there is not a bad seat in the house!

It is one of the most impressive entertainment venues in the Midwest. It also has 4 complete locker rooms (Showers, lockers etc.) for the participants and plenty of warm-up area surrounding the outside of the arena bowl under the elevated seating areas. As far as sporting events, in the past it has hosted as mentioned above, the UFC along with the Taekwondo Nationals and many Wrestling Championships and even WWF wrestling (Now WWE), not to mention many stars like the Harlem Globetrotters as well as concerts including KISS, Prince, Stevie Ray Vaughn, Amy Grant, Diana Ross, Pantera, Motley Crue, Alan Jackson, Brooks & Dunn, Styx, AC/DC, Tim McGraw and Faith Hill, Diamond Rio, Martina McBride, Gaither Homecoming, Barry Manilow, Chicago, Bon Jovi, Blue Collar Comedy, Chicago, Beach Boys and Bob Dylan.

Current acts include Disney on Ice: 100 Years of Magic, Martina McBride and the Harlem Globetrotters just to name a few. 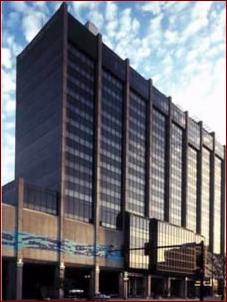 It is connected by hallway to the US Cellular Center and connected by 12-block skywalk system to numerous shopping and dining options and 2 theatres, the Theatre Cedar Rapids and the IMAX Theatre. All 275 rooms in the 16-story hotel feature cable TV and in-room movies, coffee maker, hair dryer, ironing board/iron and there are of course, non-smoking rooms available. There is also a business center, fitness center, indoor pool, and sauna. Top of the Five rooftop restaurant and Front Street Lounge, serving lighter fare, are both open 7 days a week. The room rate for a weekend at the Crowne Plaza Five Seasons Hotel is usually $140.00 per night, however our special ISCF MMA WORLD CLASSIC rate will only be $109.00 per night. The US Cellular Center is simply down an elevator and a hallway from everyone's hotel room.

"Like what happened this year with our IKF Tournament, the final factors came down to dates, facility and our past working relationship with Mary Lee Malmberg, the Director of Sports Tourism at the Cedar Rapids Area Convention & Visitors Bureau." Said ISCF President Steve Fossum. "The Cedar Rapids bid offered as much or more than all the other bids and with an availability date of April 27th, 28th & 29th, it was a major factor in the final decision."

HOST HOTEL
ALL Participants are required to stay in the Host Hotel.
This is a lesson we learned at a past IKF Tournament. The lessons learned happened at back to back IKF Tournaments before we made the decision to put in place the mandatory host hotel rule. At one of our past IKF Kickboxing Tournaments we had Fighters get injured in their bout and we needed to contact their parents who were not in the venue at the time of their bouts. At another past tournament we had some fighters we needed to locate due to bout changes but we could not find them in the event room or in the hotel because they were at another hotel sleeping. Due to these issues causing a lot of problems, we do not want to face such issues again. This is why this is a MANDATORY RULE now for competitors at not only the IKF Kickboxing Tournament, but it will also be a rule for the ISCF MMA WORLD CLASSIC. At Registration we will be asking each fighter and trainer for their room number and room confirmation code in case we need to contact them for bout or schedule changes or in case of any emergency. The The ISCF will have a main Headquarters Suite for all event organizations duties. The hotel layout also allows us to block off a private floor for all the ISCF Event Officials to book their rooms on.

20K+ IN AWARDS
EVERY FIGHTER will walk away with some type of Award(s) or Gift(s) from the ISCF and other Sponsors!
The awards for this event alone will be a major expense. Awards will be broken down into two different divisions.

ISCF's OBLIGATION TO THE SPORT...
Looking at the numbers above, once one does the math for 8 belts at $1000.00 each ($8,000.00) plus the other 8 at $265.00 each ($2,120.00) and already we have over $10,000 in just Belt Awards. This does not include the Thousands of dollars in additional awards "AND" if we decide to have a Woman's MMA Division, start adding more $$ to the mix. Overall we plan to give out between $20 and $25,000 in awards and gifts alone. This will be the ISCF's opportunity to "Give Back" to the Amateur side of our sport because as you can add up here, there will probably not be any profit for us in this event unless we sell a lot of spectator tickets, so "Bring your Fans!" Like with the yearly IKF Tournament, that started as a USA only, than grew to a North American and is now a WORLD Amateur Kickboxing Tournament, we feel it is our obligation and duty to create the Ultimate "Golden Glove" style tournaments for our fight sports! The expenses for this Tournament and the other Tournaments we host are necessary to create "Legit Amateur Champions." We hope you agree. 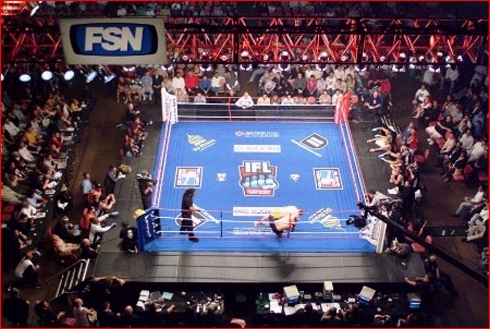 event along with Kickboxing event Promoters and Pro Fight Scouts for large Pro Events. This will be no different for the ISCF MMA WORLD CLASSIC We already have a plan on who will be our Special Celebrity Guests and we will be making that announcement after the first of the year. However we would also like to let you up and coming Amateurs know that THERE WILL be Pro Scouts there from "SEVERAL" Large Pro MMA Promotions.

One of those Large Pro MMA Promotions is the IFL, the International Fight League. (www.ifl.tv). The IFL is a League of Pro MMA Teams that compete on a circuit throughout a season towards their own Championship Event. We have already received word from Mr. Keith Evans, VP of Operations for the International Fight League that he and several IFL Associates and Team Coaches will be at the 2007 ISCF MMA WORLD CLASSIC.

As for the other Special Guests, we will be announcing them between now and the event. Simply put, this is going to be BIG! 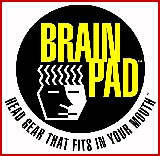 For those who are in the MMA Game, you know Sponsors Love MMA! Sponsors will LOVE this Tournament! We have

already had commitments from several Sponsors such as "Combat sports international (ringside's Martial Arts division), Brain Pad and others. If you know of someone who would like to sponsor this event or donate gifts for the Athletes, please let us know by e-mail at: info@iscfmma.com

We will also have Vendor Booth space available inside the arena at the event. Our plan is to make this not just an MMA Tournament but an MMA Fair! As with the Sponsorship, those interested in Vendor Booth Space, Banner placement, Program Ads and more, please let us know by e-mail at: info@iscfmma.com

MMA SEMINARS
Although not confirmed, we have had quite a bit of interest from several Top MMA fighters who would like to offer some MMA Seminars at the event. We have also had several trainers and amateur fighters ask if there will be any available as well. We are unsure if we will add any seminars to the weekend's schedule but it is indeed something we are thinking about. If you have any thoughts for or against seminars on the weekend please let us know by e-mail at: info@iscfmma.com

TV?
We don't want to make any promises now but what we will say is that we are offering this Event up to several TV Networks and those who have responded back have been very interested. However as you might guess, there are tons of details and expenses in producing programing from an event this size. So, we will keep working at it and see what we can do to bring all of you more exposure to the many MMA Fans around the world. We have had discussions with programmers of Internet TV, Cable TV, Satellite TV and Network Broadcast TV. Hopefully we can "Make Something Happen" with one of them for this GREAT EVENT!

Fighters... It's time for us all to stop "Talking The Talk!" If you think you are the BEST Amateur MMA Fighter in the World, It's time for you to come join us, and prove it to the WORLD as we all "WALK The WALK" at the 2007 ISCF MMA Classic - Amateur MMA Championship Tournament!

We look forward to seeing you all there...

For more info about the 2007 ISCF MMA WORLD CLASSIC - Amateur Championship Tournament, Click HERE!
Please note that some pages have yet to be updated

This is awesome... Should be a good time!

ISCF's sister organization - the International Kickboxing Federation - has a great World kickboxing tournament. Steve Fossum is experienced in organizing and running a tournament like this. It will be a great event.

I like it but if the iscf isnt paying for the hotel how can you mandate where somebody stays? and if they choose not?

it's a great event for the amateur athlete!

I would guess that if competitors don't want to follow the rules of the event, they forfeit the right to compete.

I think it's kinda crazy to make somebody pay $100 dollars a night if they can find a cheaper hotel somewhere else...But, either way, I will be there! =)

yeah thats all I was saying- thats a nice hotel and I would guess some people could not afford it.