Okada was getting a fair amount of stateside press during his feud with Omega, Sports Illustrated and so on. He was a big part of a sold out show at the Garden. I think a decent amount of casual fans are aware of his name and reputation.

Nah.
I count my stoner friends as casuals. They have zero clue who he or any of the japs are, minus the masochistic old man.

Agreed. The blonde guy with roots had 100x the charisma. Okada and Omega had maybe the only match njpw match I remember. But he was underwhelming. Still, a pretty fun show despite the constant jobbing to my boy Pentagon. 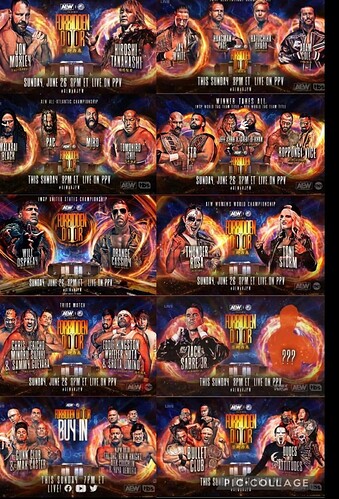 good card, especially given all of the injuries and politics

I’m glad he’s there. but they should have had the Okada dollars falling from the ceiling to make it complete.

Right, but he shows unannounced up 4 days before the show in the middle of an hour. Then they really didn’t announce the match as a four-way. And why is it a four-way, anyway?

They could’ve used some video packages building him (and others) up. Talk about his matches with Omega and how he’s probably the best wrestler in the world. It’s foolish to assume everyone knows who he is (they don’t).

But as the poster above mentioned, maybe this isn’t a show for casuals. Maybe that’s why their TV ratings have tanked the last couple of weeks.

okada wasnt totally unannounced. he was expected to show up on the ppv go home show. hangman had done a promo on an earlier episode where he screamed okada’s name and said he wanted to fight him

It’s foolish to assume everyone knows who he is (they don’t).

I’ve learned not to underestimate how much AEW fans know. At the first All In, I was pleasantly surprised to hear them chant Okada’s name during his match. (Of course it’s understandable if AEW doesn’t want to reference that match, since his opponent wa Marty Scurll.)

Is scrull still in the business

I think he got metooed

Scurll and Deeb supposedly broke up.

they were married and bought a house together a year ago

I think he got metooed

Yeah he was for sure me tood. Was he the one that got in trouble just for asking a girl to hook up? Or was his situation more serious.

Marty got screwed over from everything I’ve read. The girl was hitting on him after a show, took him back to her hotel room, and then complains about it five years later on twitter. She was of age of consent in whatever area they were in(16), but she says she was drunk. Marty never denied any of it but says it was consensual.

I mean yeah, maybe don’t pick up women that young but other than the age that sounds like your typical night for a wrestler on the road. If every wrestler that had sex with a drunk woman got the same treatment damn near everybody throughout the history of wrestling would be getting me tooed.

Pretty sure one of them confirmed it a few months ago.

Ishi is injured…. Being replaced by Clark Connors (whoever that is)